Breeding competitive level Pokemon really is not as hard as it seems. It does take a bit of time, but it’s really not that bad. You also almost need competitive Pokemon if you want to stand a chance against the Battle Tree to farm that sweet, sweet BP.

Before we get started though, we need to know a few of the mechanics.

IVs (or Individual Values) are the inherent stats the Pokemon is born with. Think of this as the genetics of the Pokemon. There is a new way of checking the IVs of your Pokemon in Sun and Moon, called the “Judge App.” You can get this app by hatching 20 eggs and meeting a man besides the PC at the battle tree after beating the main story. This will help immensely to see if and when our Pokemon are increasing their IV stats.

Side note: There also is a new mechanic called Hyper Training in the game. I do not recommend using this to train up your common, breed-able Pokemon. The downsides of Hyper Training are that the Pokemon must be level 100 (which takes a very long time), you need a rare item called a Bottlecap, and you cannot breed down the stats onto your other Pokemon (so kiss the idea of maxing out a Ditto and using that goodbye).

EVs (or Effort Values) are stats that are gained from training your Pokemon. Each Pokemon has an Effort Value that is given to the Pokemon that knocks it out. Think of this as the “nurture” part of the nature vs. nurture argument. We will be talking about this more in depth a bit later.

There are several items you will need to breed and train your Pokemon quickly.
– Destiny Knot: Can be found using the ability Pickup, Royal Avenue (48 BP)
– Everstone: Hau’oli City from Ilima, Steal from Roggenrola or Boldore
– Power items: Royale Avenue (16 BP each)

The new mechanic in Sun and Moon is SOS encounters. When a Pokemon feels threatened, they will call for help. The chance of them calling increases the lower their health, as well as when you use an item called an Adrenaline Orb (which can be found throughout the world as well as purchased at the Pokecenter for 100P).

A lot of cool things can be done with SOS encounters, including Hidden Abilities, higher stats, and even shiny Pokemon. We will talk about SOS stuff a bit later.

Sometimes, when a Pokemon calls for help, nothing appears and other times, a whole new Pokemon appears! This Pokemon is considered the “ally” Pokemon. SOS chaining can get us some cool things, such as Hidden Abilities, higher stats, and even shiny Pokemon. We will come back to SOS chaining in a little bit.

So the first step of any competitive breed is to go out and find the Pokemon you want to breed. It will make it easier if it is a female, but that is not entirely necessary. Catch it in the Pokeball of your choice, and there you go, step 1 complete!

One of the things you need to consider is what moves you want your finalized Pokemon to have. A lot of Pokemon can learn moves from breeding that they do not learn from leveling up. Those moves are called Egg Moves. The Paniola Ranch is where breeding takes place.

Hatching eggs is a pain in the butt, but luckily the devs of the game threw this little thing in there. By hopping on Tauros, you can just run continuously in a circle until your eggs hatch! Also, throw a Flame Body Pokemon in your party to cut the time it takes for an egg to hatch in half! 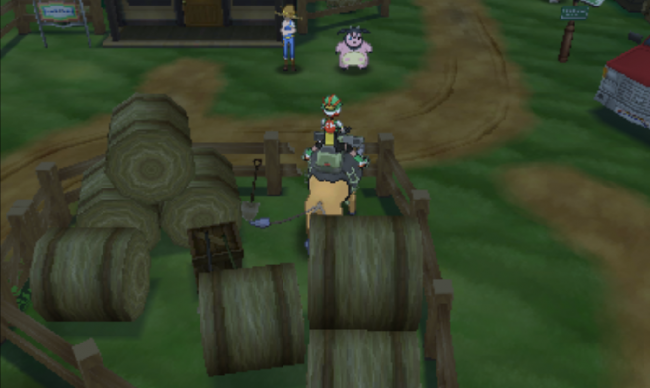 The nursery lady will cross her arms like so when she has an egg for you.

Natures are another stat modifier for Pokemon. Neutral natures do nothing (I know, right? It’s almost like that’s what neutral means…), but the non-neutral natures give a 10% boost to one stat, but take 10% from another. We can actually modify which natures our Pokemon have rather easily.

I went out and caught a Ditto of every single nature. This is probably overkill, but I spend a lot of time breeding, so for me it’s actually quite the time saver. You don’t need to do this, however. You can just find a Pokemon in the same egg group as the one you’re breeding who has the nature (Synchronize Pokemon help find those Pokemon in the wild).

For example, I want my Tsareena to have a Jolly nature, so I’m going to pull my Jolly Ditto out and put an Everstone on it. This is extremely important. The Everstone GUARANTEES that the offspring will have the same nature as the one holding it.

Alright, here’s the tricky part. This part really depends on your conviction to being legitimate. There are a few ways to breed decent IVs, and every one of them requires that you have a Destiny Knot on the parent that is not the one you are breeding (because you need to keep the Everstone on the one you are breeding to maintain the correct Nature).

1. The Normal Person Route: Use 4 IV Dittos: Remember how I said SOS Chaining can be used to get higher stats? If you go high enough on a chain, you are GUARANTEED to get 4 perfect IVs on the Ditto. 0-10 is 1 perfect, 10-20 is 2, 20-30 is 3, and 30+ is 4. If you get 2 Dittos with overlapping IVs (i.e. one ditto is missing Attack and Special Defense, and the other is missing Defense and Special Attack), you can use those to breed your competitive Pokemon. Ditto can be found on Mount Hokulani

2. The Overkill Route: Do what I did. Breed a 6IV parent of every single egg group. It is crazy time consuming and it’ll make you want to die for the most part, but once it’s done, it’s really nice. (And before anyone screams “OH, FANTASTIC ISN’T PERFECT!” I know. It’s close enough, because at LV. 50, it doesn’t affect the stats at all. The only time best is needed is if you are breeding for Hidden Power or if you’re one of those wierdos who battles at level 100.)

3. The Cheater’s Route: Do what I used to do. Get a 6IV Ditto and say good ’nuff. I feel like that was a serious failing of my last guide, and I do feel like I should have expounded more on the legitimate side of things. My bad. I also do not have a 6IV ditto anymore, so unfortunately I can’t help you there. I’m sure /r/breedingdittos can help ya.

So, do one of these, put a Destiny Knot on the one of these you pick, put an Everstone on the one you’re breeding, and go run around like a dingus again.

How does the Destiny Knot work?

6 IV, for the most part, is unnecessary. If you’re building a physical attacker (like Tsareena), there’s no reason to get any investment in Special Attack, so 5 IVs minus SpA would be fine. What I’m going to do is breed 5, check the IVs with the judge app, pick the highest one with the correct ability, swap the mother out of the breeding center for the high IV one, and do it again until I get 5 IVs minus SpA.

Alright, so EVs got a bit more complicated this generation…

Horde battles are no more, but SOS encounters exist now. Every ally killed doubles the amount of EVs gained (including EVs from Power items and Pokerus).

I actually had to make a whole new document to explain the EV gains. You can find it here (There’s 3 tabs on the bottom).

The last step is to get your competitive Pokemon to level 50! There’s a couple of quick-ish ways to gain XP:

– ALWAYS give your competitive Pokemon a rainbow bean before leveling. 2 Affection hearts give 1.2x XP.
– Lucky Egg. Always.
– Bewear SOS encounters outside of the Battle Tree and the Elite 4 give a lot of XP. (E4 gives money too).

And that’s it! There ya go! You now have a competitive Pokemon! Lather, rinse, repeat, and you got yourself a team!