there were a lot of questions about the spotting mechanics in WoWs and even more complaints about invisible or disappearing ships and broken smoke. This post will try to explain how are the ships spotted in WoWs. The information below is provided either by WG officials, the russian ST z1ooo in his video guide for the russian community or other confirmed sources. 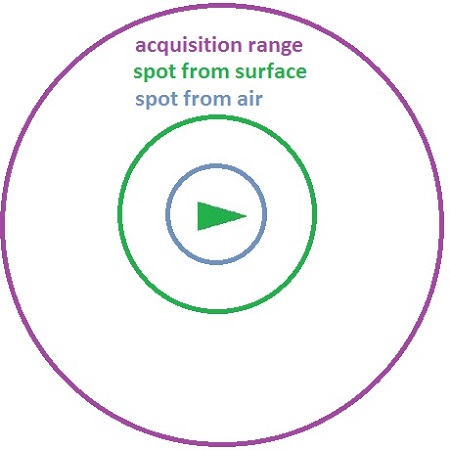 What’s the “acquisition range” you might ask? Well that’s our maximal drawing distance = our view range. That’s pretty much the maximal distance where we can spot enemy ships or we can have them visible in our 3D world. Even if they are spotted from friendly ships, but outside that range we can’t see them rendered ingame, they will be just on the minimap. This range is not showed in the ship’s concealment stats, but you can use the minimap to determine it (the red circle, but it’s not showed ingame). 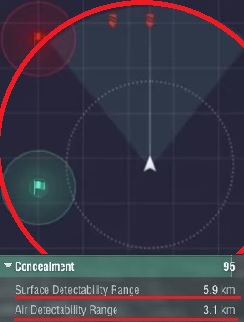 It’s also appropriate to mention the planes here. There is slight difference between the catapult planes and the others who are carrier-based. Their acquisition range is 11km and that’s the maximal distance they can see ships on, but if there is clear line of sight. For example the scout (spotter or catapult fighter) plane can “look down” at 4km and that’s his “proximity spot” – the plane will spot every ship inside that range, even if it’s behind an island. The only exception is the smoke, as they can’t see through smoke. To spot a ship between 4 and 11km they need clear line of sight and in this case it’s important to say that the smoke’s high is almost the same as the scout plane’s high – so to actually spot ships behind the “smoke wall” the plane should be near the smoke itself. The other  planes however don’t have such check for clear line of sight.

The scout planes can be detected from both surface and air at 4km, while the other planes get spotted from 8km. 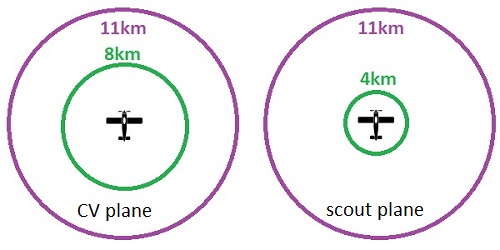 Situation 1: Both ships are far away from each other. Even if they are spotted from other ships they won’t see each other in the game, they will only get marks on the minimap.

Situation 2: The ships are now closer to each other. The DD has spotted that CA, because it has entered the CA’s spotting distance from surface (let’s say 12km) and it’s also inside the acquisition range. The CA should theoretically see the DD as it’s inside it’s view range (acquisition range), but can’t spot it, because the DD’s detection range is 6km and the distance is still 12km. If a plane spots that DD then the CA can see it and shoot at it, but can’t spot it alone, so if the plane is destroyed or gets out of range then the DD is invisible again.

Situation 3: Both ships are now close enough. The CA entered the DD’s surface detection range and can spot it.

That’s pretty much the basics, but what’s affecting the spotting distance? Speed, firing torpedoes, launching plane etc? Nope, the spotting distance ingame is influenced only by 3 things – shooting, fire aboard and the AA guns. After shooting with the main guns you will get penalty added to your detection range for 20 sec. If you extinguish the fire and disable the AA the penalty is gone right away. The shot penalties are different for every ship, but generally they look like this: 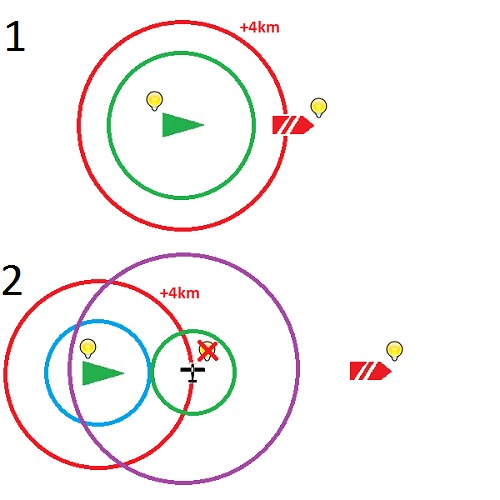 Situation 1: The DD is 9km away from the BB and can’t get spotted, because it’s spotting distance from surface is 6km. However when the DD starts firing it’s main guns a penalty of 4km is added and the DD gets spotted. If the DD stops firing the spotting range will get down to 6km after 20 seconds. The DD however can get 2km back (so that the distance is 11km) and keep firing while staying invisible, because the spotting range even with the penalty is 10km.

But as I said that’s balance parameter and for now it’s not showed ingame. Unfortunately they consider such detailed informations unneeded inside the game, so they are thinking about making wiki-page in the future with things like this. Here are the stats for tier V DDs just as example:

So now we know how are we getting spotted, but is there something we can do to make it harder? Well of course and it’s even vital for the DDs. There is 1 captain’s perk (concealment expertise as 5th skill) and 1 ship’s upgrade in the last slot (Concealment system mod 1). They both provide -10% from the base detection range and they are multiplied. So how is our base 7km spotting distance from surface going to look like with the both bonuses?

Now few words about the more complex matter – the smoke. There are many questions about it, so here is explanation of how it works: 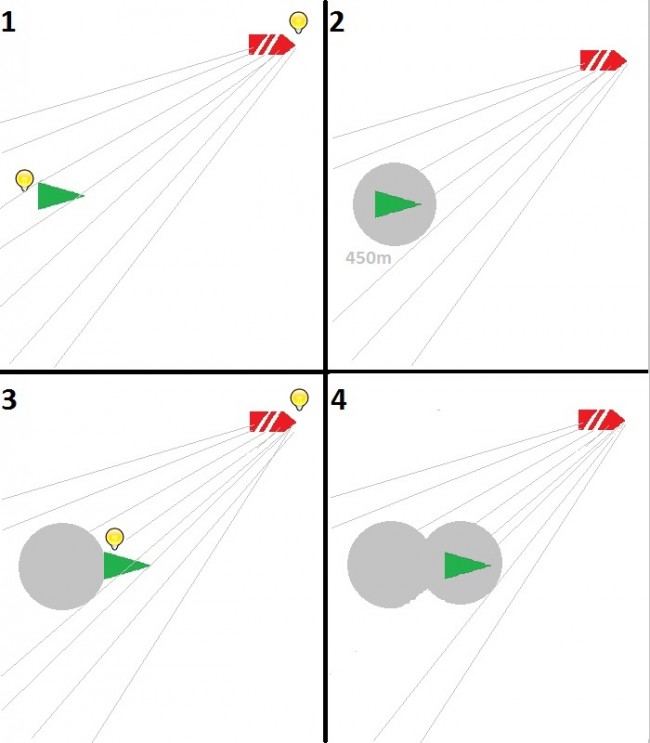 Situation 1: The DD is close to the BB and both can spot each other.

Situation 2: The DD pops up smoke. As you have noticed there is “puff” effect every 5 seconds when laying down the smoke. This “puff” effect creates a circle with radius 450m around the ship. The smoke is considered visually impenetrable like island from both surface and air (the only exception is 2km proximity spot from ships). When inside this smoke circle you can’t be spotted, but you also can’t spot anything. If you see ships then someone else is spotting them (other ships, planes).

Situation 3: The DD is moving so after few seconds it’s leaving that spawned 450m circle. In this situation it’s spotted again and can see the BB too.

Situation 4: As mentioned the smoke is spawned every 5 seconds, so another 450m circle is spawned and the DD is invisible again (and can’t spot the BB too).

That’s the situation when the enemy ship gets clear line of sigh to the DD when it’s outside the smoke. If the DD is moving away from the ship then the smoke (which is visually impenetrable) serves as shield and the DD can’t be spotted while laying down the smoke. 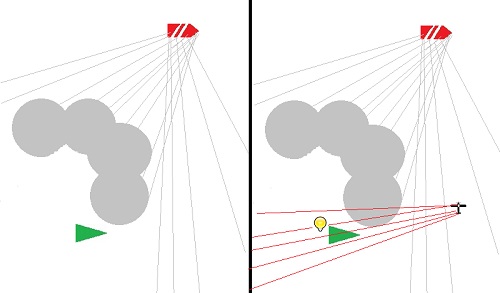 Let’s not forget however that the DD will still be outside the smoke parts of the time, so enemy plane or another ship can spot it.  In such case the BB will be able to see it too.

So to sum it up – the smoke is  visually impenetrable and ships inside it can’t be spotted no matter what (the only exception is 2km proximity spot from ships). The smoke however is layed down every 5 seconds in circle with radius 450m. If the DD is moving fast (more then ~ 1/4 speed) it’s leaving that smoke before the new one is spawned, so it gets spotted. When it’s laying down the smoke at high speeds the spawned smoke circles are not overlapping and there are free spaces between those 450m circles. In this case the smoke is not “thick” and ships can see through those free spaces. And of course as the smoke is visually impenetrable you can shoot from it avoiding spotting. You can even have ship as big as the Yamato inside the smoke,firing it’s main guns, burning and shooting at the planes above him and still staying invisible. The only way to spot such ship is the proximity spot (2km). Cruisers get “hydroacoustic search” consumable that can temporary this proximity spot to 3.48km for ships and 2.52km for torpedoes.

Smoke deployment time is 20 seconds for all destroyers and lasts between 65 and 97 seconds depending on the tier.

It’s also good to mention the “Situational awareness” perk (captain’s tier 1 perk). Unlike WoT’s 6th sense here the warning will be activated without delay and will be active as long as you are spotted. If it’s 5 minutes then the perk will be active all 5 minutes.

At last there are many questions about the torpedo spotting ranges. For now WG is not providing the data about them ingame, but that’s fixed value for each torpedo. There were speculations back in the alpha that it’s range based, but turned out to be speed based. At the moment the detectability range from both surface and air is pretty much the same. There are many discussions about them, so here is complete list:

I hope I was able to clear some of the questions about the spotting mechanics in WoWs.

See you on the Battlefield