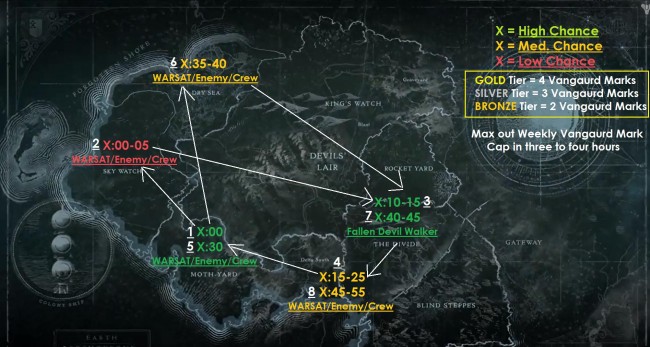 I was able to max out my Vanguard Marks in under 4 hours today while i was farming Public events ive been farming ascendant items for a couple hours every day this way for a few days now. Today i discovered it can be used to max out marks but in order to do this you need to be high enough level to solo the public events on earth, if not need some one to help. This is much easier to do as a party but its not hard to solo just make sure you have arc weapons for the captains. Here is the break down of the hour loop i used

I’m sure there might be better public event loops to do out there but this is the one that i came across. You will get at least 16 marks an hour and will probably average over 20/hr depending on your luck. Either way i figured i pass on my knowledge to others.

a couple of notes:

the kill the enemy before the checkpoint is the hardest of the events and the only one ive ever gotten less than gold. to beat this event solo you need arc weapons because he gets his shield back up very quickly