Well here is another guide for a fun event, if u think u got nothing to do.
My guild and friends have been trying it out to find out what and how it is done. So here is a guide of what i have learnt and what u can learn to do guild battle
This is not like pvp or PK, u dont even need same Lv players on both sides or be afraid that one side has many 9x and u dont but many player in one guild side can make some difference then again this is pure teamwork and strategy.
Note – We havent had enuf time to gather all pics and vids so il be updating it asap when i go for another battle

1st off u all know how to start a guild battle. If not then all u need to do is have minimum of 120 Expansion points(Maidan Qs) and 50g guild fund(not ur own but from fund)

Ok after u have challenged a guild(Guild -> War -> Guild battle -> Start a battle -> Enter the ID of the opponent guild u wanna battle with) then u all need to gather at LY crusades top right corner on LY map. Once u gather u can decide who has to do what and which team has to do this n that. Enter the Ancient Thunderdome.
Once u all Enter both guilds get 5mins to get ready and take places where each team or player has to go.(Can be anything based on teamwork/Strategy) 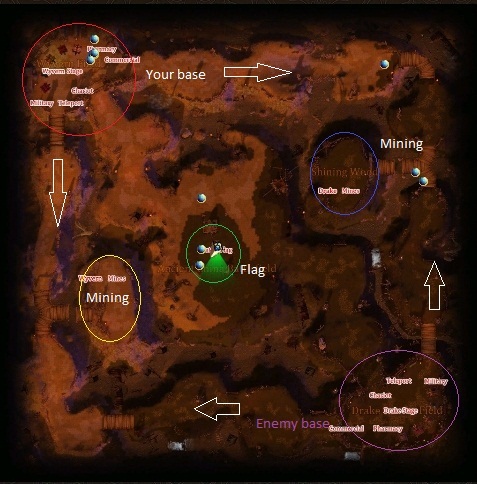 This here is the Map of the Ancient Thunderdome. As i said once u enter u get 5mins to decide where to go and get ready. The red Circle is ur base and purple is the enemy base, Blue and yellow are mining areas and the centre is the flag area green circle.

Now its never smart to just rush into the enemy base from front. There are many towers guarding the front and they do hell of damage and can kill in 5-6 hits. 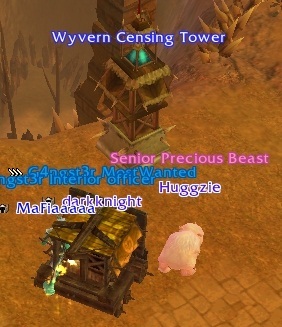 At the moment i can just show u one tower. later il add more. Your Towers can buff u and protect u and buff up ur defences. Tower range is the whole mini map like mins relic. For enemy Tower they can atk and lower ur phy and spi def alot for 15sec. So stay away from enemy towers. In the pic u can also see a tank. They are very very important for the battle. They are the key to victory and u must choose them wisely.

Tanks/Chariots
Talking about tanks/Chariots, they can be obtained from ur base NPC chariot. Each chariot has its own unique ability. There are 5 chariots. Deforestor or destroyer, Spirit, Element, Thunder, and Heavy tank. At the Start each guild can choose 2 tanks/Chariots. These tanks are very hard to kill unless u have another tank to destroy it.

Now for the mining, they are also important. If u are going for mining then remember to have empty inventory to carry ores in item inventory. There are many colour mines but u only need to collect one type of colour that u want. Now these colours are as same as ur tanks. Eg – Lets say the Element tank colour is Red then if u need to get another element tank then u have to collect x10 red ores and get it back to ur base.
The purpose of mining is to get more tanks, the more tanks u have the more chances of ur victory. Like i said at start u can only have 2 tanks but as u collect ores of same colour then u can take another tank of that colour. Il update the pics of mining later.

This is very very important area. Ur base is worth 500 points, so no matter what DO NOT LET IT GET DESTROYED. You can use the heavy tank to destroy the base of ur enemy. And remember never to go in straight up front thru the towers, they can destroy ur tanks slowly b4 u reach enemy guild. Instead go from left and right of ur base to avoid the towers and enter the enemy base. Once u destroy the base the u dont have to stick around there and go for enemy players or flag. il update some pics of each base later.

Its simple, the guild with most points wins! You can click on the S icon on top of ur guild icon to check individual points, guild points, enemy points and number/type of ur tanks and enemy tanks.

Apart from the announcement that ur guild has won. u get Titles like Super killer(for most kills) Flagman(for capturing flag) etc and 100 honour points(they can be traded for items or guild contribution) each battle victory u get 100 points. and for 100 points u can trade awesome rare items. Check it out under the Crusader NPC. 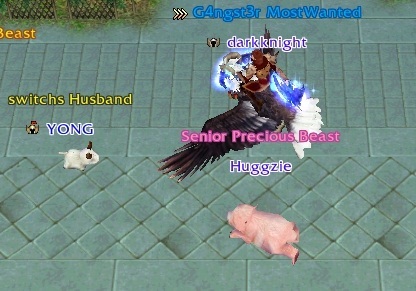 Apart from humiliation and that big announcement. The losers are turned into goats (as seen in pic)
You have to walk all the way thru LY west and east street to SY portal where u can find a NPC who can change u back to normal.

Last the Guild battle is for 1 whole hour. So be prepared with no lag and good connection and no power cuts unless u wanna see ur guild lose hehe.