– This guide is not fully done, I will add some pictures and maybe edit some things depending on the feedback
– I do realize I skipped a bit “how to get there” explaning, but I plan on adding map for that.
– I also know that there already is a one TV guide here, but main reason why I posted this is the fight with 5th boss, which is not detailed in the other guide.

Twilight Village is the first forbidden instance you will come across during your travels in Age of Wulin. (this guide is for normal mode)

In this instance, you can get:
– Goose flying skill (Gives great edge in pvp, instant slide to get away or close-in)
– Ladder flying skill (Allows you to climb walls, great for escape)
– Iron and rarely copper recipes, manuals, scores and other life skill stuff
– About 300 bound liang (Hey, some life professions do need it)
– Coarse Cloths and Linens
– Jackdaw Herbs and stuff nobody cares about (like seeds)

The Entrance to the village is in Suzhou (picture will be added later), once you enter you need to talk to Grandma at the docks and ask her what happened…

Entrance in Suzhou (Either swim there, or talk to boatman circled in red to get there): 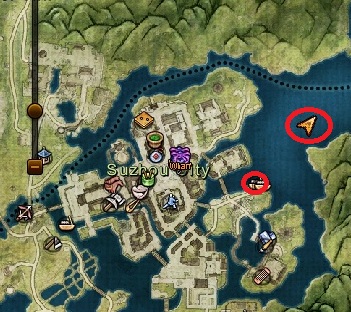 And here goes the map of instance with a legend and main locations pin-pointed with my super MS paint skills: 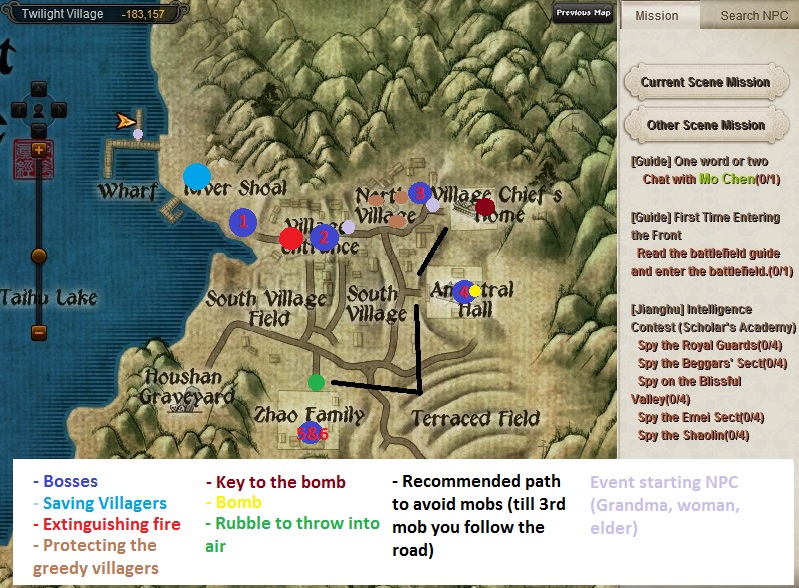 Your first task is to save 10 villagers running out of the burning village. While they run out, 2 mobs will spawn to kill them. Obviously, you need to kill these, the problem is however, that villagers are so brave that they will decide to attack the mobs too. That is why most people prefer to lure the mobs to side (near the sea) so the villagers wont attack them and run straight to safety. This is optional however, especially for higher level groups where killing the mobs right away is simply faster.

After you have saved 10 villagers, a boss will spawn. This is a fairly easy boss, the only thing you need to do is break his parry as soon as it is up. If you do not break the parry, he will gain buff that gives him +100% damage, which is stackable. This is how he can one shot some people. But if you break his parry, you are safe.

This time, you need to pick up a bucket from ground (near the burning houses) and fill it with water (in the sea, right outside the gate) and finally pouring the water on the houses (simply right-click the bucket in your inventory when near the fire).

After all buildings are “safe” (burned to crisp, but still standing) a boss will spawn. He will use mainly two skills, one will spit out fire from his mouth and the other will make fire on the ground, just do not stand in the fire and you will be fine. If you start burning, either go into sea or get someone to pour water on you from the bucket (after the fight, it is not deadly).

Villagers cry that they need some belonging back, so it is up to you to protect them. First clear the whole area off mobs and then talk to NPC located on the path from burning houses to the next part and trigger the event. There are three spots with chests that villagers will run for. It is fine if you protect only one or two spots. This is the most tiring and boring part of TV. After villagers take all the chests (or die carrying them) a boss will spawn.

This boss will get 1-3 assassins (real players) to help him, so you need to assign one or two people to keep them off you while you kill the boss. The boss is actually soloable, it just takes a while. If you happen to fail, you will be prompted if you want to weaken the boss or lessen the number of assassins, so with enough patience, you will eventually kill him. Also, this boss can grop both goose and ladder, so aiming for good score (highest I ever got here was B) is a good idea!

Now there is this girl almost being raped in one house, what you should do is open the gate, lure out the two mini bosses, kill them, lure the main boss, kill him and clean a path to the house. There is not much to add, just watch out for the ranged mobs with darts, they hit quite hard. If you have trouble, jump on roof and they will stop hiting you.

Fifth part: The “do not use parry breaks rumor” boss

This is the main reason why I write this guide, as many people misunderstand how to fight this boss, nevertheless…

After you’ve killed the fourth boss, one person needs to go back to where the 3rd boss was, talk to elder and follow him. He will open a hidden place in his house behind a writing and you can get a key (do not forget to pick up a torch near the fires). Use this key on a crate below statue in the house where the girl was supposed to be raped, pick up the explosion and hurry to the last boss. Clear the mobs, lay down the bomb, lit it and BOOM, watch the never-so-lame explosion.

This guy has about 200 MP and is completely MP-dependant. If he has no MP left, he will just stand there watching you stabbing him. He’s got some abilities to watch out for:
– Single target slash (kind of our basic attack, but it eats his MP too)
– Sword of Chi (or something like that) – drains MP from surrounding players, good to dodge
– “Wudang’s horse skill” (translated as Hidden Dragon from chinese) – Switches his MP to HP
– Parry – if you hit his parry, he will regain MP (considerable amount)

So, where’s the catch? 95% people who go with you into this instance will go into “DO NOT USE FEINTS” spree and justify it by saying that he will heal, but that is not true. It is the opposite. This guy heals when he can – that means when he has got MP left. So basically, by not breaking his parry and happily hitting his guard, he will recover MP and use his heal just as much as he wants (well, not literally, the chance to use the heal when low on health is not 100%).

So here is what you want to do:
– Break his parry all the time, never hit his guard
– Get mana-draining poison on your weapon, the cheapest one is enough, he’s got only ~ 200MP

If you kill this boss in time, congratulations, you have finished the instance. If not, 6th both will appear.

Sixth part: “Why are you doing this to me?” (boss line)

This boss will use three skills:

– AoE silence skill “Lament something”, you want to dodge this or you will get useless for some time
– Binding Chains – he will bind the tanking person by chains, making them unable to do anything but watch their character die. To prevent this, you need to double-click them.
– Tornado-like AoE – very wide AoE that does not really hurt that much. But if you are squishy, you want your tank to pull him into corner and you need to run the opposite direction. If you are not squishy, you can just keep on hitting him till he die.

Hard Mode of Twilight Village has basically the same fight strategy as normal mode, with just a few modifications, for map of run, refer to the normal mode one, it works the same. These changes incurr in hard mode:

This task is the same as normal mode, but instead of simply luring the mobs to seaside, you need to check is the villager is adult or a child, because they run different paths. (one by sea, one by the hillside)
– If it’s a child, lure the mobs to the sea
– If it’s an adult, lure them to the other side

The boss is the same as normal mode, with the difference of boosted damage and HP. You really want to break his parry all time. otherwise he would stack damage buff and kill you instantly. You want to use feint and an array attack skill. You use rage and other attacks too, but make sure you will NOT hit his parry (for example use it when the boss is stunned).

Again, all same as first part. But if you are lower level or do not have much of crowd control / damage, you might want to fight less mobs while clearing the area out. That is because the high damage / HP. After that, put out the fires on buildings.

The boss skills are the same same as normal mode, do not stand in the fire and use feints. The difference however is that the assassins spawn here so you want to assign some people to keep assassin off you while you kill the boss (I recommend 2).

Completely the same as in normal mode, but do NOT lure many mobs at once while clearing the area, these guys really pack a punch and last quite a while before they die. After the area is clear, enjoy the old and tiresome part where you protect the villagers picking up their useless stuff.

A little different from normal mode, there are no assassins and you get to fight the boss only. He has high HP and damage, but it should not pose any big threats.

This is another place with assassins. What you want to do, is lure the two mini bosses out to in front of the gate and kill them, after that you need to clear the whole area of mobs and when all this is done you want to fight the boss. You kill the mini bosses first because if you killed the mobs first and somehow did not make it within 10 minutes you would have to fight both mini bosses, boss and assassins at the same time.

Also, some people close the gate first, kill off all assassins and then assign one person to keep the gate closed (like using AoE attacks on it itself so anybody behind it can’t open it). That is because the assassins spawn outside the gate after they die. I myself woul probably not choose this tactic, but you might try if it works for you.

After this, pick up the bomb as in normal mode and proceed.

This part takes place at the spot where you lay the bomb. As in normal mode, there are two lines of mobs, but each line is accompanied by boss. What you want to do is make one player hit the boss, run back a bit and make others pick aggro of the mobs (but not boss!) then the player who attacked the boss will reset the boss and group up with party to kill off the mobs. After that, you will kill the boss and do the same with second lane off mobs + boss.

After this, lay down the bomb and proceed on last part.

These two boss fights are absolutely the same as normal mode. And again, the only difference is the HP / damage boost the bosses have.

And that is basically it, thank you for reading my guide.