Hello all! My name is ZenocideGenius! This is my first build I have ever submitted here. This build revolves around a very unique mechanic “Dodge.” I am most known for my completely out there unique builds but this one I had great success with and was lots of fun. 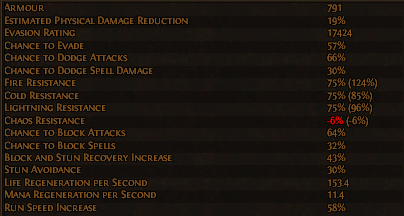 First things first, this spec is very gimmicky. It revolves around both frenzy charges, Darkray Vectors, and lastly the good ol’ Vaal Orb. I recently hit 90. My specs listed below will both be pathed out to level 90.

Prior to the release of SoTV you were only able to obtain a total of 8 frenzy charges. With the introduction of the Vaal orb you can corrupt +1 to Max Frenzy charge to both boots and amulet. Obviously this requires a bit of success and luck to get something like this. Thankfully Darkray Vector’s and Stone of Lazwhar are extremely cheap (well at least now they are.)

The point of this spec is to utilize all 5 types of avoidance in this game. Block, Spell Block, Dodge, Spell Dodge, and Evasion. It is a fun DEFENSIVE spec that can still deal quite a punch. I currently deal 26k tool tip DPS with my Frenzy with Melee Splash and LGoH in my 6L.

My links are Frenzy – LGoH – Multistrike – Melee Splash – Melee Physical – Melee Physical at Full Life. This is because I am using a Soul Taker and because I RARELY receive damage and if I do I currently have 15.83 atks per second, LGoH instantly refills my HP. I’d say 90%+ of the time I am full life if not more.

Before I go into linking my spec I would like to go into full detail how much frenzy charges actually provide to you in this spec.

Frenzy Charges passively provide 5% Cast Speed & 5% Attack Speed in this spec they give other percs from gear and spec.

From gear they provide:

From the gem the provide:

From the skill tree they provide:

Here’s my current spec. This is for me the most optimal way to run this build for damage and survivalbility. This passive tree I would uitilize only if you have a Soul Taker. The way I ran this build prior to it was using swords with the blood magic gem. A link to that version will be listed below.

In the event of not having a soul taker, use swords and blood magic gem and swap out Melee Physical at Full Life. My spec planned was this:

Let’s discuss why I use some of the gear that I do. First off, Daresso’s Defiance:

This item allows an additional 6% dodge, paired with the 20% dodge from Darkray, and the 40% from the tree. This chest allows you to obtain a total of 66% dodge. It is possible in this game to achieve 68% dodge if you corrupt 4% dodge on your boots, however, an additional frenzy charge is far worth the 2% dodge cut. Daresso’s Defiance also allows you to obtain onslaught. Though you rarely receive damage, when you do you have usually a 12% additional reduction to physical attacks. This believe it or not is fairly handy considering with acrobatics the armor you receive from this chest and darkray is cut in half by Acrobatics. When you take a hit you gain Onslaught which provides 20% movespeed, atk speed, and cast speed. With Onslaught my tool tip DPS reaches 27.5k dps.

This neck isn’t a must but I highly recommend it. Other who have seen this build (I stream it quite a bit) have taken the anvil with rathpith approach. Granted this set up gives a lot of block and spell block, but you lose attack speed, move speed, and A LOT of evasion. The amount of evasion you get from a shield in this build from evasion/dex/shield defense nodes is the most you get from any piece of gear EASILY. In terms of preference Stone + Eva Shield > Anvil + Rathpith

Bandits – For bandits I chose to help Oak in Normal for HP, Oak in Cruel for Phys Dmg, and Kraityn in Merc for the obvious +1 Max Frenzy Charge.

Auras – I use Hatred because of the massive amounts of physical damage you gain from Frenzy it’s a no brainer, and I use Grace because well Evasion.

Curse – I prefer Temp Chains (paired with blood magic) to Enfeeble – Despite lower the enemies overall damage dealt and accuracy I feel Temp Chains paired with Soul Taker’s/Hatred chill makes the enemy take at times 6 seconds to even get an attack off. The slower they attack and cast I feel is more of a damage reduction then enfeeble’s lower accuracy/less damage dealt.

Smoke Mine can be used with Blood Magic Inc Duration/Inc Aoe if you want to blind the target for extra chance to evade.

Lastly for mobility I use Leap Slap paired with Faster attacks, if you are using swords because you do not have a Soul Taker You can run Whirling blades faster attacks blodd magic, or Leapslam still but include the blood magic gem.

Vaal Grace – Even though it isn’t out it will cap your dodge at 75% and nearly cap your spell dodge at 70%.

Vaal Haste – This pairs well with the 58% inc run speed through gear/talents as well as my ~16 atks per second. I would prefer Vaal Grace over this option however.