Nothing much to say, I just want to share my build to the community. Yes, my character name is lilyfever and I’m a flame base sorc/bard come from Hydra.

II. Why flame base?

1. As state in other topic, main dps of sorc come from dot, that’s true. But you can maximize your dish out damage with flame impact also. At 40% speed, Flame impact has the same cooldown as the overated-skill meteor shot at 50% spd (1,8sec), movable casting animation (not need to jump-cast), helpful in stacking big game hunter and pretty good damage (135% amplifier, I don’t really believe how people do the math of this, but let it be, none of us can understand the developer minds). The only minus is flame impact is a line not aoe skill, so you need to snare the target first before casting it using binding arrow.

2. Level 65 coming with Zaahir accessory set, which give 24% bonus damage to fire skill and an overall 30% attack again flame target. This accessory set broke the game mechanic for now as it favour wizard too much. But remind that we sorcerer have flame impact, also a fire base skill, so we can say that this set also share a little love to us sorcerer, grenadier and ravager.

3. Here is my current stat: 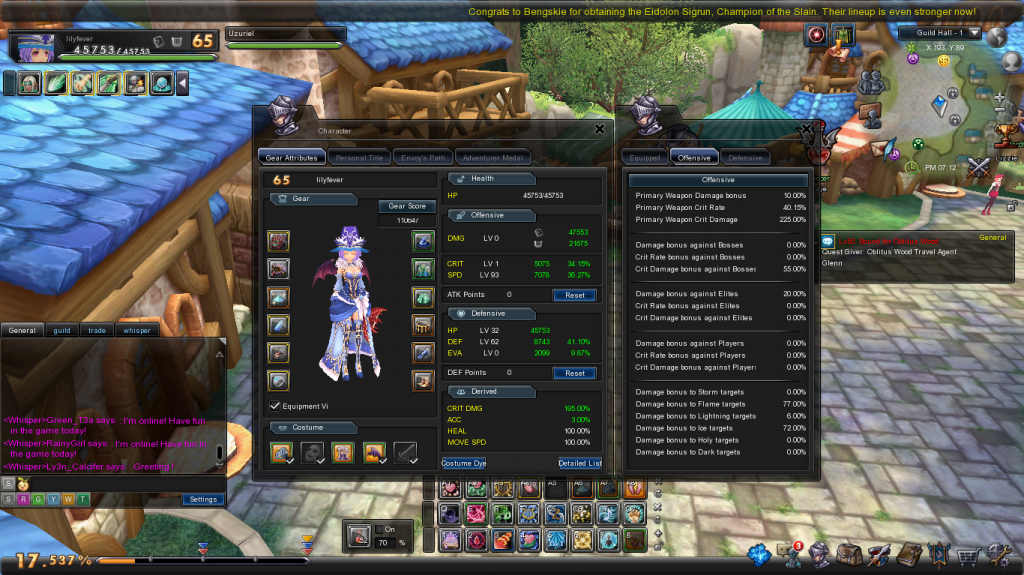 Why speed then?
Firstly, you need to pump speed stat to at least 30% speed for 0.8s/tick. Personaly, I pump my speed a little high to play as the role of main healer in my party (equip with Zaahir harp can pump my speed to 41%, the rest 9% from gunslinger buff).
The rest of the stat point can go to crit to further boost your crit rate or damage to boost your overall damage as well as dot damage (not confirm, any one can test please).
For defensive, my suggestion here is pumping on def and hp, you can either do 2def/1hp or 2hp/1def, this at least can make sure you are barely alive if got hit by Zaahir’s meteor at higher hall and high hp can make you feel safe sometime (lol).

4. Equip:
a. Armor
You can either go for full set of aria or like me, use the elemental upper gear (lv55 green gear). Upper aria gear give you more speed while elemental upper gear give you more crit.
b. Accessories + Cloak
Zaahir is your love, 24% damage boost for flame skill as well as 30% damage to fire target, not to mention high damage, def and hp boost
c. Trophy
Make an yellow toto (15% crit damage is godlike)
The second trophies can be a rotation between orange argus and orange fia. Argus for the trigger of 20% crit damage while mob clearing, and fia is for 25% damage to boss.
d. Weapon:
Since only Zaahir come out as lv60 weapon, you have no choice but go for it. Make both Zaahir book and harp. If you plan to go to abyss, find a harp that give 30% damage to flame target (even better if that harp also give 15% crit damage)
e. Secret Stone (Sigil)
Destroying Secret Stone is the love of every dps class, include flame base sorc. The higher your crit dam is, the bigger damage your flame impact can do with crit. 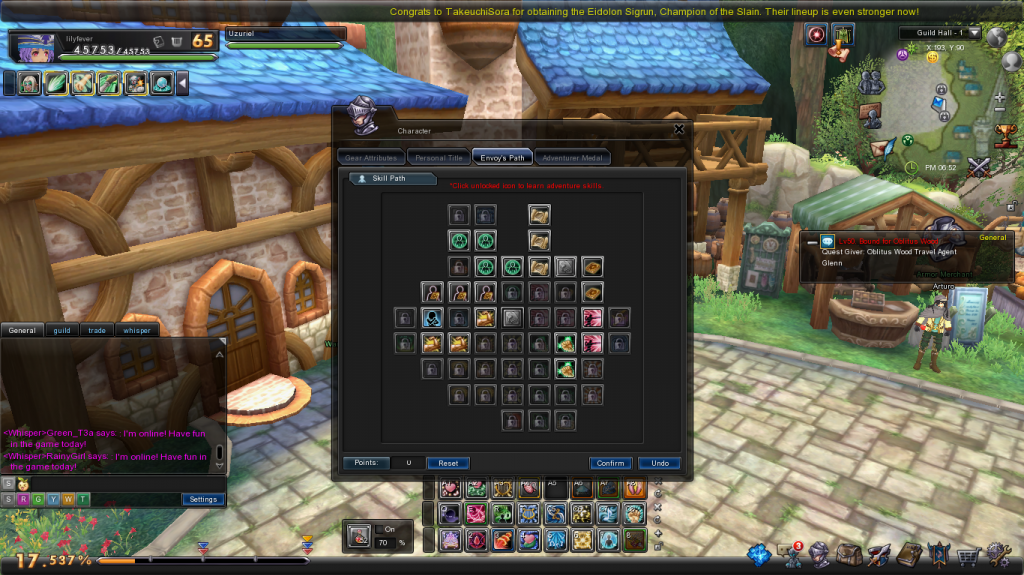 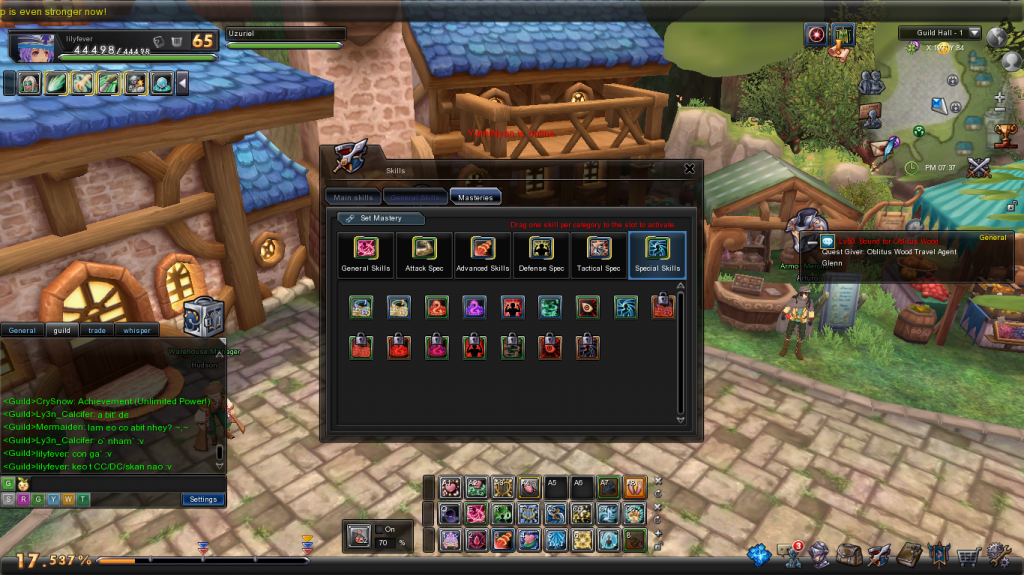 1. Pvp base is pretty broken now since everyone pumping their weapon and not their armor. In 60’s pvp, every class can get one shot by other dps class except guardian and bard, even those with eva build if their opponent’s Acc is high enough. I don’t want to argue with the eva build in pvp but let me say that in pve wise, eva is only good if you know what you have to do since boss’s skill is hardly miss and eva build is really squishy (those who with 95% eva and still stay in red circle is out of question). My suggestion here is pumping on def and hp, you can either do 2def/1hp or 2hp/1def, this at least can make sure you are barely alive if got hit by Zaahir’s meteor at higher hall and high hp can make you feel safe sometime (lol).
2. Your rotation skill for pvp will mostly like this:
– Rejuvenation Mantra  Nightmare totem  Corrosive arrow  Flame Impact
– Then repeat
This rotation will dish out maximize damage for your flame impact while save your *** again some sneaking melee try to approach you.
3. Don’t try to play 1v1 with those range class with stun, you’ll be nice meat for them, bully those melee is your safeplay. 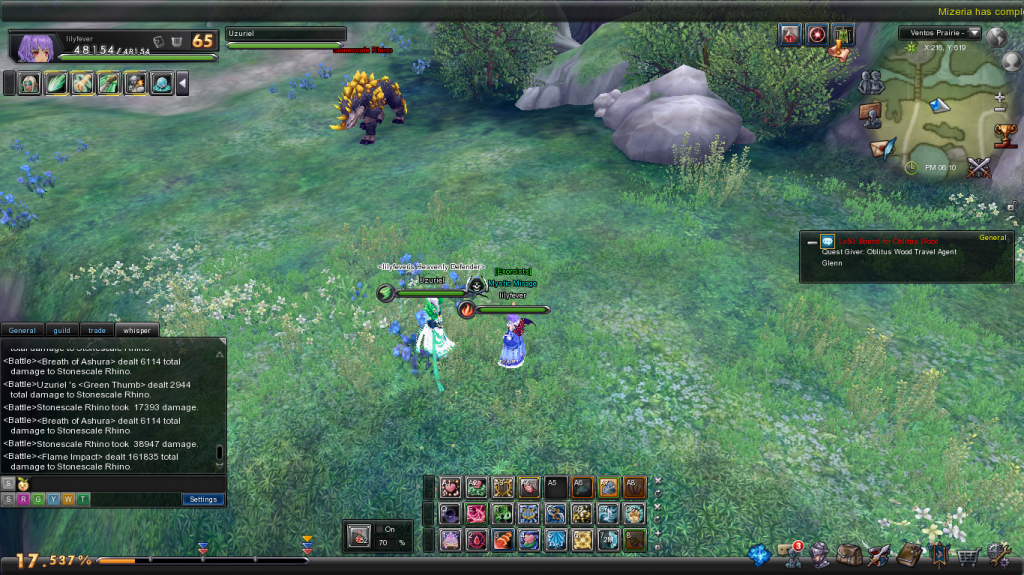 That’s all for now, I’ll add up more info when I feel need or when 60 content come out