A great storm has erupted within the Jianghu world of Age of Wulin. The scattered Wuxia factions are at each other’s throats, striving for dominance in the never-ending struggle for hegemony. As disciples of your school, you can help the clans settle their differences…on the Battlefield!

Two battlefield modes, Faction Confrontation and Death Mode, are available for players. Within the first 15 minutes of battle, you must kill as many enemies as you can to obtain killing points. If you die, you can choose a nearby place to treat yourself, and then revive yourself at one of the randomly distributed revival points on the battlefield.

All players who have moved up from novice protection and are not in any other Jianghu event can join the Battlefield battle by enrolling as an individual. By clicking My Battlefield and opening the Battlefield queue interface, players can freely select the battlefield they want to join. The queue can be joined, as long as the necessary requirements have been met, by clicking on Join Battle.

In this mode, a 6v6 Ancient Tomb Sect Battlefield and 12v12 Muyun Village Battlefield are provided. Participants can freely select a faction to assist and win the battle by killing enemy players.

On the Battlefield, players within the same faction must cooperate with each other to defeat the opposing team. A victorious team is decided either when one team meets the required kill number; or when the 15 minute mark is reached, in which case the team with the higher kill number wins. 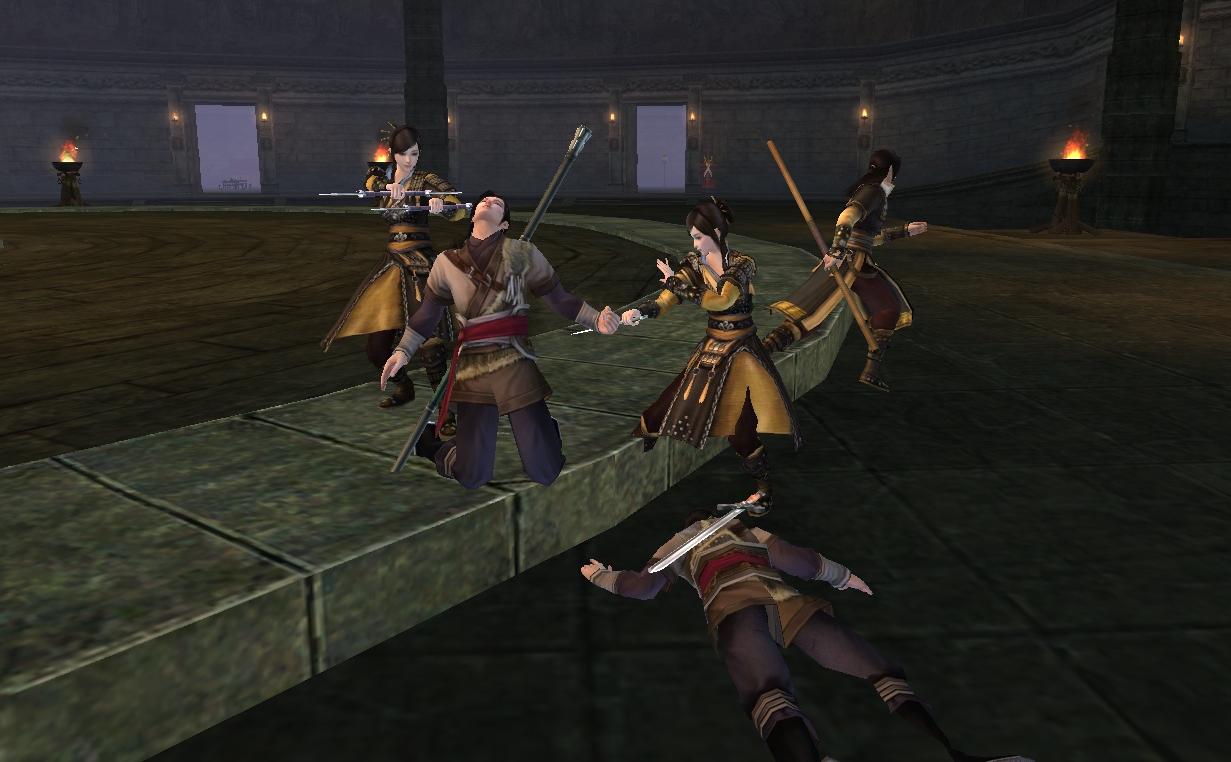 Unlike Faction Confrontation, Death Mode features a free-for-all brawl which takes place on the 12-person Ancient Tomb Sect Battlefield and on the 24-person Muyun Village Battlefield.

After players enter the Battlefield as individuals, they may attack each other to obtain personal kill points. When the battlefield time expires, the system will count each player’s kill points and distribute rewards accordingly. 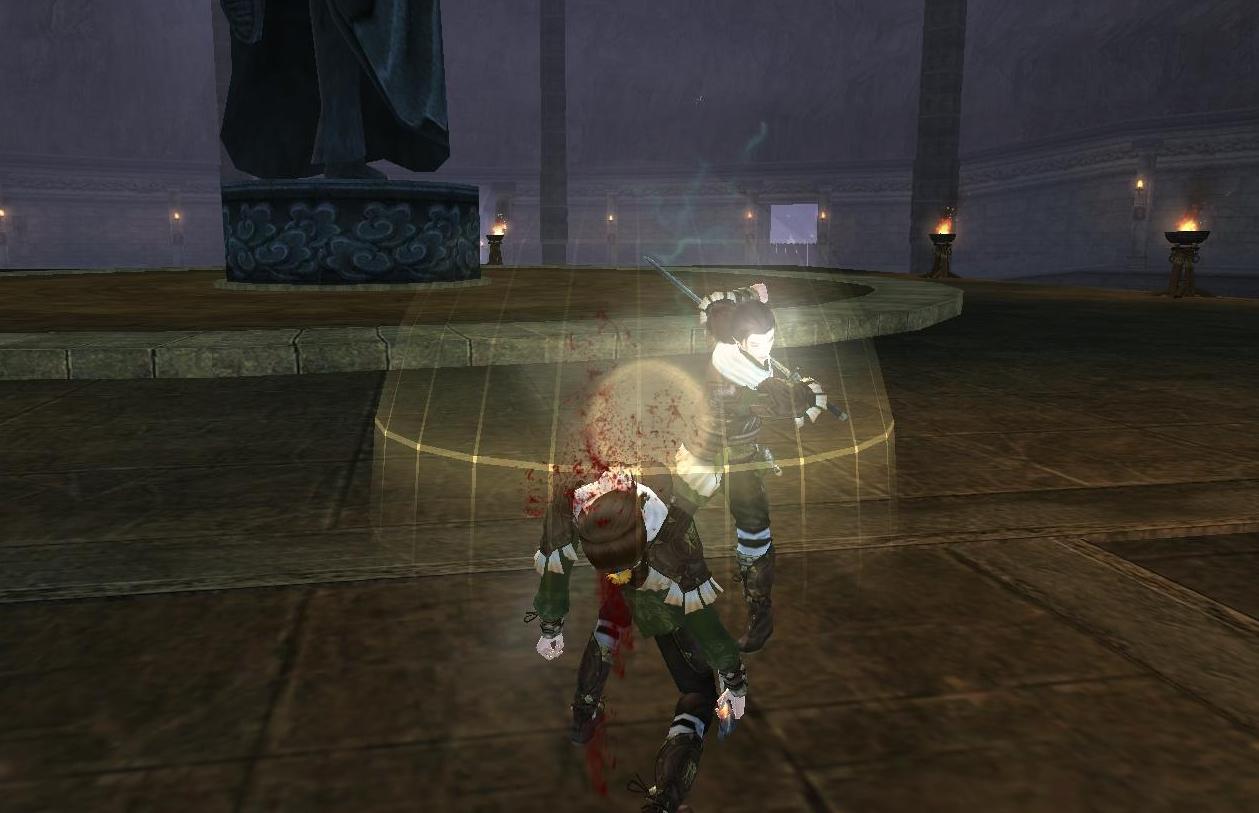 On the battlefield, kill numbers can be viewed by clicking on the Battlefield icon on the small map. The Battle Records interface will pop up once the battle ends and here battle performances can be viewed: the system will provide specific faction likeability and Battlefield points as rewards dependant on performance. 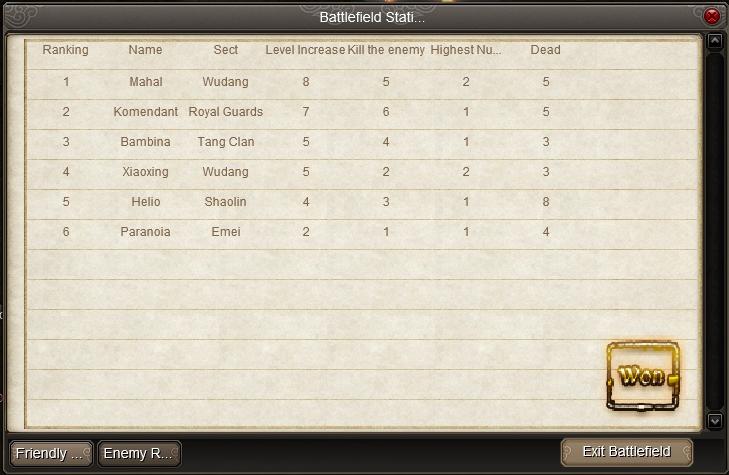 After leaving the Battlefield, players can check their battle performances by clicking on the Battlefield Records in the My Battlefield interface. These include data such as win and loss times in confrontation mode, the number of times the Secret School Expert has been killed in Death Mode, total Battlefield points, faction likeability and so on.
Reward Items

After joining several battles and accumulating the total battlefield score and likeability of the corresponding faction, players are awarded with varying amounts of Qi depending on their overall performance. Continuous wins will land you a spot on the Ranking Battlefield list’s Jianghu Celebrities Record. 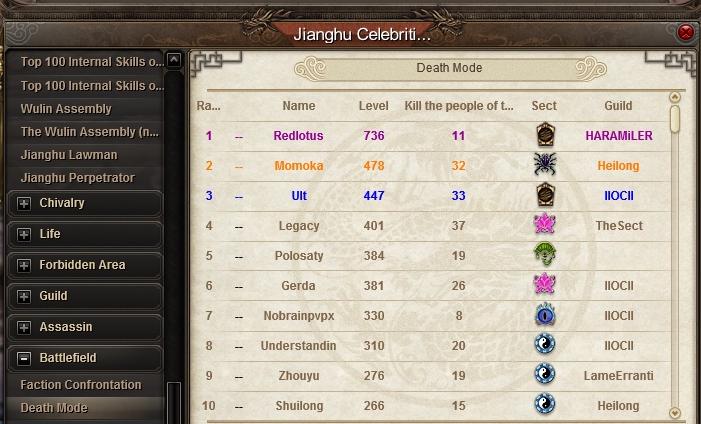