Cons
———–
Turning Ability (Even though the turning is actually quite good its mediocre when compared to other planes)
Low 30mm Ammo (G10 & K4)
Low Cannon Velocity (30mm)
Looking at that Pros and Cons chart the Pros out weigh the Cons. Knowing your aircraft is the first step in becoming better with your aircraft.

Evasion being one of the most important things in a dogfight. Quite simply evading an enemy is more than just a turn, an evasion can be an offensive and defensive maneuver at the same time. Which all pilots should know.

Now after watching the video. I’m at a lower altitude than the F8F. Keep in mind I’m not dead just because he has a higher altitude and diving away is the worst thing you can do in this situation. After spotting the F8F I kept my speed above 300 km/h and then once F8F was about .8 km out. I dropped combat flaps and did a hard turn he followed. Utilizing my roll rate I quickly changed in directions. I then cut my throttle for a half a second for him to quickly overshoot me. Giving me a perfect deflection shot. (Unfortunately this did not kill him even though a 30mm did strike his aircraft).

Again what you should never do.

– Dive Away. (Unless you really have to)
– Have a low energy and speed when being dove on.
– Go vertical when an enemy is on your six.

What you should do

– Utilize your 109’s roll rate to avoid incoming shots.
– Learn how to control throttle (I’ll talk about this later)
– Always keep the enemy guessing in which direction you’re going to evade.

Climbing in War Thunder with either the K4 or G10 you want to maintain a high speed. Roughly ~280 KM/H IAS. Climbing at that speed you will usually have energy advantage and altitude over your opponent. 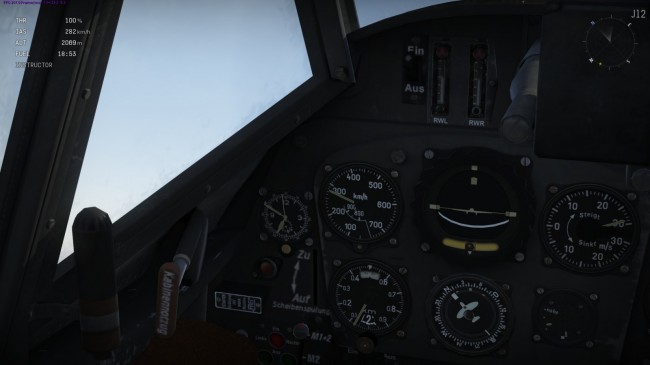 The K4 and G10 are really nice when it comes to this. They have a huge diversity when it comes to weapons or bombs. But I caution anyone who takes gun pods or bombs on their 109. Your flight performance will be affected greatly depending on what you take. The two 30mm on the wings on the G10 for example will make the plane sluggish at low speed because of the extra weight, and will affect turning and climbing by producing drag.  But with that you gain a much more powerful armament that can be useful for ground attacks or against enemy bomber formations. As well as giving you more ammunition to play with before you are forced to land. 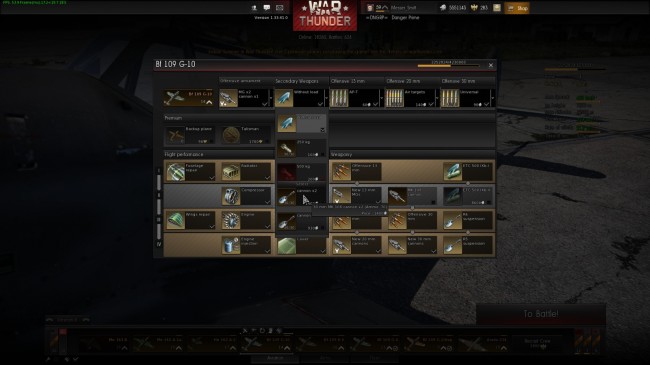 13mm MG’s I would recommend running the belt Air Targets

20mm I would recommend running the belt Air Targets

30mm I would recommend running the Onmi-Belt or Universal

How much fuel should I Bring?

I always bring 30mins a fuel you never know how long you will be out flying and War Emergency Power (WEP) eats up a lot of fuel after a long periods of use.

Dog fighting is one of the most difficult things in this game to learn how to do properly. It’s much more than what your aircraft is capable of doing. You need know the cons of your opponent which will take time and practice. But I will provide you a short video of dog fight.

Even though the pilot in this video is quite poor at flying. I use many vertical maneuvers to evade him. Utilizing my better climb rate, energy, and speed.

In this video I utilize my superior climb rate and energy retention to climb away from the Spitfire MK9.

At the peak of when I begin to stall I cut my throttle to 0 (I have auto throttle control turned off in instructor settings) so I began to dip my noise down quicker. I quickly switch to combat flaps to give me better lift. And in the end it doesn’t quite work out well for the Spitfire.

Attacking head on against enemy aircraft is taking a gamble. Either you damage him or he damages you or both. Doing head ons for the 109 is very important to know. You have the upper hand because your guns are centrally mounted so utilize this to your advantage.

After watching this I shoot around 1.5 km out. Raise your crosshair above the enemy plane a little bit. Fire a few bursts and then utilize your roll rate to avoid his oncoming fire.