In this guide I will not go into a deep explanation of why my stats are what they are. There is plenty of information out there on soft caps, best balance/use of stats. I am following the same information as everyone else should be. I will add one thing however, when it comes to focusing on stats a CW is gearing up here would be my suggestion of what to do first
#1 3K Recovery
#2 3K Crit
#3 2K ARP

Building up in that order to your end game PVE build would first make sure you have effective mob control by getting to your soft cap in recovery, followed by increasing your damage in the most efficient way. Where is power in the list? You should have 3K+ power just based on gear alone. It will build up naturally and you should not have to enchant for it.

Powers & Feats, I will first breakdown my build, then follow with explanations, hopefully this keeps things easy to follow if you are copying my build.

Powers (Only listing MUST haves, there will be extra points you can assign by personal preference, should be 3/3 in all listings)
Magic Missile, Chill Strike
Conduit of Ice, Entangling Force
Arcane Singularity
Repel, Chilling Presence (now optional)
Chilling Cloud (now optional), Shield, Evocation
Storm Pillar, Ray of Enfeeblement (Storm Pillar should have 1 point minimum. If following my feats, should be 3/3)
Ice Knife, Storm Spell
Icy Rays, Steal Time
Eye of the Storm

AOE Damage : The bread and butter of AOE damage is the renegade side of things in combination with shield management. With large pulls and lots of mobs, a large portion of damage we do will come from shield crits. You should have Magic Missile as your main at-will helping you manage and control your arcane stacks. Followed with 1 of 2 builds:
Max DPS – Chill Strike on tab, COI, steal time, shield (I really only run this build with 3 CW’s in a CN party – I just love the constant singularities of the other spec with solo-2 CW’s)
Normal – Tab Entangle, COI, Steal Time, Shield

Shield is our #1 damage, however the worst thing you can do is run into a bunch of mobs and pop shield with no arcane stacks off the bat (unless you desperately need the AP for singularity). This is going to most likely leave you with a larger shield timer and ALOT of missed damage output. Make sure you have decent arcane stacks before using shield the first time on a pull, which helps you get into a shield rotation on large pulls you should be able to pop your shield with no cool down except the cast time, once you get good at it.

COI – Short cast time, and if it crits on the initial cast, does an absolute TONNNNN of damage with perfect vorpal. This should always be cast on groups of mobs, and if it crits do not hesitate to follow it immediately with a TAB entangle to suck the mobs in and ensure they are all taking the damage.

Steal Time – Another high damage AOE, but should be carefully used based on the situation, when used properly since you are going to have aggro on ALL mobs in a trash pull after a crit shield, it is best used to keep you in the fight and allow you to get a shield cast or singularity off (without having to dodge damage nonstop)

Storm Pillar – If you don’t already know it, Storm Pillar allows a CW to charge his AP while out of combat. This is a must have in CN, as this allows us to start most major pulls with our daily. On top of that, when you put 5/5 in Destructive Wizardry, it gives you a huge damage boost when used appropriately throughout trash/boss fights. Its damage itself is garbage; however the 10% damage boost to all your other abilities makes the cast worth it when everything else is on cool down. This takes practice to take full advantage of the feat effectively, and you may want to skip it all together if your just starting out.

A common way a massive trash pull should be the following:
-a magic missile combo (getting an arcane stack)
-arcane singularity (starts sucking mobs in, should be done against a wall or in a corner to make shield spam easier on yourself and group)
-Storm Pillar cast hitting at least 2 mobs to proc the 10% damage boost)
-Possibly another magic missile combo if the situation allows it or you havent proc’d anything yet (eye of the storm, nightmare wizardry, etc)
-COI cast
-Tabbed entangle
-Run or shift in for your first big shield
-Steal time
-You should easily have proc’d your next singularity at this point which you should immediately cast
-Shield spam over and over on timer. Steal time is best used as the singularity finishes, to allow you to safely get shield cast back up and used again.
-When all your abilities are on cool down, cast 50% storm pillar charge again to keep the 10% damage boost up as much as possible)

Tab Key: Icy Rays / Ray of Enfeeble (If your only Wiz or the other wiz is not doing it)
COI
Chill Strike
Shield (If using ROE, replace this with Icy)

I like the combination of those 3 for boss encounters. You get good chill stack generation, the tab’d icy rays usually crits for 9K+, however as mentioned above if your the only wizard or for some reason the other wiz is not tabbing ROE, I would put that in, and slide Icy Rays down to regular encounter.

This setup I use in boss fights where I can actually focus the boss and do not need to worry about mob control. If mob control is a big part of the boss fight, do the following:

This still gives you great AP regen, the standard ROE debuff to keep up on boss and a lot of damage on the adds.

Utility: No other option really here but Dark. Faster move speed good for everything.
Defense: I personally go radiant. High level savage would be best for the build.

Because of my Perfect vorpal, i run Eye of the storm hands down, even though the proc’n of it can be kinda flaky. For trash i compliment it with storm spell or Evocation. Both good choices. Evocation I usually default with on mass trash pulling, however storm spell is great for fights like Draco where you want to draw a bit more initial aggro on mobs.

When doing boss fights its now arcane mastery and eye of the storm.

I want to be clear. The best 4 set right now is High Vizor, and the best spec is THAUM….

So why are you using renegade tree and Shadow weaver? Because I run with CW’s most of the time that have High Vizor and the Assailing Force from the THAUM tree. Therfore I find it a lot more effective that I also add the Shadow Weaver bonus to the group, as well as maximize my damage to help clear the trash faster.

So now the million dollar question, what gear set/spec should you be?

If you are a more casual player and do not want to invest any USD$ into the game, then my recommendation is to go 4/4 High Vizor and the THAUM tree. Your benefit to the party will by far outweigh any personal dps you can bring to the table.

Vorpal vs. Plaguefire vs. Lightning

Much along the same line as above, if you cannot afford to get a Greater or Perfect vorpal, and at minimum rank 7’s in all your gear, then you will bring much more to the group running a Plaguefire. Every group needs at least one plague fire, and many of the times it’s the CW that has to bring it to the table. It is the cheaper and safe option for all CW’s.

As for lightning, I have done many combat comparisons between a Greater Lightning and Greater Vorpal. The Vorpal consistently outperforms lightning by a large margin because of shield crits. (Disclaimer: I have not compared perfects, however cannot imagine a scenario where lightning is going to be better). The only argument ever for lightning besides it being cheaper would be if you did not have good crit % chance. But any end game build you should be at the crit soft cap (be 35%+), and therefore to me it makes lightning irrelevant and not a wise option.

Who cares… simple answer. The cat if you’re using a blue belt gives you slightly better stats, but the difference is so marginal it has little impact. A cat can randomly dies, where a stone does not. I use a Cat personally, but in no way try and claim it is much better than the stone or Vice Versa.

How can I afford a Perfect Vorpal Enchantment?

Rough. CN speed runs allowed a lot of people to massively farm items and generate AD. Now that that has been closed off, at least on Mindflayer the price of draco gear has been tanking, and the price of vorpals/coalesce wards has stayed firm or even rose a little. If I am being honest, right now it would be next to impossible to farm out a perfect vorpal without an investment of USD$ into AD. Even then, with the price of Zen/AD they are almost forcing people to 3rd party sites, and even then the price of a Perfect Vorpal on Mindflayer would be around 20 million. That is a rough climb. I imagine as time progresses and there is less AD floating around because of reduced BOE prices, we should see the price of shards/wards begin to drop more. I have no idea if it’s the same situation on other servers.

Here is a brief explanation of the best way to tackle Draco fight in Castle Never.

-Yes, any group serious about CN bugs the adds. When there is a lot of mobs, one CW should shield toss, while the other repels. If there is few adds, both CW’s should repel.
-Can you solo CW it? Yes, it is easily solo CW’d if the DC acts like a shield tossing CW and does his knock over in combo with your repel. If you run with a consistent DC, have them practice tossing as well on regular runs.
-Can it be done without bugging the adds? Yes. You tab entangle and just continually shield toss. The biggest mistake you can make if your attempting this is to toss with only a few adds. You have to work well with a TR (smokebomb) and DC to manage the adds a bit more, but it is very do-able.
-“I am struggling with AP while using repel”. Just remember your best ap gain is with shield, when you pop singularity and prepare for the repel, you should of had your shield up. Slam them into the wall in the early stages of your singularity, before you repel.

Why take entangle? Entangling red wizards then following it up with steal time while your in a waiting pattern is a group life saver. The fight is all about the whites and red wizards. Manage them effectively and its gg.

Here is a screenshot of my feats: 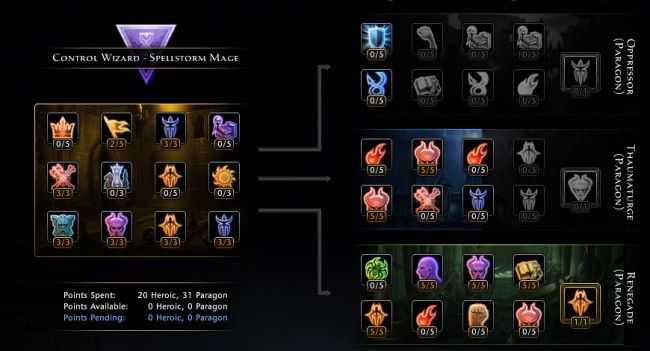 Here is a screenshot of my powers: 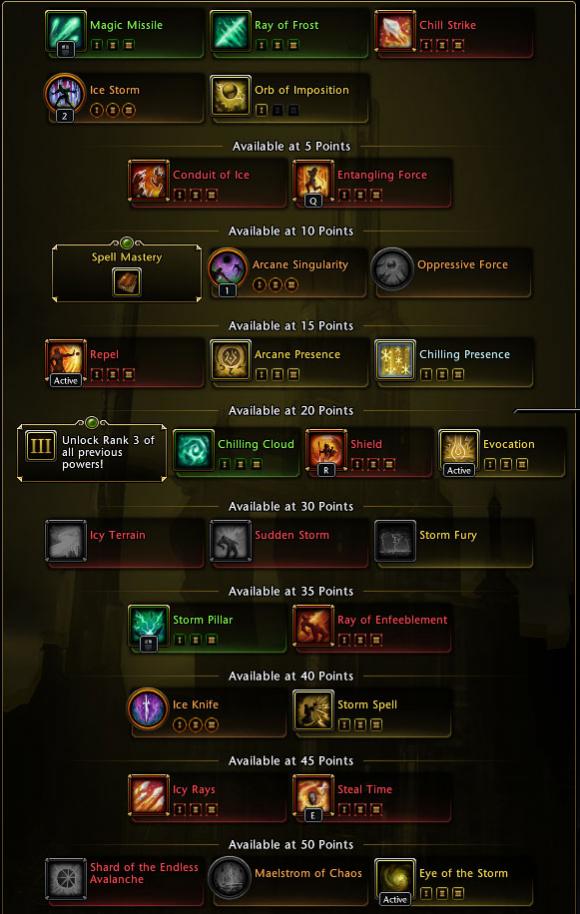 As of 7/18/2013 patch, it appears the following stealth patches have occurred:
-Storm Pillar now can crit on initial attack
-Nightmare Wizardry no longer procs on ourselves

As of 8/1/2013 patch, the frozen power transfer feat was patched. I have temporarily removed the section on single target damage as it no longer applies. I will update shortly with more single target information