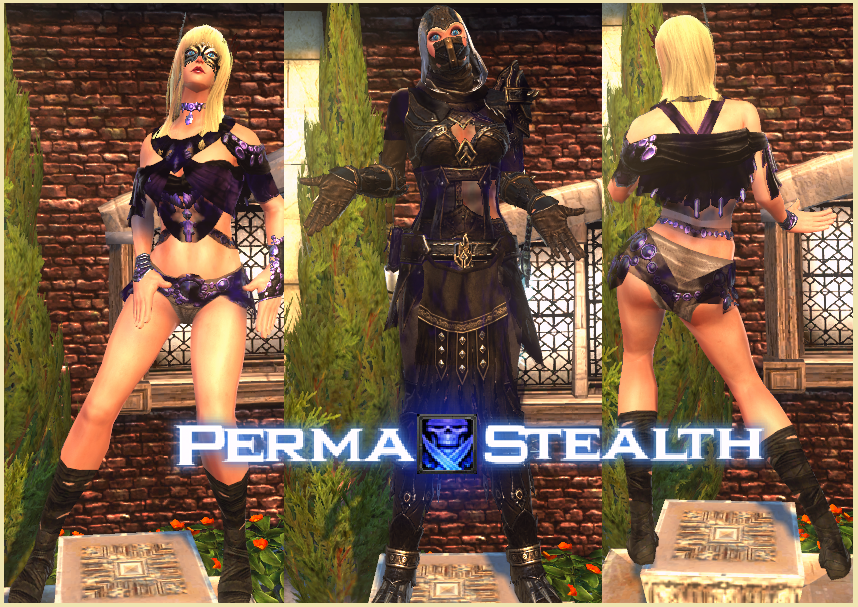 
This build is meant for PvP only, it focuses on Recovery Stats and Intelliegences; INT being your primary Ability Score for CD reduction. With this combination you will have a high amount of Cool Down reduction for your skills “Shadow Strike” and “Bait and Switch” which means you can refill your stealth bar more frequently, ending up with a Perma-Stealth.

*NEW*Perma-Stealth: The Movie
http://www.youtube.com/watch?v=jJE7FbIWmf0
(This is just a “Promo Teaser Video”)
Goals and What I hope for in this project
– It’s going to be a 1 hour & 30min “movie” of PvP with the Perma-Stealth Build
– Hope to mix it with tips and Tricks, being informative
– People are asking to show off it’s “holding capture point” capabilities against multiple enemies, so I’ll try to get some clips of that.
– I’ll try to make it entertaining and fun. New at this…
– If you have a request of what you want to see, let me know and I’ll try to add it


The build cost for Armor and Weapons is at a reasonable price. Armor is the Armor Set you purchase in Gauntlgrym so you don’t have to spend AD. Rings are about 20-60K each, Amulet was about 15K, and the Belt is a bit expensive which can cost about 300K. For the weapons you will want to use Thickgristle’s Jagged Dagger on your off-hand, the stat for Recovery on it is extremely nice. You’ll then want to use Battlefield Skulker’s Long Dagger for your main hand, this give you some nice Crit as well as some Health to increase Tenebrous Damage. 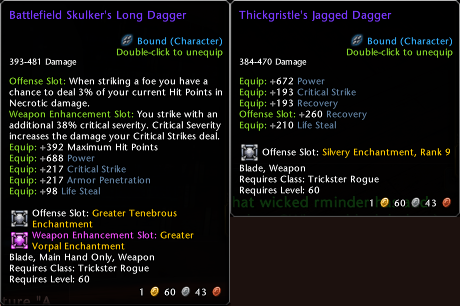 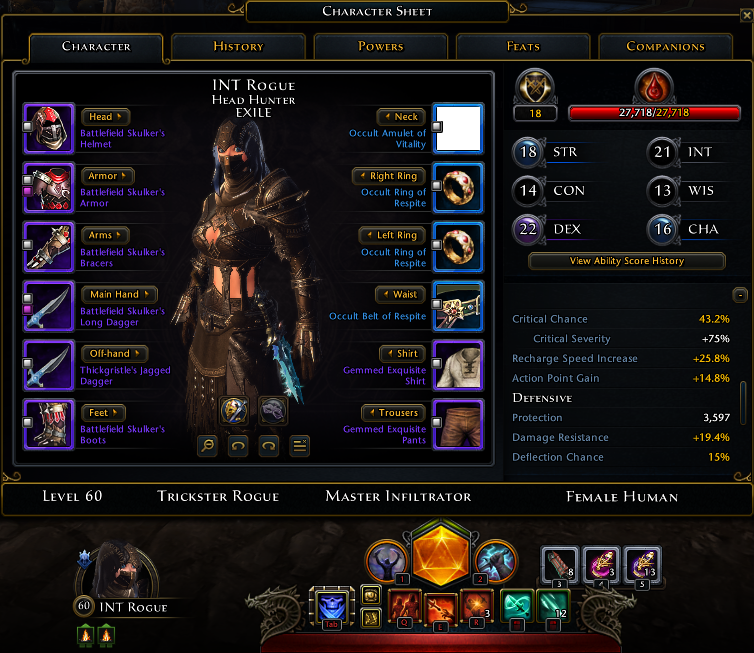 For your Head, Chest, Gloves, and Boots, you will want to use the Battlefield Skulker’s Set (Purchased with Gauntlgrym Coins). The main reason of using this set is for the 4th set bonus which will increase stealth duration by 25%. This is huge considering that you will want to stay in stealth at all times as it is your main form of defense. For your Neck, Ring, and Belt I recommend the items on the displayed picture below. 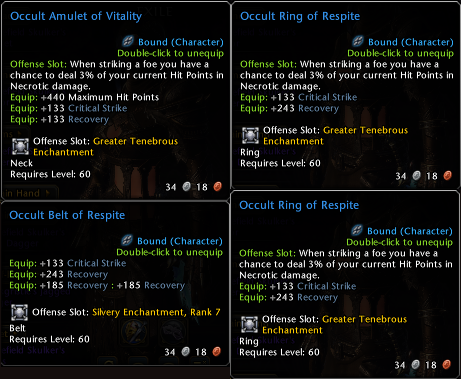 
I actually had to re-roll because my main rogue couldn’t get enough CD reduction (My Half-Orc had 8 INT base, which I pumped up to the max only gave me 14 INT, which is +4% CD reduction). However this build is still playable if your Rogue didn’t have a high INT base upon character creation. You WILL have a time in which you will be visible to the enemy and to myself that’s a big problem as you can get CC’d or Stun locked ending up with a death.

As a Human you get 3 extra Heroic Feats, these Feats are placed in Scoundrel Training which increases your At-Will damage by 9%.

Dexterity:
Each Ability Score above 10 provides the bonuses.

This will help out your DPS as you’ll see a lot more critical hit’s.

Intelligence:
Each Ability Score above 10 provides the bonuses.

Intelligence is very crucial to this build’s play style. You need a good and high amount of Recharge Speed in order to achieve “Permanent Stealth” (Perma-Stealth).

Alternate Power Setup:
Switch it out to be most effective when dealing with Clerics or Guardian Fighters

Switch Impact Shot for Path of the Blade, this pretty much eats away on Clerics and Guardian Fighters. Use it and go back into stealth, the Path of Blade effects will still be active and what’s better is that they can’t see where you are, but still keep a distance from Crit focused/Stun locking Guardian Fighters. If your up against a Cleric, I wouldn’t worry too much.

Switch Sly Flourish for Duelist’s Flurry, this will help your DPS immensely. However pay a lot of attention on your stealth as Duelist’s Flurry does take quite sometime to wind up. When fighting against a Guardian Fighter, you’ll need to prime it at a relative distance of the target, don’t just run up and spam Duelist’s Flurry in hope to get the 3rd chain off, that’s way to dangerous. Instead, keep a distance safe enough that they can’t see you and close enough to get the 3rd chain on time. You can attack, run up a little then attack again, this will ready your 3rd attack and you’ll need to use it asap before the attack restarts to it’s first attack.

Standard Dailies:
Lurker’s Assault – You will always on Lurker’s Assault on your skill bar, it’s viable in multiple situations… to hold an enemy capture point, to kill “squishy” targets (Control Wizard and Trickster Rogue). If your stealth is running low and your “Bait and Switch” and “Shadow Strike” is still on cool down and wont make it on time, you will want to use Lurker’s Assault.

Shocking Execution – This is a very nice finisher, able to hit for 18-30K. I recommend using this on “tanky” targets such as Clerics and Guardian Fighters. Keep in mind that using a daily will refill your stealth, so you can kill a target with 30K execution damage and remain in stealth.

Point Holding – Passive on Enemies captured area:
If your objective is to hold the enemies captured area as long as you can, I recommend switching Shocking Execution with Bloodbath. However you will be using Lurker’s Assault to maintain stealth if needed. Bloodbath is used as an “Oh Sh*t! button”, if your dealing with more then 3 enemies that are AoEing the area, you will get hit and eventually found, stunned, cc’d and killed. All you need to do is spam Bloodbath and hope that it actives in time; dashing around the area giving you time for CD’s to go off and additionally refilling your stealth.

Invisible Infiltrator, it’s a no brainer why you need this. After using a daily it refills your Stealth meter and grants a 5% damage bonus for 5 seconds.

*In competitive PvP, premade vs premade. Swap Skullful Infiltrator for Sneak Attack*
Sneak Attack increase your Run Speed by 30% while Stealthed. Since you will be in stealth 100% of the time, you’ll always get the bonus movement. This is huge because you need to able to avoid AoE and random attacks. Getting hit once will reduce your Stealth Meter and end up screwing your timing for CD’s. 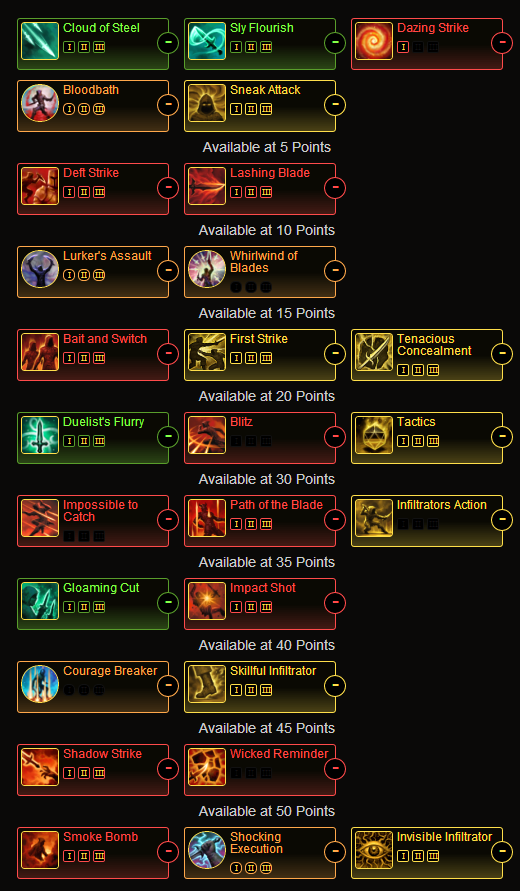 This is for leveling in PvP

At low levels, you’ll want to use:

Switch out First Strike for Tactics when you reach the level

(you’ll get a lot of action points from Bait and Switch combined with Tactics, meaning you’ll use your daily power for frequently)

You can switch out Sly Flourish for Duelist’s Flurry,
at lower levels other players don’t do as much damage to be considered much of a threat. If you do get focused on, you can use Bait and Switch to roll back, then dodge roll out to a safer distance.

Switch out Deft Strike for Shadow Strike when you reach the level
Now you can somewhat create the Perma-Stealth, for the rotation you will want to start off like this:

After that, your Bait and Switch wont make it on time to continue the rotation (at higher level with 30% recharge, you’ll start with Bait and Switch instead of Shadow Strike)

Switch out Bloodbath for Shocking Execution when you reach the level 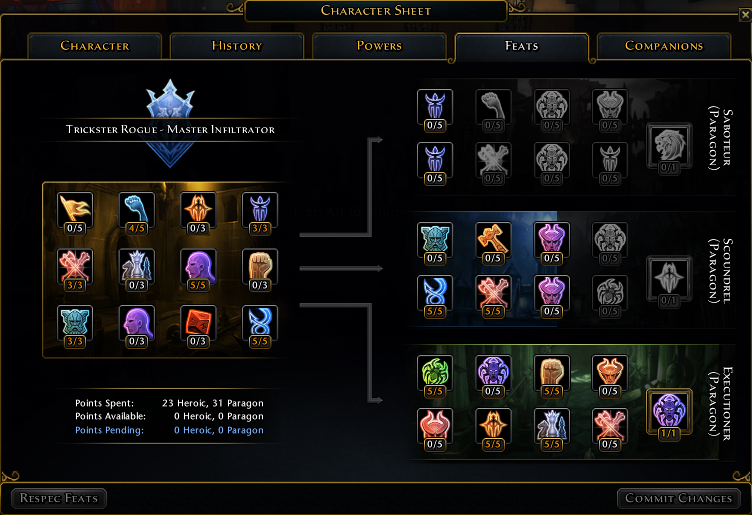 What your Feats provide for your Damage


Cancel Stealth
Some players will run at you and as soon as you go into stealth they will turn and run away, waiting until your stealth is done and they’ll run at you again. If this ever happens you can just double tap #6 to mount and dismount, cancelling stealth so it doesn’t consume all your Stealth Meter.

You can also Keybind different Field of Views to help you be more aware of the surroundings. Knowing if more enemies are coming or sneaking up behind etc. It also helps you can check corners to see enemies passing through. 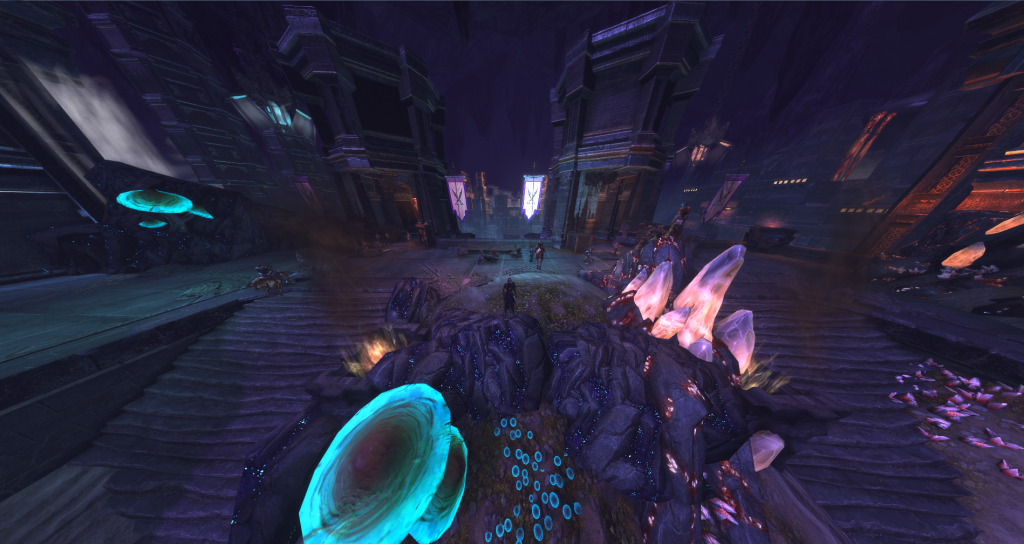 Use Impact Shot with Overrun Critical
Keep an eye on what buffs your rogue has on. If you want to see some high damage use one CoS to active Overrun Critical when you critical hit, then follow up with an Impact Shot. I only use this combination when you know you can finish off the target or when Lurker’s Assault is active to keep the rogue in stealth.

Here is an example: