This guide is the result of analyzing all of the popular CW builds, watching hours of gameplay of high-level play on streams, and getting advice from other players. This is probably similar to other Renegade builds, but I haven’t found one that is exactly the same. The small improvements make a world of difference.

FOREWARNING:The power calculator I used for this build is missing one point. Put the extra into making Eye of the Storm 3/3.

Little-Known Tip: Hold down your left click while doing encounters since when it’s done casting your Magic Missile will glitch and behave as if it had been casting the entire time, doing bonus damage.

Race: Either Tiefling or Human. As Human put your extra feats in Prestidigitation.

Abilities: For Humans get +2 in int and go full int/cha. As Tiefling get +2 int +2 cha and add ability points to int & cha.

Class Features: Storm Spell and Eye of the Storm 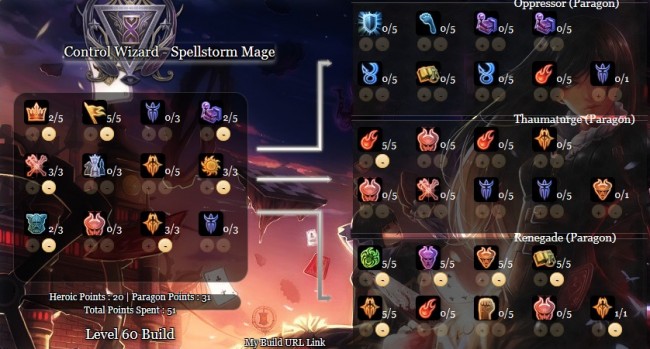 This build will function fine in PvE but is mostly for PvP. I haven’t actually played a CW ever before but instead was advised by a couple of knowledgeable CW friends. Based on that I theorycrafted a build which they all generally agreed was the best possible.

If you’d like to change your FOV use the following command: /gfxSetDefaultFOV XX where XX is your FOV. I suggest 70, the default seems to be around 55.

Hope this helps people out. Thanks for viewing. (PS: I accept any friend requests and I own a guild which is theorycrafting oriented on Beholder – Praelatus@ararararararagi)