First off I’d like to clarify that this was not originally my build as far as feats however, rotation and points into powers are. I can’t remember who’s feat build it was (and when I find out I will give due credit) but ever since I’ve seen my damage sky rocket and always first on dmg by around 1-4 million over other players (even over other TR’s) against equal geared characters. I hadn’t planned to write a guide so I don’t have all the screen shots needed at the moment, but if this post is useful to anyone, I’ll be sure to get some next time I’m able to log in the game, also my first time ever writing a guide however I was asked to do so by many TR I grouped with as well as the constant whispers I get in game about my build. If there is a similar post with a similar build, then I apologize in advance, however I haven’t seen any builds so far. So here goes…

My character’s name is Luna@batuba (currently at 9.9k Gear Score) and is a Drow Trickster Rogue. My ability scores are as followed (with out campfire buff) : 26 Dex, 19 STR, 17 CHA. 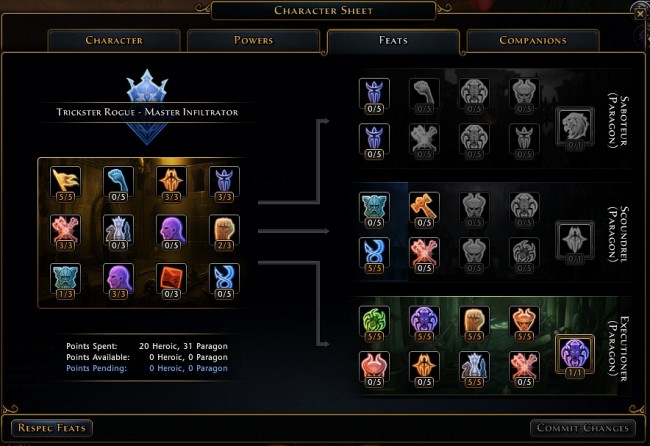 Action Advantage 2/4/6/8/10% additional Action Point for dealing Combat Advantage damage. 5/5
You should constantly be striving to be in combat advantage due to extra damage and feat bonuses. Getting extra action points is very nice as well.

Weapon Mastery 1/2/3% greater chance to land a critical hit. 3/3
This build is based on crit and crit damage. Every bit of crit will help.

Toughness Increase your Maximum Hit Points by 3/6/9%. 1/3
Little bit of extra HP never hurts and a good place as any to dump the extra point needed to advance in the tier.

Cunning Ambusher You deal 2/4/6% more damage for 6 seconds after leaving Stealth 3/3
You should constantly look to fight from stealth when your able. This will stack very nicely with other abilities later discussed.

Scoundrel Training Your At-Wills deal 3/6/9% more damage to foes not targeting you. 3/3
Clearly not a soloing ability however you in groups you’ll nearly always have this damage bonus.

Disciple of Strength Increase the amount of bonus damage Strength gives you by 5/10/15% 2/3
If your Race is Human, I strongly recommend finishing this up with 3/3. Again, more damage always better.

Dazzling Blades Your At-Will powers have a 3/6/9/12/15% chance to reduce the cooldown on recharging Encounter powers by 1 second. 5/5
Get your abilities off CD faster… Can’t go wrong

Cruelty’s Reward When you critically strike a foe you generate 2/4/6/8/10% less threat for 6 seconds. 5/5
Better than the alternatives at this point. Also less threat on you means you can take advantage of the 9% extra dmg from your target not focusing you from Scoundrel Training (see above).

Brutal Backstab While Stealthed you critical with 5/10/15/20/25% more severity. 5/5
Bread and butter of this build. This with Lurker’s assault and other feats discussed make this build brutal.

Critical Teamwork You and your nearby allies gain a 1/2/3/4/5% chance to crit. 5/5
More crit for you AND your party… YES PLEASE

Duelist’s Flurry has a 5/10/15/20/25% chance to apply ‘Deadly Momentum’ Deadly Momentum; Increases your critical severity by 5% per stack. 5/5
This is an amazing feat. You’ll nearly always have all 5 stacks of this with only one DF chain.

Overrun Critical When you land a critical hit, one of your next attacks strikes with 30% of your crit severity.
Amazing ability that allows you to get off some consecutive big crits.

Underhanded Tactics Increase the effectiveness of Combat Advantage for you by 4/8/12/16/20%
As stated before, to maximize your damage, you always want to be in Combat Advantage as much as possible and this will increase the benefits by 20%… again, YES PLEASE!

POWERS I USE CONSTANTLY SITUATIONAL POWERS I NEVER TOUCH

There are powers I don’t mention here, and I didn’t do so because I didn’t bother placing points into them at all. 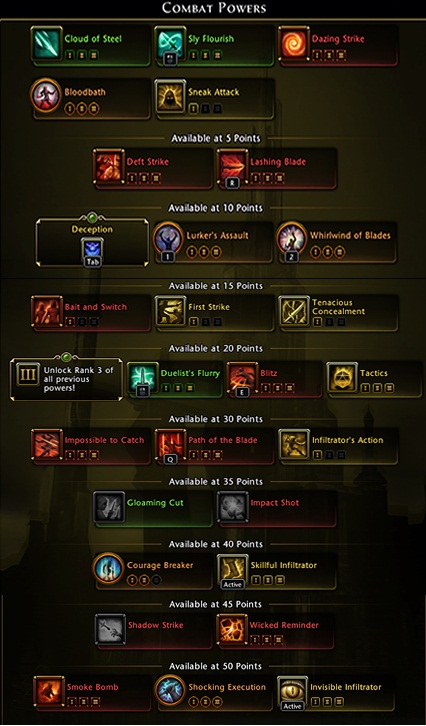 Cloud of Steel 3/3
I use this primarily for PvP. No real reason to use this in PvE.

Sly Flourish 3/3
My left mouse button. Great for when you don’t have time to do a full Duelist Flurry combo. Also during stealth or combat advantage, this can build up some serious damage quickly.

Duelist’s Flurry 3/3
Right mouse button. This is the main ability of this build. With the feats selected, you’ll be adding 25% crit severity as well as a bleed effect that stacks up to 10 times. (I’ve personally had up to 14k + ticks however average around 4-7k). Keep in mind that this ability has its down sides as well. First two parts of the chain are very slow animations and in that time your target might move away and you’ll have to start the chain again. Another is that if your target is knocked off the edge during the 3rd part of the chain, you may fly off the edge as well (or during CW’s daily to suck all the mobs to one point, its possible to get stuck in the roof if the ceiling is low enough and you have to do the /killme and waste 20 silver on a repair kit). On a positive note, during the 3rd part of the chain, CC/knockdowns don’t affect you.

Dazing Strike 3/3
This ability is nearly always on my bar. Dazes target and is part of my combo rotation that I will explain further on.

Deft Strike 3/3
You could use this for PvP (however I don’t). My main use for this actually is for when I get stuck in walls or weird places due to Duelist Flurry and mobs getting knocked around by other players. Im forced to place this on my bar and teleport to an ally or enemy in hopes that I don’t have to do /killme (/stuck hardly ever works)

Lashing Blade 3/3
Amazing ability that dishes out ton’s of damage. IMO all rogues and builds should have this.

Blitz 3/3
My GO TO AoE ability. Does considerable burst damage for an AoE (limited amount of targets, I think its around 5-6) and the best one rogues have.

Path of the Blade 3/3
Very low damage AoE however I keep it around in case we need the extra AoE to take care of mass monster adds.

Courage Breaker 2/3
I’ve never used it… I keep it around in case one day there is a dungeon boss that hits like a truck (maybe a raid *crosses fingers*) and you could help mitigate the damage done.

Wicked Reminder 3/3
If you know your going to be full time on a boss and will have 0 AoE during the process, this is a nice ability to place on your bar. Low CD makes generating Action Points faster and you help the group with a damage resistance debuff.

Smoke Bomb 3/3
I used this purely for PvP however I’ve found uses in PvE when I know all the monsters will be in a certain spot, pop that down to give some breathing room to your cleric and who ever has the aggro (normally the cleric too :P)

Impossible to Catch 3/3
PvP skill mainly. If your against a lot of CC, this could be a nice ability to get around it.

Lurker’s Assault 3/3
Your main daily and the whole purpose to this build. Lurker’s assault allows you to get permanent stealth during its effect and increases your damage by 60%. Stack this damage buff with your other feats to do extra damage in stealth, leaving stealth and so on, you’ll notice monstrous damage. I’ve taking off 40% off certain bosses health during one use of this daily in T2 instances. Can’t stress how good this daily is.

Whirlwind of Blades 3/3
I have this on my bar however I’m not sure really how good this is. It hits a limited amount of targets and increases power… Its “okay” for using if you want to do a bit more AoE and only reason I keep it on my bar.

Bloodbath 3/3
Decent for PvP since you become immune to damage during its use. I never use it however.

Shocking Execution 3/3
Good “Execution” ability for finishing people off in PvP. Not worth it in PvE in my experience.

Tactics 3/3
I’m still up in the air about this one (in between this and Skillful Infiltrator). 15% more action point gain is always nice and since Lurker’s assault is the basis of this build, getting to use it more often is always good.

Infiltrators’ Action 1/3
Never use it… need to place points some where right?

Invisible Infiltrator 3/3
A must have with this build. 15% more damage with your already 60% damage from Lurker’s assault as well as assuring you’ll have stealth active when you pop your daily.

Sneak Attack 1/3
I think we can all agree that this will never be on anyone’s bar at 60. Should be renamed to Quick Sneak… flying mongoose or donkey balls.

HOW THIS BUILD WORKS

Okay the goal to this build is to have as much crit and power as you can. On my rogue I have around 50% crit on my character tab (not sure if this includes feats or not) and 4500 or so Power.
When I get to a fight, first thing I always do is position my self to gain combat advantage to gain full benefits of your CA (combat advantage) feats or directly go into stealth.

ROTATIONS
Yes even this game has them! Or at least I like to think so.

If you do this properly, you’ll just be in time to get Lashing strike during stealth right before it ends not only getting 100% crit but also insures (due to feats) increased Dazing Strike’s damage.

I normally go with the second option so I can remain in stealth longer before I break it. Just to give you an idea of the kind of numbers I’ve seen while doing this rotation in Lurker’s Assault : around 50-65k Duelist flurry (per chain) – up to 14k Bleed ticks – followed by a 30-56k Lashing Strike – 34k Dazing Strike crit – 11k crits on each monster hit with Blitz. All this in the short time that is Lurker’s Assault. I don’t have a vorpal enchant for my weapon yet, but expect to see higher numbers than that if you do get that.

I hope this guide is able to serve at least one person. I’ve received a lot of whispers in game for my build and I feel that this might prove more useful than my cut up whispers due to me being in the middle of a dungeon. If you ever need additional advice please feel free to look me up, but before doing so read the guide well enough and see if you can find your answers here. I’ll post some screen shots soon of damage parses. I’d like to take this opportunity also to let people know that don’t judge your class before reaching T2. Most classes begin to shine here. I’ve seen GWF out dps rogues, Control wizards are key to successful groups as well as dishing out some mad damage as well. Know how to play your class and give them all a good run through in T2 before making judgements.