Greetings everyone, I hope your day is rocking well thus far!

I’ve decided to share my current Sentinel build of my GWF – LEEROY JENKINS, along with my general opinion of the class and how it plays. Now this build is simply how I do things, it fits my play style, and I greatly enjoy it. That doesn’t mean it’s perfect, nor necessarily right, for you, but it is hella fun!

So, let’s begin with my general premise, then the powers/feats and so on…

So my general premise for GWF was to go with the Sentinel Build. I’ve been running this since before the June mega patch, but I have changed it up a bit w/respec’s since then. So it is ever evolving. I wanted to play a toon that brought good things to a party, could stand laughing in the face of a Red Dragon’s Breathe, and still be viable in PvP (as I find it fine to play a few matches a day). Thus this silly build began…

I’m going to list the Powers that I have maxed out that are always in rotation on my character, as that leaves room for people to work around as they see fit.

Note: I have put a * next to the powers I use as my standard setup in PvE. 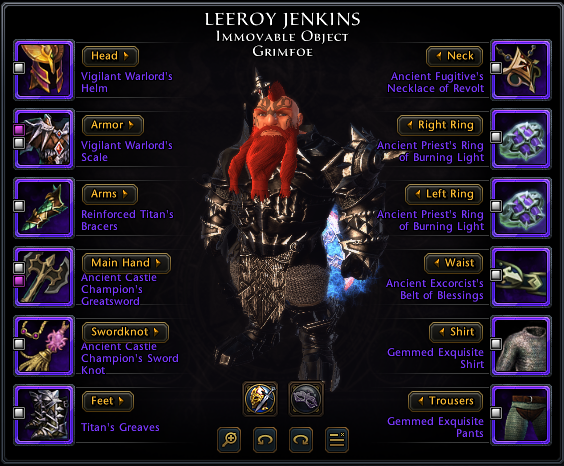 Now some insight to the stats, with varying enchantments that I use. Keep in mind I do use an Ioun Stone of Allure, which obviously affects my PvE stats. What follows isn’t all, but it gives more insight into the build and where I went with it…

For Armor Enchantment I use Greater Briartwine. I know everyone loves Soulforge, but with the survivability this build brings I almost always (like has only happened a few times) have time to pop a Potion/Health Stone when I need to in PvE. Thus a few months ago I was looking around, and figured with my goal of getting oodles of lifesteal and desire to generate aggro whenever I can, that Greater Briartwine’s 3.2% damage return to any attack on you would be cool. I’ve enjoyed it ever since! Yes, yes… I know it’s not “optimal”, but it’s my choice and I’ve liked it.

The build will not lead the DPS charts in a dungeon, and will usually get 2nd (mostly) with sometimes a 3rd place depending on party composition. Then again it’s not designed to lead in DPS. The build is designed for survivability, while not being completely pillowfisted. You are also a great insurance policy if someone makes a mistake like if your DC messes up Astral Shield, the TR doesn’t joust the boss and dies, or the CW doesn’t Arcane Singularity correctly. Your ability to run in giant circles (no effing joke!) fast enough to stay alive and long enough for your party (who died) to make it back from the campfire (on the bosses this matters on) is invaluable. You can also Sprint to rez anyone, even within red circles, and make it back w/o detriment to the team.

So there it is in a nutshell… Hope you enjoyed reading, and I look forward to quality discussion as it’s never a bad thing for a build to evolve with intelligent discourse!

Here is a bit of insight into my race selection and starting stats as some have requested.

I chose Dwarf for a number of reasons…

1. They had the stat bonus increase I wanted for my characer: +2 STR and +2 CON

2. As a Great Weapon Fighter I knew I’d be in the mix of things right from the get go, and wanted to stay there so the Stand Your Ground (You have increased resistance to Knock and Repel effects: 20% Increase) seemed like a great ability to keep me next to the baddies I wanted to smash. However there may be a bug with this in that it only works in PvP and not in PvE. If so, I’d love to see this fixed! They also have Cast Iron Stomach which is less damage to DoT effects, so less damage is never a bad thing(!), though this may also be bugged…

3. Aesthetically I just like the Dwarf race with Epic Dwarf Beards being paramount.

My Base Stats (Bonus in Parentheses) were as follows:

The reason I went with STR and CON bonus is specifically because I wanted to not be pillow fisted, and wanted to take hits well (along with have high ArmPen). DEX could be higher of course, if you want more Crit % and that is your decision to make.

I chose 11/9/11 for the ‘Off Stats’ because I figured I would want them all in the positives at the end of my run of stat increases and with Camp Fire Bonus it would be 14/12/14 end line, which I liked.

Not saying these are optimal, but I’ve enjoyed it thus far so take it as you well!