New To Archers and They have quite a variety of skills, I used skill calculator and maxed their skills 1 by 1 to see what I can mix and match for the average Lv.40 player (Most of my guides are revolved around Lv.40 ) specifically since I consider Lv.40 to be the beginning of most decent skills, if you’re under it, feel free to work it my way till ya reach 40. Now This Following Guide Is Based And Made to be a Balanced Yet competitive PvP (Single Arena and BG) Guide, And Also Works Wonders In Cata Making it quite easy, so here it goes:

Acumen: Lv.2 Receive Extra 5 Rage for “EACH” Critical Attack (It’s “Meh” But Mainly Gotten For The Next Skill)

BloodThirsty Strike: Lv.2 Deals 120% damage to a single front row enemy and converts 60% of damage into hp/QTE: HP Regen +10% (One of your best friends and Lv.3 is nice so Max It)

Multi Shot: Lv.1 (In My Opinion Multi Shot Is Overrated and skill points can be better allocated elsewhere, and As you grow in levels you will see even at higher levels it usually loses it’s value, Unless you’re a Casher…)


Delphic Sniper: Lv.1 (Same reason we leveled Multi just to one, for the next upcoming skill)

Lunatic Fire: Lv.2 Deals 96% damage to ALL enemies, Crit Rate increased by 10/QTE: Bonus damage of 25% (This Skill Works Wonders In 3v3 Arena and just about every scenario, Rage Cost is 45 which isn’t bad and can be popped pretty early in 3v3 if you have arena set, can often help win matches in 1v1 too)

Poison Arrow: Lv.2 Deals 52% damage to a random single enemy and reduces their hp by 52% of physical damage, Lasts 3 turns./QTE: +1 duration (One of the main row skills, this skill is AWESOME considering I Under stand it right, can EASILY help win the match in your favor against Other Archers/Knights Max It)

Deep Freeze: Lv.3 175%+260 Physical damage to a Single “Rear Enemy” AND reduces Casting speed by 100%. Lasts 2 Turns/QTE Duration +1 (This…Skill…I Hate It! cuz i’ma mage -.- but reducing cast speed is basically reducing skill speed, works on anything, and this will HELP kill and PASS Lv.50+ Cata Bosses, it’s OP/Makes Them Lose a Turn or 2/Low Rage Cost for it’s damage and effects Max It)

And This is where I stop -.- that’s 19 skill points (1 left over, save it), if you get more focus on the main ones, poison/deep/bloodthrist/if any leftover try and max lunatic

Troops: I said it before..F**k Knights..even most archers in [S5] are going Angels, Just Up Their Troop Count/HP/Pdef/Mdef (They help in Cata/BG and 1v1) this build isn’t WB no use for Knights

Academy: All Hero Stats Besides Matk -.-

Astrals/Gems: Focus On The Basic Stats, Patk/Pdef/Mdef Last is w/e you want, doesn’t really matter, but if I had to pick…probably crit, stick to basic foundations that make the character what it’s good at if ya dunno

Reason For Choice of Skills: It Just Seems to “FIT” to me…Lunatic/BloodThirsty/Poison/Deep Freeze for 3v3/Cata/1v1/BG/Campaign. 4 skills out of a 5 hotkey bar, the 1st one on your keybar should be your basic Rage gain skill, yes I know we have Multi/Delphic and it proably feels like a waste, but believe this is a decent guide and Lunatic really DOES Help, don’t bother with other skills as you level and focus on these main 5 skills and you should be fine in just about any situation

P.S. THIS IS NOT A WORLD BOSS BUILD!..buuuut~ might wanna switch out a skill for delphic during world boss to see how it works ._.

P.P.S. To Actual Pro Archers…What Do You Think of This Current Setup? Bad? Noobish?..Need Feedback be it positive or negative…if ya troll out of spite I will troll back -.- 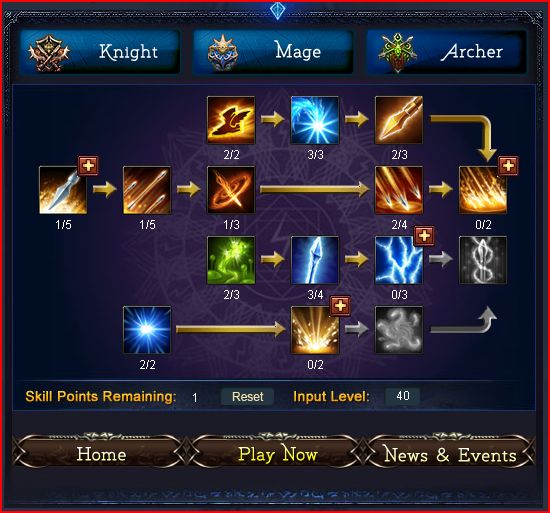