Best World Boss Build (If you have double skill tree it works well as a secondary Option, or even as a Main if you don’t mind the lack of heals) so let’s get started:

Mana Master: Lv.3 Magic Attack Boost of 15% (You need All the Matk you can Get During WB)

Delphic Thunder Frenzy: Lv.2 (You’ll Never Use It Except Maybe for a Campaign,Multi or BG, just leads to our “Main” Skill)

Castinator: Lv.2 8% chance to reduce rage consumption of next skill by 20 points. (for 8% it procs pretty oftenly and will help save mana everytime you cast Thundereror other rage consuming skills)

Breakdown: Bolt= Main Rage Builder, Build enough to cast Thunderer, if you have lv.40 rings they will be helpful as when they proc they will reduce the rage cost by 40% of total value (that’s almost half) which is a lot on Thunderer, If Castinator procs that works wonderfully as well saving you tons of Rage while spamming these skills, pretty simple, aside from that you just double hit whenever possible, double hitting can be done with ANY skill, when damage appears overhead you or your troops and “JUST AS IT STARTS TO FADE” hit the desired Skill 100% certainty and self-tested unless ya lag TERRIBLY!

Troops: I Use Angels Since I’m not a WB Build, But Troops Preferred for WB Builds would be Knights. As Much A I Despise Them they are the preferred choice simply for their “damage”

Astrals: For a Mage ANYTHING that can possible increase overall damage while Maintaining survivability: Matk/Disable Crit/”X” % Damage Reduction/Evade/Dodge Dmg Astral/Crit Astral/Hp/Mdef/Pdef <– Any Mix Will Do all depends on you, I’d reccomend Matk/Disable/”X” % damage Reduc (it’s a 100% sure, better then relying on % chance to dodge an entire hit)/and last doesn’t rlly matter 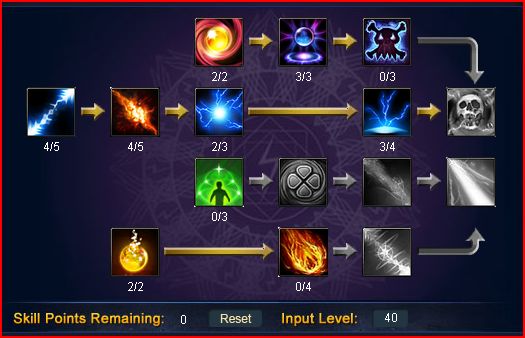 P.S. If You Have Not Noticed By Now, Most Of My Guides Revolve Around Lv.40