Hey everyone, this is a little guide to some tactics that can and will help you defeat most defences and even units an age above your own… with a little help of terrain and the AI’s stupidity of course lol.

p.s. because I’ve nearly finished the map and can’t proceed any further at this time, I can’t exactly choose my fights, so I’m going to have to make do with images of my neighborhood’s defences.

You could just hover over the units with your mouses/cursor to view the units details, it tells you basically everything about the unit including it’s bonuses.
… P.S. Mounted Archers are classed as Archers not Cavalry.

There is also terrain weakness for H Infantry if they stand in forests/bushes or upon rocks they are vulnerable to attack (take more damage).

So there’s a few tactics, the first one is the most popular one used by Trebuchet or Catapult users with 1 Cavalry unit (normally of the next age up to allow the points to go to the higher PvP tower), it works best when there’s fewer Siege and Cavalry, but still works well although you may suffer a few injuries… So for instance, I’ll use 7 Trebuchets and 1 Cavalry, but you can use other units with a mediocre-large movement, first thing you’ll want to do is to move your Cavalry unit to either the north or south part of the map, hover over the enemies army to ensure you’re out of reach of the enemies units (also don’t forget the ranged aspect, i made a mistake and a crossbow managed to reach my poor little horse). 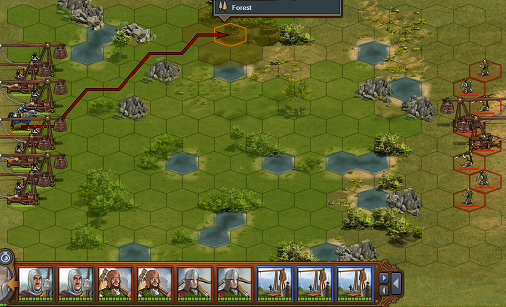 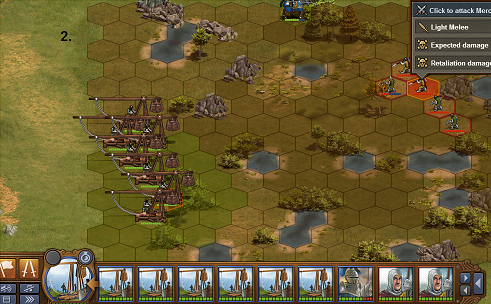 Also make sure you attack other Siege and Cavalry units first then S Range, L Infantry then H Infantry, so that you minimize the risk of getting attacked (you’ll get more battle points for not getting attacked or losing any health),and try to continue to lure the other units away from your Trebuchets. 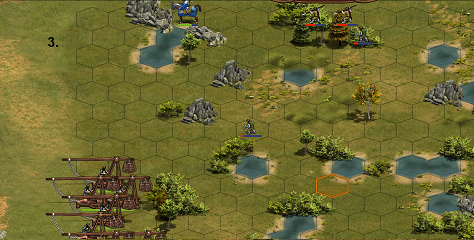 Next task is to just keep flogging those stones until they’re brown bread (dead lol).

As you can see you’ll almost always move first (unless your fighting field cannons with Trebuchets/Catapults) so assuming you move first, enemy second etc… hover over their unit that attacks second (to clarify you 1st, enemy 2nd, you 3rd, enemy 4th) hover over the 4th moving enemy Siege unit, to find out where that unit is on the map, it’ll have a yellow ring around the space it’s occupying.. and attack that with your first 2 siege units, as you’ll notice you’ve taken one siege unit down whilst only taking one hit… then you’ll want to repeat until you’ve defeated your enemy.

Sometimes you may come across a dilemma where your Siege units cannot hit the enemy siege unit, if that occurs just attack the next in line, even with that you could take down all 8 of your opponent’s Siege units and only lose 3-4 siege units of your own.

The next tactic i like to use is for the map fights, mainly because you’ll know what units your fighting, i wouldn’t use this against armies with siege units within its ranks; this is also what got me through the LMA/Colonial age map fights.

As i stated before i cant fight on the map so the images will be of neighborhood fights and mostly lower age opponents.. but the same rules apply. so for instance let’s say you come across an army consisting of 3 Cavalry, 3 Light Infantry and 2 Heavy Infantry, ideally you would want to use units they are vulnerable to, for instance, 3 L Infantry, 3 Heavy Infantry and 2 Short Ranged units, to counter their units.
If your fighting units of the same age, as your own, or weaker units then you could very well just go at it like dogs (not in that way you naughty people).. but if your fighting units an age higher than your own units will need to use tactics and/or terrain… i use the ‘shield’ simply because their Cavalry are the fastest unit and will attack first (most of the time), so the first thing you’re going to want to do is to move all your units to a corner of the map, to allow their Cavalry to separate as much as possible from their army… then set up your L Infantry up to defend your other units..

I know there was only one Cavalry but if there was 3-4 you would’ve still won that little battle, you could have even moved your L Infantry to the bushes/forests if your facing higher aged units, then moved them back… once the first wave has been dealt with you’ll then want to deal with their L Infantry so either let them join in or use your Heavy Infantry to deal with them..

Obviously i didn’t know what army i was up against but you will on the map fights, so you’ll know what units you’ll need,then just mop up their H Infantry with your Short Ranged units to win.

Also if you enter into a battle with say L Infantry a few S Range units, and you come across 8 Cavalry, and (like me) don’t want to surrender you could try to use the ‘Shield’ tactic so that your L Infantry (or H Infantry) protects your more vulnerable units… you can even try to use built up parts of the map to your advantage, by strategically placing your L Infantry/H Infantry between ponds or terrain that lowers the movements of all units, to force them to either stop before reaching your units or to attack your L Infantry…(big thanks to Surge for reminding me of this one)

And remember try to use the terrain to your advantage such as bushes/forests, rocks and hills, in the Colonial Map fights terrain can have a bigger impact than the actual units themselves.

If you use Long Ranged units and your facing a few melee troops move your units so that ponds,swamps, rocks, hill and bushes/forests are between you and the enemies army, to force them to slow down or to go around which gives you a little more time before they reach you.

Here are a few more tactics for people who have Rangers or Grenadiers and are having trouble with Trebuchets and/or Field Guns… if you have people using Trebs in your neighborhood use 7 Trebs or Cats and 1 Grenadier and the Trebs will always go for the Grenadier before your siege units as long as its in range and the Grenadier should last 2 turns but you should have killed 3 Trebs by then and then the next turn you’ll be laughing… and if you have Rangers and are having trouble with Field Guns get your Rangers into forests (where they become invincible to ranged attacks) so for the Field Guns to attack you they have to come close and attack at melee distance which means you can kill them in one hit, it also works with anything that uses ranged attacks.

I think i have covered the main tactics needed to win most fights, attacking wise anyway, i have managed to get all the way to the south-east part of the map with these tactics, so i hope that this little guide has helped a few people who are having difficulties on the map, or attacking players who have more advanced units.

If anyone has spotted anything i have missed or got wrong let me know and ill add/edit whatever it needs, this is my first ever guide to anything so i didn’t know how to write it in a sense so i just wrote it as best as i could sorry if it’s a bit messy but its pretty simple. Have fun Forgers