In a far future, when all demon cities will become ruins, players will be able to search them in hope to find a Hidden Passage Map. 3 players from Salbia successfully managed to enter the time portal and fight against the demons in the underground Demon’s Lurk dungeon.

Players can dispatch heroes to search Demon Ruins. When players search “Demon Ruins”, a few of the below will occur:
1. Entering battle against remnant Demon forces. When victory is achieved, obtained battle rewards (similar to current version’s attacking Demon city, added participation item drops of instance “Tunnel Map”).
2. Obtain treasure left behind by Demons. No combat is required to obtain Blessed Gems, Soul Gems, Tunnel Maps and other items.
3. Snared by Demon trap, deducting a portion of hero’s current HP (10%, 20%, 30%, 50%).
Small Tip: Success rate when players are searching “Demon Ruins” are affected by distance. The further the distance when searching “Demon Ruins”, the lesser the chances of heroes encountering traps.
Added instance “Demon Ambush”
Instance “Demon Ambush” is divided into 3-man and 6-man modes. Every mode difficulty is divided into easy, medium and hard for players to choose from. The harder the instance, the more chances for players to obtain high level game items.


Start Point
Deployment point. Once all participating instance members are ready, they can choose the same adjacent “Stage” from the start point to launch an attack. 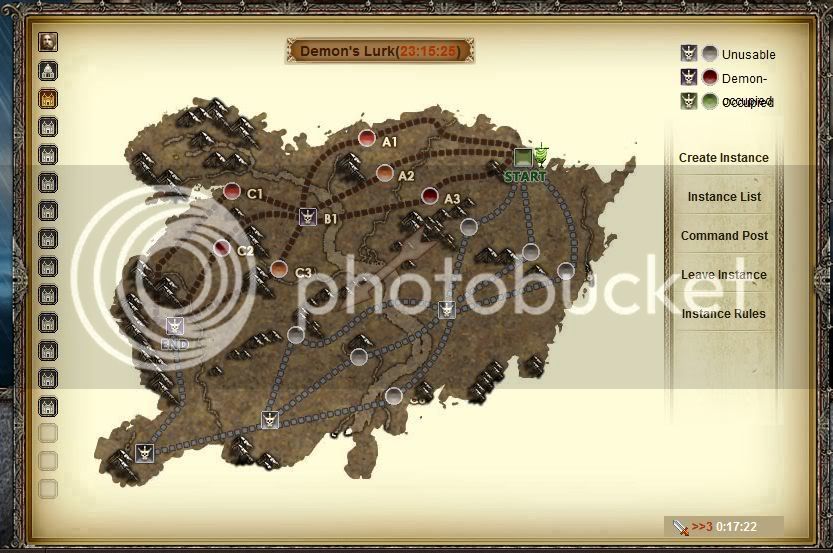 Stage
Every stage has a certain number of defending Demons. Player heroes must defeat all defending Demons to pass the stage. The time needed for your hero to reach to a stage and fight is 1 hour. After all the players have defeted the demons from their stage. they will be able to be dispatched further in the instance..

Defense Point
Massive Demon numbers will attack players at the defense point. Player heroes must defend the point at all costs. Only when the defense is successful can raid members attack the next instance stage. To get to the defence point, the player need one hour, after all players arrived to the defence point, the demons will need 1 hour to attack. After the attack, players can move to the next stage, if they survived.

End Point
Position of instance boss. When all participating instance members reach the end point, the boss fight will be triggered. Victory results in instance completion, along with great rewards.

Replenishment Explanation
Demon strength in every stage varies. Players can assign raid members to advance along the way according to player strengths.

Instance Battle Rules
1.Players can only dispatch heroes to attack points with linked routes.
2.Player heroes can only advance towards the end point, not retreat.
3.When attacking a stage, every stage must have an attacking hero, and there may not be multiple heroes attacking the same stage.
4.If a hero battle fails or ties in the raid, the entire instance fails.
5.After the instance battle starts (from the time the instance creator clicks start), any member who does not complete the instance within 24:00:00 hours causes the entire raid instance to fail.
6.When defending defense points, all heroes must defend at the same time. If there aren’t enough heroes during defending, Demon Counterattack battle is not triggered. Time interval for Demon Counterattacks is 01:00:00.
7.The marching time between any adjacent point is 01:00:00.
8.Player heroes can use HP potions, attribute scrolls and other items in the instance.
9.9. Heroes expend “Double EXP points” normally during battle!
10.Normal death rules apply for player heroes in the instance.
11.Players can click “Leave Instance” in the instance main interface to quit instance battle. Once any member leaves the instance, the entire raid instance fails.
12.A “Tunnel Map” item is consumed when participating in instance battle. The “Tunnel Map” can be deposited in the instance hero’s bags. The system will consume the item once raid members are ready and start the instance battle.

1.Player heroes gain EXP normally during instance battles.
2.During instance battles, player heroes have a chance to obtain Temperite and other high level items. The higher the instance difficulty, the more chances of such items dropping.
3.Once the instance is completed, all raid members have a chance to obtain Attribute Tomes and Books of Domination. The more members in the instance, the higher the difficulty, the more chances of obtaining these items.