Ok I’m not nearly as good at this as many others, but it needs to be done. If I missed anything, please fill free and post your ideas, comments, etc. I’ll add it in and edit as necessary.

Now I’m assuming most already have an understanding of basic building skills from above yards. If not there are several well designed guides in the player guides section to help. But givin you have to progress to over world before you can start Inferno; I figured I could count on some basic knowledge.

This is not a set in stone “do this or else” kind of thing… I don’t work that way. What I like the most about this game is the originality of everyone’s yards. I will include a few picture designs of a few yards I like. You want to include your yard post a pic I’ll add it in if it’s any good, or has a design point you would like to add.

Anyone feel like I missed something, or have anything to add please feel free to post. I’m honestly hoping for some help here. I’ll keep this thread up to date, with some of the tests I like to do and anyone that wants to help does as well.

Inferno has some differences when it comes to yard design:
The compound while acting as housing for your monsters also acts as a bunker. Any stored monsters will defend your yard. That makes this building one of the most important.

Incubators will refill your compound during attacks as well as in-between attacks. So without these your compound will stop working. That makes them pretty important as well.

There is no catapult, Zafreeti’s, or champs to worry about. (For now)
Above ground ranged attackers are all anything monsters. Below the Sabnox is a ranged tower monster.

Compound should be centered (or share the center with the UH) UH and RP’s, at a minimum should also be in the middle or close there in. I included the INC’s in the center as well in my yard.

Pathing is important.
Because of the Malphus, SDT’s are kind of a waste of mines and blocks. You can force Malphus to path, but it is very hard. Mazing if done right works ok. There are several ideas floating around about how to defend from malphus with mine placement, but so far most are a waste of mines, and not effective, so as of now I’m not including them in this guide.

Because of the Sabnox you have to think about how he will path and use walls and blocks accordingly. If you can avoid it you don’t want your towers open to line of sight from outside the yard. Building don’t block line of sight. If a tower is completely walled in, Sabnox will shoot though the wall and smash the tower. But if there is an opening around the side, he will path just like any other tower monster.

Monsters follow the same rules underground as above when it comes to how many blocks they will path around before eating a hole through your wall. There are some good guides on pathing; pokeyslayer has a really good one.

You will want a few valgo’s baits to protect your pathing, how many you need will depend on your design; if you have long armed micro chipping you may not need as many as someone that has a long wall along the side of you yard, etc. Just make sure your valgo bait is somewhere where it will be covered by more than 1 tower. Don’t think like eyera baits; Valgo’s don’t die when they attack, and they don’t do splash damage. So put them where they will be covered by high CF if possible.

Mines are better used in pathing.
Without the champions and Zafreeti to worry about, it is better to use more of your mines to protect your towers.

Towers.
CF is very important at this point, but you do want to make sure everything is covered.

How you place your towers is up to you. To start out place your SST evenly around the core of your yard, and then go from there.

QT can be used to protect your UH/RP/INC, or towers or all of the above. I have mine protecting my towers on one side and my RP’s/UH/INC on the other. Some people have been grouping there quake in 2’s which makes them very hard hitting, and hard to kill, but are giving up having the protection spread out more.

Magma’s hit hard when leveled up. They have farther range then the blasts.

You want to put your RG’s in a circle around your yard, within reach of your towers. This is a NECorg (Never ending chain of resource gatherers) some people are mining there’s; I personally don’t think this is a good Idea. Lol if they are attacking my RG’s my towers and compound is going to kill them why waste mines.

Your compound and incubators are very important to your defensive strategy. What monsters you use is up to you, there has been some discussion as to which is the best. The main thing to remember is as your monsters die they will be replaced with monsters queued up in the Incubators. So do you want follow up monsters that take 40 minutes to build?

Valgos-(Housing 30 spaces) burrows (which makes them good against sabnox) and have good health and ok damage. good for tanking as well

King Womzers-(Housing 100 Spaces) burrows and does splash damage as he surfaces. High health and damage, good for tanking and attacking. Can kill spurtz and low lvl sabnox with splash alone (lvl1 does 1200 splash. I don’t know if that increases with level or not)

Now one thing to take into account: As the incubators build monsters to refill your compound they are using your magma!

Before you leave your yard, you will want to fill your compound with the monsters you want to defend with. I’m going to use my compound for an example.

I keep 10 Balthazars, 6 Sabnox’s, and 17 zagnoids. I then have 1 Balthazar in each Incubator queued up in the “waiting “position. I then queue 60 Zagnoids in each INC leaving the last queue slot open till this is done. I then fill the remaining space with King wormzers till my magma total is very low; to save any magma from looters.

Below are a few yards incorporating These idea’s.

More will be added as permissions are granted / yards are submitted.

Thanks to Ben Palmer for use of Coimetrophobia: 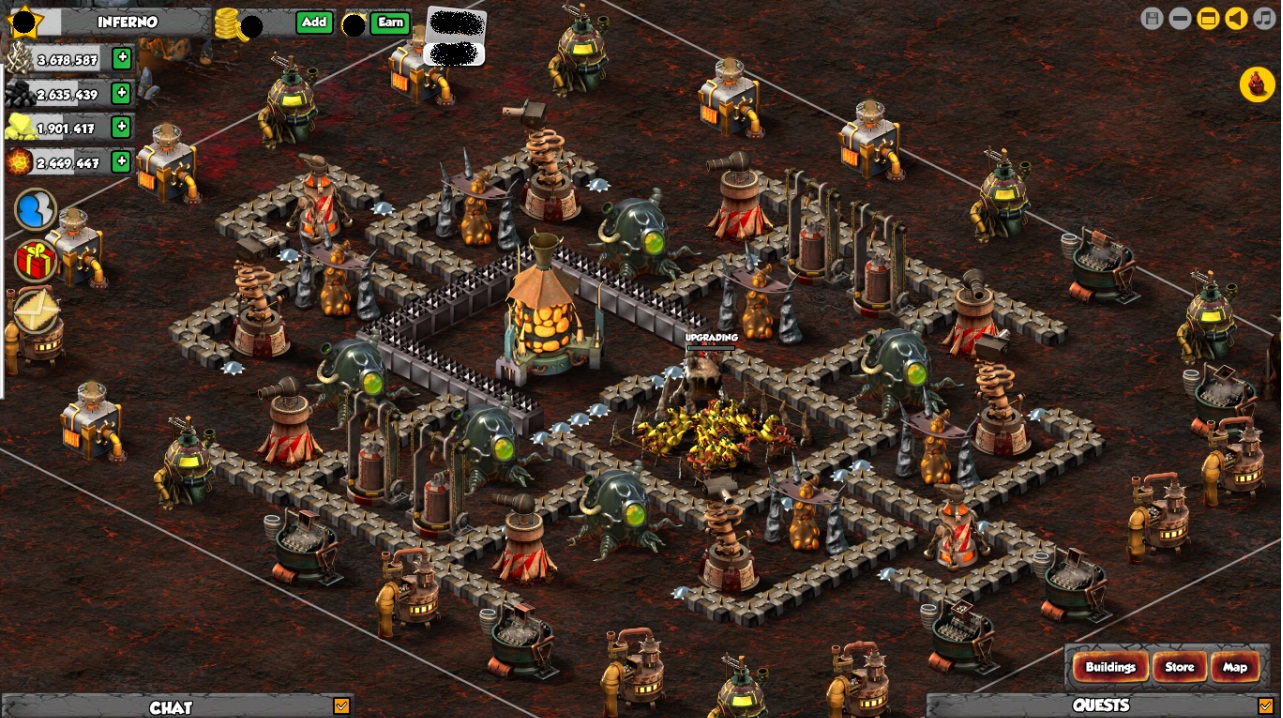