So the lack of Uranium usually cause trouble for everyone. Here’s a guide on how to grind the level 50 Helio. When I began to do it I was level 38 with a level 5 Warp Gate. I also asked a friend in my Alliance to try it out. He was level 33, Warp Gate level 4, Rhinos level 4 and Specters level 1. That guy managed to get away with 330.000 Uranium. I can’t promise that you can do it at level 32 but I’d love to hear from you and see how it works out.

I do have a trick to get 30.000 Uranium though without any losses at all.

Scout the Helio Legion at level 50. See that lone tower in the north? That’s what you’re going for. Drop Specters in the north and let them make their way down towards the Reactor. Once they killed it, withdraw. I started this many levels ago so it should work for anyone who’s got Specters. If you want you can let them kill the Staging Area to the left but that’s about it. Then the towers will start shooting.

Now on to the real grinding. These are my prerequisites now:

This has to be done in two waves. Expect to lose all your Rhinos and some of your Specters.

Wave 1 starts at the bottom. I found it easiest to start here since there’s a X-1 at the far left that the Specters can handle on their own. Start by dropping 8 Specters in the south below the Warp Gate (WG). If the GUI is in the way, move it to the left or right. The Specters can take out the WG without being attacked. As soon as they are finished with the WG, drop 7 Rhinos below the Concussion Tower (CT). The aim for this wave is to take out the 3 southern towers. As soon as the Rhinos are killed you withdraw. This attack should have made you 30k of Uranium with a loss of 7k (cost of the Rhinos).

Wave 2 starts just below the Gun Tower to the South West. To be specific, the one beside the Barracks. This time start with 8 Rhinos. Make sure they are out of range from the teslas. As soon as you’ve dropped the Rhinos drop 7 Specters just below. Now you should be able to enjoy the show as you get 400.000+ Uranium. I let the Specters go all out and sometimes leave them to be killed. The choice is up to you. 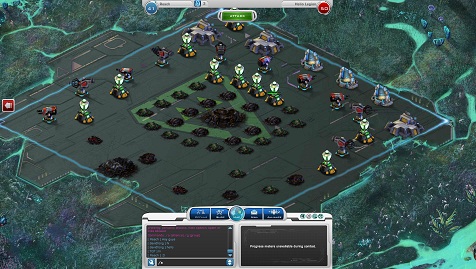 The final amount differs for me. Sometimes I get just above 300k and sometimes 450k. Even so this is a simple strategy without too many drops.

Feel free to comment and make suggestion how to improve the strategy. Although I’d like to keep it as simple as possible. 3 drops at the most each wave.