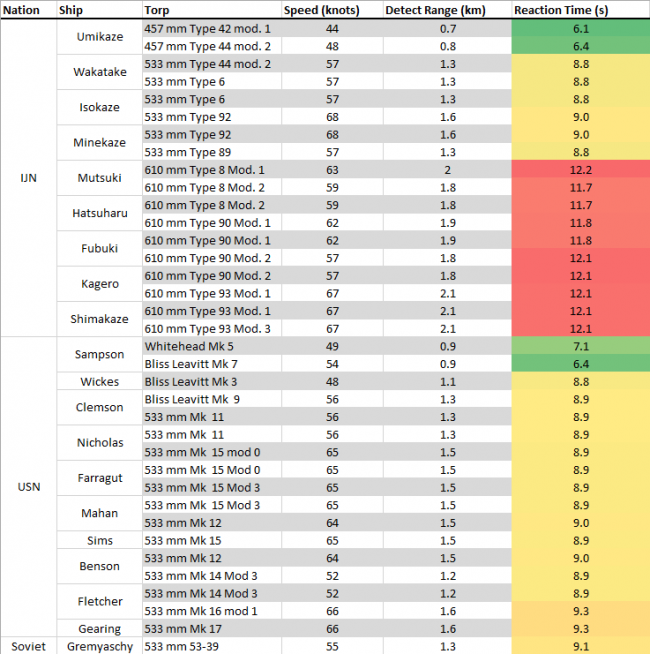 I’d always opted for the shorter range torps in CBT because at the time, it was treated as a fact that torp detection range is simply a fixed percentage of range. However, based on new information, it now appears that was not entirely correct.

Thus, it seems longer range options are in fact worthy of consideration, although truth be told, I’ve not actually been able to personally verify any of this information. Not that I have specific reason to be distrustful, but it’s rather unscientific.

Anyway, I made a spreadsheet that calculates the reaction time. This is the time it takes for the torpedo to travel across its detection range, ie. if you had a stationary target, the time he would have between seeing the torp and being hit by the torp if he remained stationary. Obviously in a real game, if you’re not moving perpendicular to the torp, you’ll have more (or less) time to react, you’ll have more time to react if an aircraft or another ship spots them further out, and how easy they are to dodge depends on how well the spread was placed. It also ignores the first rule of torp dodging, which is that dodging starts before the torps are visible. Nevertheless, this gives a useful indication of how difficult a torp is to dodge. I’ve not seen this done yet for every torp with a known detection range, so hopefully I’m not wasting my own time here.

Distances and speeds are scaled weird in this game, so I’m using a conversion factor of 1 knot = 2.6 in game meters per second. Note that all these units are using in game units; the knots speed comes from info given in port, and distances are what you get when you hold down alt in game, with seconds measured on stopwatch. I derived this conversion factor by firing some torps into some islands, using a stopwatch to time it and alt to measure the distance to impact. Obviously there’s some measurement error in there, and I only used 4 samples, but it should be pretty accurate, certainly accurate enough for this. Also, I only verified this for the stock torps on the Minekaze. I’m going to assume that the torp speeds shown in harbor are not arbitrary and are all on the same linear scale; Again, I would encourage others to repeat my experiment and see if they get the same result, but it seems to be consistent with what I’ve seen of other’s work on the same topic.

I have not included cruiser torps because their detection range was not given in the above source. Aircraft torps also not included, but this doesn’t really apply to them anyway.

We can see that the low tier torps are maybe a bit OP considering the lower skill levels and slower ships found at that tier. Starting with Wickes, USN stays pretty much the same all the way up the line. IJN is similar except that it takes a big hit (~3 seconds) starting with the pain train that is the Mutsuki… there, another thing you can complain about regarding that ship, the Mutsuki stock torps are worse than Shimakaze’s (if only slightly). In terms of answering my original question… for most ships, there isn’t really much difference between the two options. Minekaze upgraded torps actually seem to be slightly better… however, I would still stick to the much faster stock torps on that. Although the longer range torp, by this metric, is harder to dodge, the faster torps will be much harder to dodge in close range knife fights with other DDs where the detection range isn’t a factor. Since the Minekaze has shit for guns and I rarely torp past 7 km due to the its stealth, I think this is a reasonable choice. Finally, note that these reaction times are less than a typical BB’s rudder shift time; once again, dodging starts before the torps are visible!

Anyway if, you spot any errors, or if you can confirm/dispute any of my measurements, please let me know.