The Order is unlocked when you reach 2050 points of prestige, through the quest in a new map “Hall of Greatness” reachable from Aelinar.

Once unlocked you’ll be able to access to your order through the key “L” or on the top left corner.

The order is divided in 5 page: 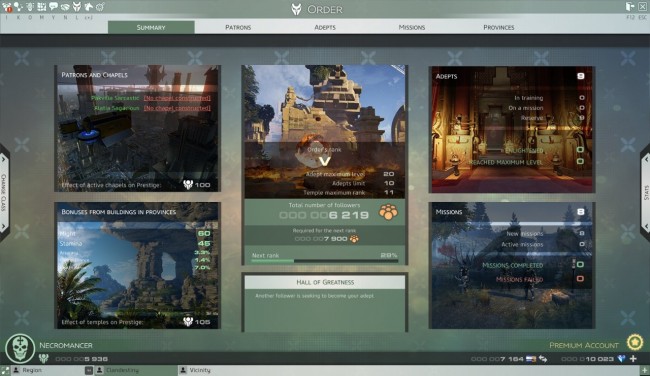 As the name says here you have an overview of your order, in the first column you have the info about your building in provinces and their relative patrons, in the middle you see your Followers (which increase your order’s rank) and in the little box in the bottom are displayed the followers that wannna be your adept, while in the last column you see the information about your adepts and missions such as their number, their state, avaible missions and so on. 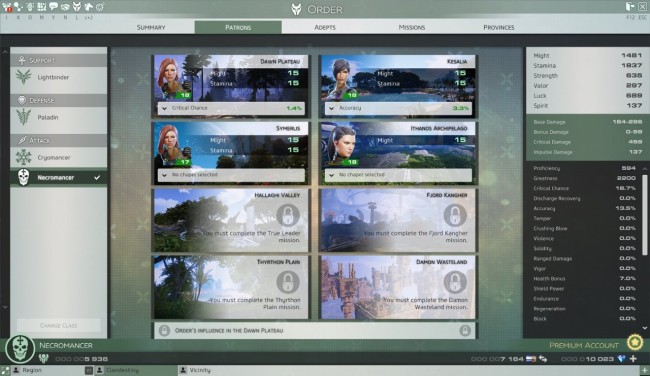 In this page you can see the adepts that you own, firstly you’ll have 8 slot for your adepts, that will increase reaching the rank signed in every locked slot.

As you can see in the top-right of the pic, every adept has his own stats:

-Rank: you distinguish it from the color of his border following the same rule cited beforeGrey<Green<Blue<Purple;

–Level and relative exp bar: at the beginning they have max level of 10 that will increase as your rank will be higher;

-Stats: here is the most important information that you have to care, every adept has two random ability with their own randomly assigned level that come from 1 to 5 and they are PERMANENT, while it is not the number under each ability, it will increase with the level and rank of your adept, obviously higher is the level of his ability higher it will be able to reach.

Under the adept’s stats box you have the the possibility toenlighten or dismiss your selected adept.

By enlightenment you can increase the rank of your adept using object you’ll able to obtain through quests/dungeons.

With the “Make a missionary” button you will dismiss your adept in exchange of a little award. 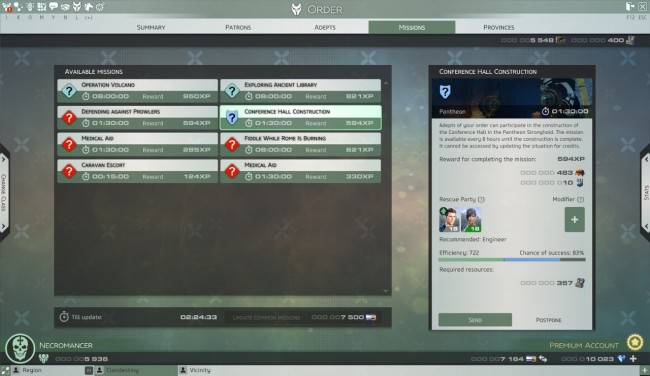 Here you have the list of avaible missions for your adepts at the left.

The missions are divided by the nature of them and you recognize them from the symbol near them:

-Azure rhombus with “?”: order developing missions, basically were you can obtain followers

-Red rhombus with “?”: combat missions, where you can obtain gifts an currency that you need to upgrade your building’s rank

-Yellow rhombus with “?”: gathering resources, where you obtain the neccesary resourse to send your adepts in missions(for this kind of missions you don’t require any resource)

-Blue shield with “?”: pantheon’s missions, will be unlocked as soon as a construction of a building in pantheon will be started, you will be rewarded with gift and contructions resources that will automacally go to the pantheon’s building.

In the right side you see the detail of mission you’ve pointed:

-it has a little description of it;

-rewards: the rewarded XP will be divided with every adept you’ve sent in this missions and the amount of XP that your adept will receive is directly related with their efficiency contribution in the mission)

-rescue party: you choose which adept to send in this mission, in every mission there will be one or more recommended class of adept which will have an efficiency bonus in this mission

-modifier: you can use some consumable that you’ll able to buy once your pantheon will unlock the special operations headquarters, basically they give you a boost like an additional ability of your adept such as decrease the difficulty of mission by #%

-required resource: currency that you need to send your adepts to do the missions(except the gathering one), there are only 2 types of resource, ammo and supplies, both obtainable through gathering missions or dungeon’s reward. 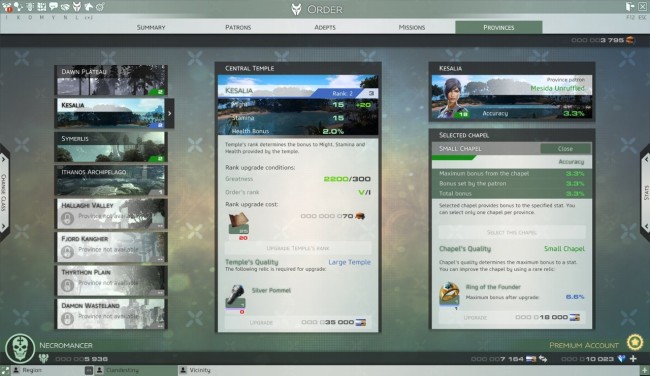 Here is your provinces, at the beginning you’ll have only one province that will increase by completing special Hall of Greatness quests that you will receive improving your chacter’s prestige.

As you can see in the middle column, every province has his own Rank and Quality.

Rank: to upgrade it you need an item called Holy Text(obtainable by quests and dungeon’s reward) and Gifts(from adept’s missions), upgrading your province rank will only increase the value signed on the top.

Quality: to upgrade it you need a special item obtainable only through dungeon’s reward(the dungeon will be randomly assigned every 2 days far the date of your last completion), it will let you to upgrade your chapels.

Chapels: every province has 6 different chapels that give usefull bonus for your main character such as accuracy or crushing blow, it can be upgraded to the same level of his province’s quality, using the same items needed to upgrade the quality of province.

Also remember again that in order to benefit these bonus you need to assign an adept, as patron of the province, with the or higher rank.

-The most usefull abilities of adepts are: mission’s duration and mission’s difficulty, + followers are good too expecially when you are low rank;

-Everyday you’ll have new followers that wanna join your order, and when you have them if there’s one better than one that you own, you should make a missionary your worse adept then hire and dismiss the new ones starting from the worse so you’ll end up with a new better adept and some followers obtained by dismissing the adepts that you don’t need. This process is usefull expecially for low rank as it help you to improve it also it don’t let you with a empty hole as other suggests.

-Is Highly recommended to enlighten only adepts with 8/10 or more ability level.