Clash of Clans TH8 Farming Base Design by 3TomBro3

Hi, I’m 3TomBro3 and this is my third base post on this sub. This post is for my latest creation of a TH8 farming base. I have named it the ‘Niner Terminator’ because I know that as a TH8 your worst enemy is a TH9 with their 4 spells and deadly archer queen. This base is intended to and has proven to stop TH9s from taking a majority of your resources and your DE so I believe the name is fitting. If anyone has an idea for a new name I’m all ears because I think it’s kind of lame. This base is inspired by other labyrinth bases created by forum users. I have seen awesome results with this base and I think it looks pretty cool so I hope you take a shot at it yourself on your own TH8 journey. Although the read is long I suggest you look over everything I say if you plan on using the base so you can get the most out of using it. 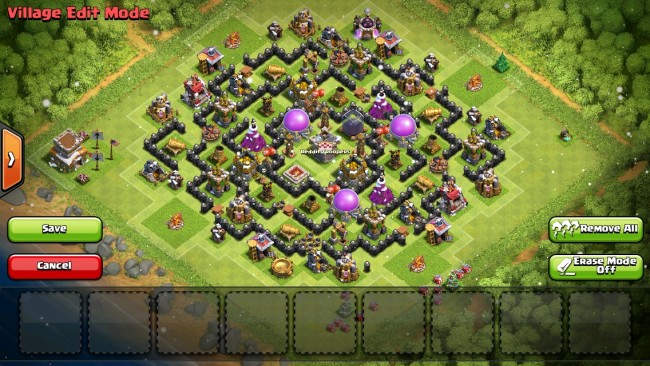 Possible improved trap placement moved further into base.*Please take note that the rest of the pictures will be of the original base, but this base may be better. along with walls and defenses and traps only and just walls and traps 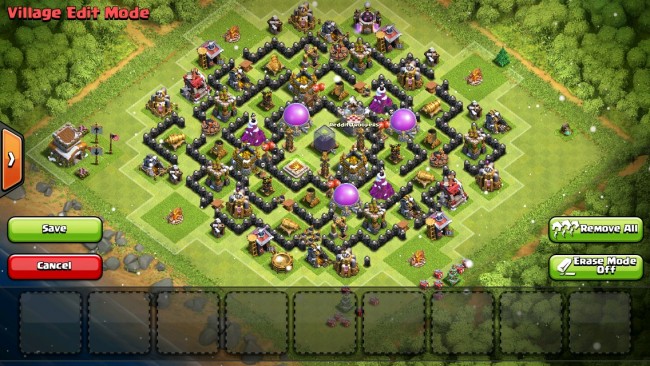 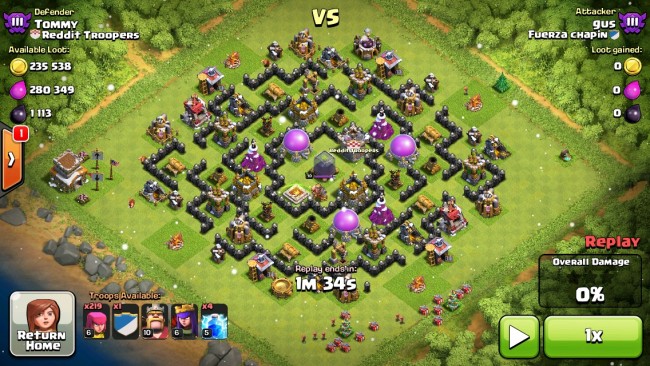 Overview of the Base:

This base features the following. Quadrated mortars covering most of the base and all of the storages with at least 2 walls in between them and the edge of the base to protect against barch,

triangulated wizard towers covering all but one of the storages,

triangulated air defenses, covering all of the storages, which also serves as tanks for air troops targeting them,

and of course, tons of funneling

How it Works (or at least how it should work): This is a labyrinth base inspired by other labyrinth bases I have seen on the forums. This base should take advantage of troop AI to make it tough to break into the storages or the core. Giants and barbarians along with other ground troops of their nature usually make their way in a circle around the base and through all the traps that follow that course. Archers follow behind them along with other ranged troops and these are usually taken out by splash damage buildings. The base is set up so it is hard to use one type of attack army to take it down. The equally spread splash damage along with semi-centralized mortars and wizard towers make it tough to barch and also tough to lightning multiple splash defenses. The spread of point defenses along the edge to guide giants is very effective and takes advantage of their silly AI, getting rid of pesky TH9s and 10s with level 6 giants. The base is spread in such a way so that all troops are funneled into areas where they can easily be taken out by traps or other defenses, with many entrances being occupied by giant bombs and other traps. Many times I have seen enemy troops funnel all the way around the core missing all of the dark elixir even with an archer queen. The space between the DE and all other buildings provides an invisible barrier which makes troops retarget to the closest building when the DE is too far away. The traps play a large part of this base, with the seeking air mines in optimal locations for killing high HP air troops and air bombs covering a majority of the storages to kill off hordes of minions. The spring traps are placed between defenses and bombs are placed in front of storages to kill large groups of teir one troops. The skeleton traps are also used towards the middle to distract enemy troops while telsas kill them quickly. Wizard towers also cover a large majority of the funnels and air defenses are equally spread covering the whole base against giant-healer strats and dragons. The large amount of DPS in the core is very effective in killing any troops that survive through the other two levels of defenses and the base leads them right around the DE storage. That along with a centralized CC which activates when attackers reach the inside of the walls along with a barbarian king in the core deal enough damage to take out strong troops that make it to the core.

Tips While Using the Base: To get the most out of using this base I recommend doing the following. Keeping a full CC with high DPS troops is very effective in ruining attacks along with keeping your barb king awake when you log off. It would also be more effective to upgrade different defenses at a time than just upgrading say all your splash defense or air defenses at once so you can deter certain types of attacks. I also recommend that if you have over 20k dark elixir you should use the improved DE protection version I displayed above.

Defense Logs: Here is the only attacks that were made on me besides TH snipes while using this base. Over 90% of the attacks on my base were TH snipes. These logs range from 1700 trophies to 2100 trophies.

This attacker was only able to get 1 storage with his near maxed barch army and 240 troop space.

This attacker was able to get one storage with his 16 level 6 giants and 124 archers along with a heal spell. The wallbreakers didn’t do much for him either.

This attacker used his whole barch army, 2 heals spells and his archer queen to get half of my storages and none of my dark elixir storage.

This TH9 barch used his barbarian king in his attack to get just a little over half my storages.

This TH9 used his barch army along with 2 maxed heals and one maxed rage spell to get 2 of my storages and none of my DE storage.

This TH10 used his 18 giants and 3 healers along with some archers and a maxed CC PEKKA to get all but one of my storages and none of my DE.

This TH9 used all archers along with his BK and AQ and 4 lightning spells to take out my outermost mortars, he was able to get 2/3 of my storages and none of my DE storage.

Overall Log Sheet: Above are just the real attacks on my base. I have not included the 40+ TH snipes in my journey from 1700 to 2100 trophies. A lot of these were by TH9s and 10s with full armies who decided to only take my TH. This should show the sheer awesomeness factor which the base possesses that not even high levels want to attack it .

To conclude, I hope you use this base and see the same results that I have. If your interested or would like to suggest something or just point anything out then please comment below. I’m open to all suggestions. Thanks for reading!