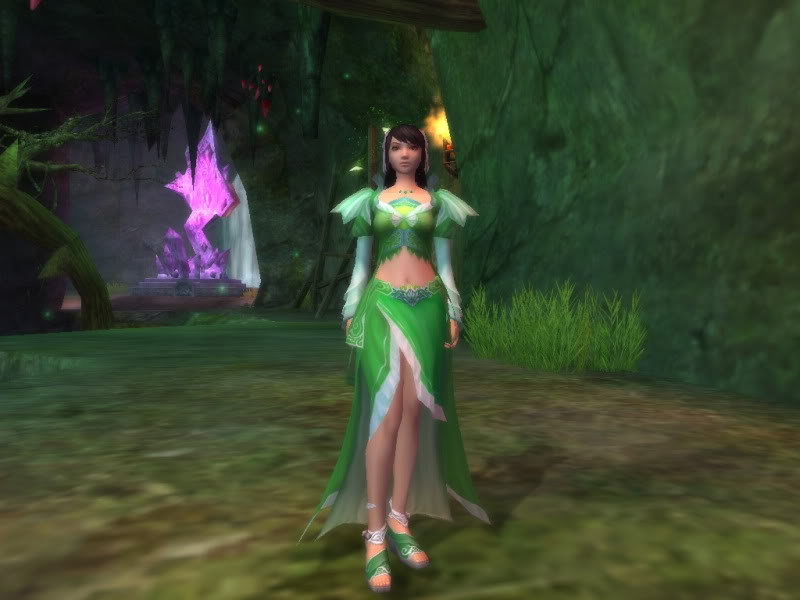 In conclusion, Minstrel’s stats is all balance all, and their stats is EXACTLY the same as Lotus, except that Lotus has more mana and Minstrel has a higher dodge.

Adding point : to maximize the specialty of a Minstrel ( killer x2 skill, adding all the level up point to Agility caterogy is the best.

However, when equipping the Gem, you must equip Stamina Gem to keep your HP high, Agility Gem won’t be neccessary

Always max your book 5 since it contain te Frenzy Fireball skill. Book 2 is also important, since it contain teleport skill, which is very important in pk. Book 4,6 is not really important. Also because in pvp, the damage from book 3 (the two trap isn’t great in damage), in pvp, Minstrel use it to get the status effect, not the damage. Eventhough book 6 have a good effect that can take away the opponent’s mana, but as soon as you reach level 65, after learning the skill from book 7, book 6 become weaker, because the mana reduction in book 7 is double book 6. 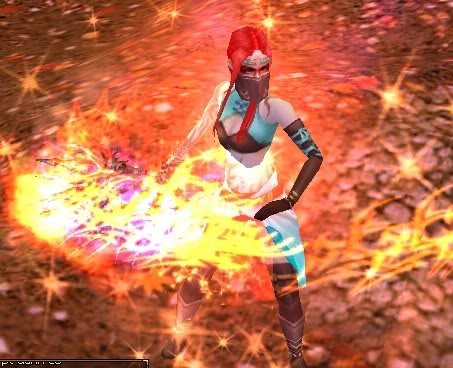 I use short word for the long skill name……

—–Start with defensive stance : —>Pattern—> walk to opponent, don’t stay too close, just a litttttle bit a part—-> Ball Grain—> Blooming —> wait until Pattern end —> Trigger …. Then chain up with Frenzy Fireball —> Skull Mark –> skill from book 7—> if their mana is still not 0, then use Ferrule, if it is then use ColderWater–>run away *thanks to defensive stance opponent may never catch you—> keep running , teleport and Frenzy Fireball away until the skill Pattern cool down.

—–Start with offensive stance : —>Pattern—> walk to opponent, don’t stay too close, just a litttttle bit a part—-> ExplosionRing—>Ball Grain—> Blooming—>wait until Pattern end —> Trigger…. Then chain up with Frenzy Fireball —> Skull Mark –> skill from book 7—> if their mana is still not 0, then use Ferrule, if it is then use ColderWater–>run away *thanks to defensive stance opponent may never catch you—> keep running , teleport and Frenzy Fireball away until the skill Pattern cool down.

—–Start with defensive stance:—>Pattern—> walk to opponent, don’t stay too close, just a litttttle bit a part—>Ball Grain—> Blooming—> teleport away—>wait until Pattern end —> Trigger…. Then chain up with Frenzy Fireball —> Skull Mark –> skill from book 7—> Colder water–> stay and shoot Frenzy —-> Follow up with Pattern after it cool down

1—It is important for Minstrel to use skill Basice Conceal after Teleport
2—Many Sp Attacker WILL stay put in 1 place and shoot skill except for L.O, they will run and find a place to heal. So use skill teleport to chase them down
3— Always use Frenzy Fire Ball whenever it cool down
4— Defensive stance WILL lower opponent’s reflex.
5— IMPORTANTLY, if your first attack –- Pattern of Binding is miss in the beginning, then teleport and use basic conceal right away. DO NOT try to stay either with Frenzy fireball or the traps family,

People may ask which is more important in Minstrel – Fire Gem that increase fire power or Crit Attack Gem. Keep in mind that Trap will never does critical hit. It is great if you can critical hit when the opponent is in state of Frenzy fireball — x2 + x2 = x4 . While Fire Gems will also increase the burn damage as well as regular attack from Parallel Sword. It is up to you to build to whichever way you like 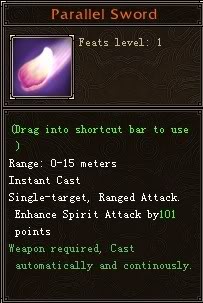 -Parallel Sword-— A single ranged attack . Auto Cast . Damage from skill varied upon the Level of the book and varied upon the Sp. Attack from the caster. A basic skill with no explanation is need. 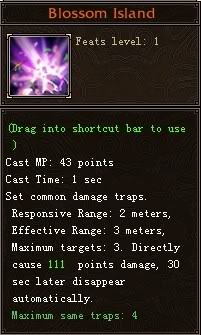 -Blossom Island-— Basic trap. Up to 6 trap of this kind may be deploy at 1 time. Damage within 3 meters if touch. Maximum target is 3. If left untouch, 30 second later will disappear. Damage is direct damage ( does the exact damage as written to a player, and does x5 to a monster). Delay: 1 sec. Cast time require: 1 sec 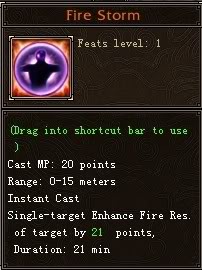 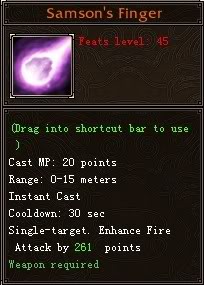 -Samson’s Finger-— A single target range skill. Does an xx damage of Fire to an opponent. Damage varied upon the feat level, the fire power level of the caster, and the fire resistance of the opponent) Delay: 30 secLearn when Book 2 Level is 45 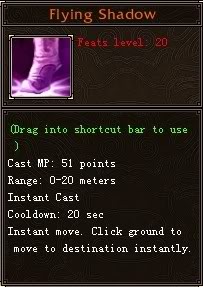 -Flying Shadow-— A teleport move. able to disappear an reappear in another place within 20 meters. Delay start at 20 sec, and decrease by 1 sec every 10 feat level. This is the skill that made Minstrel uncatchable when pvp with a melee class. Learn when Book 2 Level is 20 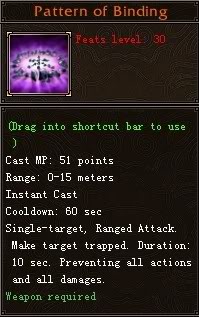 Pattern of Binding— Single Range Skill. In simple English definition, the skill will make the opponent –> unable to move, unable to use any item. unable to use any skill, and all attack that hit them will be consider as “negated”……. also another effect that it cause but many people havn’t notice is that it will take away all the buff and negative buff from the monster (monster only… or boss too). Delay: 60 secLearn when Book 2 Level is 30 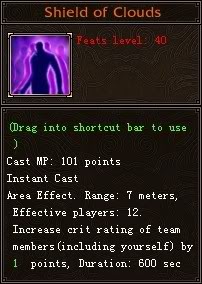 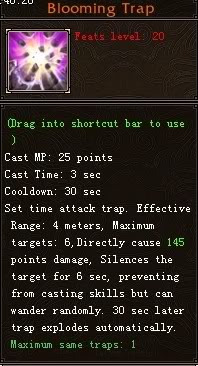 -Blooming Trap- –A stronger trap. Castime is 3 second. Delay: 30 sec. Will blow up in 30 seconds or will blow up if trigger by skill Trigger. When blow up, will damage directly to a maximum of 6 target, and silence that (able to walk, but unable to uses any skill) for 6 second. Only 1 trap of this kind may be deploy at a time. This trap is part of many combo in Minstrel’s pocket. Learn when Book 3 Level is 20 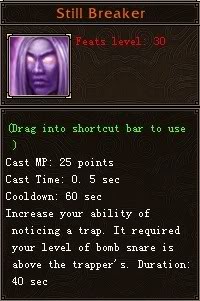 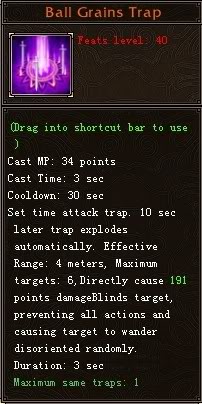 -Ball Grains Trap- — The strongest trap. Castime is 3 second. Delay: 30 sec. Will blow up in 10 second after deploy. When blow up, will damage directly to a maximum of 6 target and blind them (unable to use skill or item, and running in a random place). Only 1 trap of this kind may be deploy at a time. This trap does the most damage. Learn when Book 3 Level is 40 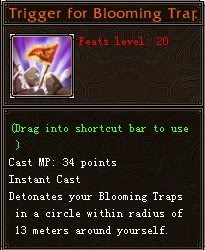 -Trigger for Blooming Trap- — hmm, I was wondering why this skill fall in this book… Shouldn’t it remain in book 3 with other Trap family ? Anyway, simple description : Use this to blow up your blooming trap. Learn when Book 4 Level is 20 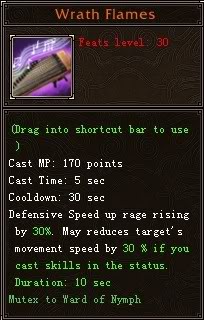 -Wrath Flames- –Defensive Stance of Minstrel. This stance is use mostly in a 1 vs 1 fight against another player. This stance speed up rage by 30% and reduce the opponent’s moving speed by 30% if they get hit by any of your attack. Learn when Book 4 Level is 30 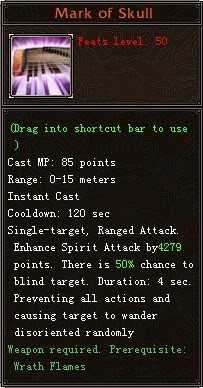 -Mark of Skull- –Single target range attack. This attack have a 50% chance of blinding the opponent for 4 sec. May only use when Wrath Flames is buffed. Learn when Book 4 Level is 40 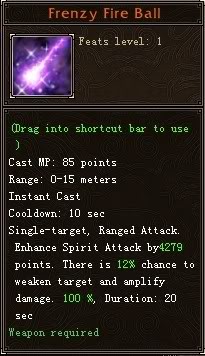 -Frenzy Fire Ball- — Ok this is the skil that makes Minstrel in pvp and boss’s nightmare. Pretty much, without this skill, no one would play Minstrel > Delay: 10 sec (shortest delay in the 9 class’s skill). A Single target ranged attack. Damaged varied upon your Sp Attack and opponent’s Sp Def. And have a chance that will double ANY damage done to opponent in a 20 second period. Chance’s formula = start at 12% and increase by 2% every 10 feat level. My feat is 90, and I got 28%. ALSO, please note that the chance will also varied upon your “hit” stats and the opponent’s “reflex”. That’s why Minstrel must have high accuracy rating. 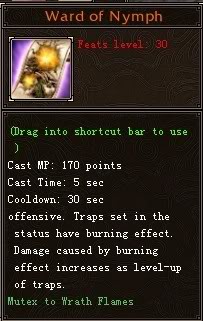 -Ward of Nymph- –Offensive Stance of Minstrel. This stance will cause your trap will have a burning effect against the enemy. Burn = damage overtime… I think its around 180 or something and varid upon your fire power. Also, it continue damage opponent around 10- 15 times in a 10 second period. This stance will rise your Rage meter tremendously (when use against a mob of monster). Because, raged meter is filled when u take damage or you damaged the opponent, in this case, “BURN” also consider as damage. This stance is mostly use in party grind or 6v6 battle or in pvp for Lotus expert. Learn when Book 5 Level is 30 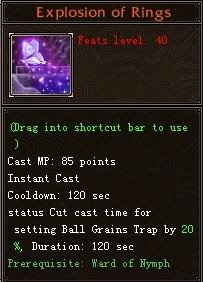 -Explosion Rings- — Self Buff Skill.This skill reduce the cast time require for Ball Grain Trap. The percentage deduct from the cast time increase as your feat increase. In feat 80, the deduction is 100%. Learn when Book 2 Level is 50 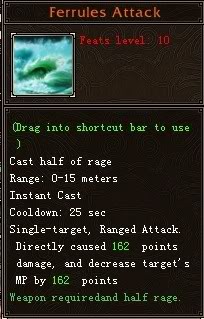 -Ferrules Attack– –Single Target Range attack. Require half your rage meter. Delay: 30 sec Will directly damage opponent and decrease their MP by a consider MP. This skill is only use full in battle against the melee class because the MP deduction isn’t really great, therefore it won’t do much good against Sp attacker because the have higher mana count. Around 1200 direct damage and 1150 mana deduction. Learn when Book 6 Level is 10 and your level is 20 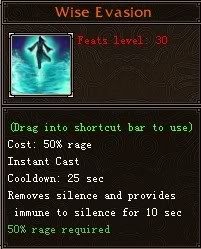 -Wise Evasion- –Self Buff Skill. Cure silence and remain immune to silence for 10 sec. Require half your raged meter. >”< u may ask what is silence, it’s the negative status that will cause you to have the blue thing (look like ice) under your feet. Learn when Book 6 Level is 30 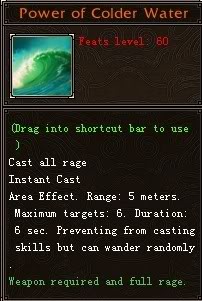 -Power of Colder Water- –AoE skill. Require full bar of rage. Cause 6 target to be silence. Simple as it. Part of many combo in Minstrel’s pocket Learn when Book 6Level is 60

-???????????- –Single Target Range attack Delay: 5 min. This skill will use up A LOT of mana. It also taking A LOT of mana away from opponent. Ok anyway, this skill require the book 7 and the skill (you can get them from ganef Assault). This skill require level 65. Anyway, this skill cause direct damage and decrease their mana by a A LOT. Also, it recover yourself by 10% the damage that the opponent take (the damage recover isn’t much, no one really care about this). In my level 90 feat. This skill uses up around 1k5 of mana in order to cast. Damage is 2k6, and mana deduct from opponent is 2k5. So use this together with Ferrules Attack, it will drain away most of melee attacker’s mana.