The figure is my saint build, which is PVE support base. Generally, the damaging skills are more sp efficient at level 6, 11, 16 and 21. 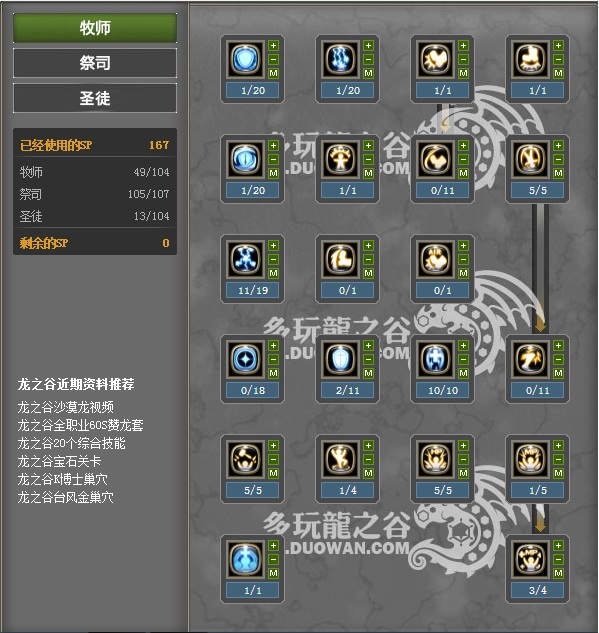 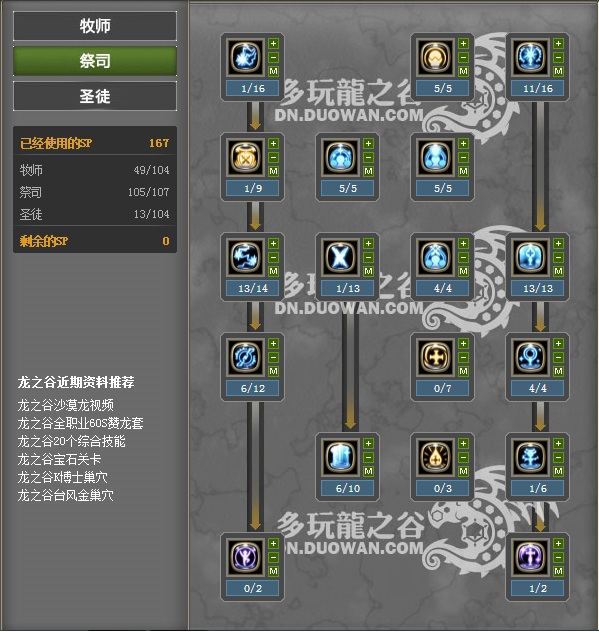 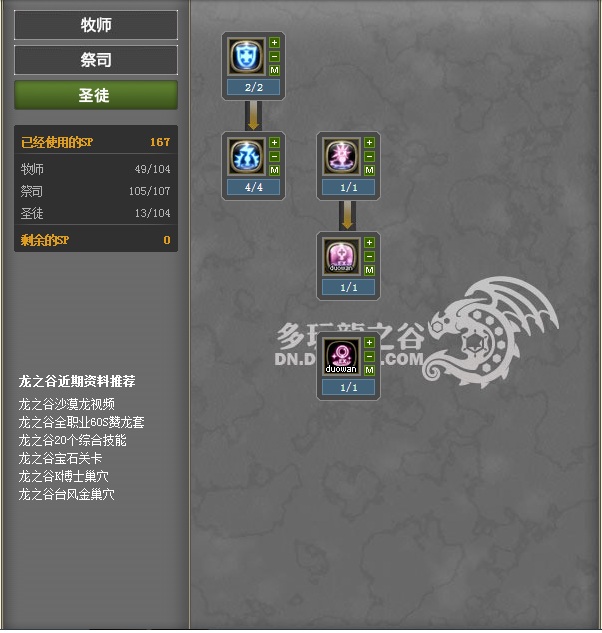 Cleric Skills:
*Heal ~ max aka level 10 to heal more.
*Sliding step ~ max aka level 5, since priest run too slow.
*Charge volt ~ chosen to be at level 11. This skill need to be near the big boss to get full hits. One of the light element skills which able to -15% light resist of the mobs/boss (not stackable with chain lightning and lightning arrow).
*Shield block ~ keep at level 2 to get 3 block counts, which is sufficient to save us a life. This skill is not recommended to cast too often, since it can cause the cancellation of your skills during the shield block buff period. However, it will still be useful in some situations, eg don’t want be kicked down from platform when being hit.
*Aerial evasion ~ only level 1, since I don’t pvp much, and it is sufficient for pve base.
*Counter blow ~ can rise up quickly after being knocked down by mobs. It helps to push back the mobs when rise up, and gain time to dash away.
*Physical mastery and thorn ~ max to gain more HP and physical defend.
*Hand of heal ~ party buff.
*Mental mastery and mental training ~ max mp is enough for us, but the mp regen is still useful (for solo and 8 men nest) for long time battles. Can choose at level 2 1st and keep the points, and only add more points if your mp drain too fast (mine is at level 2).

Priest Skills:
*Lightning arrow ~ level 1 to maintain the -15% light resist on mobs/boss (can cast after electric detonation).
*Mind breaker ~ level 1.
*Chain lightning ~ can be at level 11 (my current level) or level 13 (maybe will up to level 13). One of the best dps skill for priest, and able to -15% light resist. At most can get 3 hits on single big boss (no small mobs around). However, the max number of electric transmission is increased per 2 level of skill increment.
*Electric detonation ~ keep at level 6, since it is not as nice as T3 version. All the light resist buff on mobs/boss will be gone after the electric detonation. Can serve as SA breaking skill, eg at kalahan stage.
*Grand cross~ level 1 is sufficient, since it is a slow casting skill, and the SA of the skill is not high.
*Holy bust ~ being buffed in T4. Good for the aoe and clearing small mobs.
*Magical wand mastery ~ max for more magical attack.
*Bless of light, protection shell, striking ~ max all buff for support base. It will be good to make a striking skill ring, for the additional 3% attack buff.
*Relic of lightning ~ keep at level 11. The damage still ok with the EX skill.
*Relic of heal ~ max for more milk. It will be good to make a skill earring for more milk.
*Relic of cure ~ max for more light attack buff.
*Relic of hold ~ level 1 only (PVE base). Help in the relic count for relic of shock, and able to mass bind small mobs, which is useful in some situations.
*Relic of miracle ~ level 1 is sufficient, for the party damage reduction. It is one of the buff type damage reduction skill, and only can reach cap of 75% together with protection shell buff.

Saint Skills:
*Holy shield ~ max it to get 60% magical attack heal per hit. It would be more when you casting skills ^_^ A skill necklace can be make to get 70% of magical attack heal per hit.
*Relic of shock ~ chosen to be maxed, since I like this skill very much. Can deal quite some damage to big boss. Also choose to get a skill ring for this skill ^_^
*Relic of lightning EX ~ a good EX to strengthen the relic of light, and gain additional -15% light resist of mobs/boss.
*Relic of heal EX ~ another very nice EX. Make the aoe of heal become 15m. However, there must be a member / relic near the relic of heal to make it 15m (bug??).
*Relic of cure EX ~ although being nerfed, I will still farm for it. Once cast the relic, the debuff on caster will be cured and the mobs near the relic will be pushed away. The remaining party members (within 10m) will be cured in 1st wave, which is 2.5sec after the casting motion started. After that, the light attack buff (which duration is 17sec) and the curing wave will be refreshed every 5 sec with mobs near the relic (bug??, since the skill itself never stated that the refreshing wave will delay), and every 10 sec without mobs nearby. The advantages of this EX are the larger AOE, and push the mobs nearby when cast it.