Hi guys, firstly i would like to apologize for my language, English is not my first language so please forgive me for bad spelling and grammar :)

Highlights of a Templar

– Templar is the Main/Full Tank class in Aion
– Templar will be the wall in the pvp
– Templar born to lift Sword and Shield and lead the allies as the meat shield to the endless war.

From the points above we have known that:

Templar has a very high defense HP/Armor compare to the other classes, and like every
other mmos tanker class, Templar has the lowest damage output.

Since pvp build is the way we want to grind the templar up, the focus is on attack manastones <physical> +Attack and +Physical Crit, BUT being a templar we have a huge advantage of Block Rate where they come from armor sets and shield/board. By keeping a balance stats between Block Rate and Attack Templar almost invulnerable to any other physical classes; Templar, Gladiator, Assassin, Chanter and Ranger.

Let us see how we socket them stones;

From researches of many veteran players, we are advised to hit 2100->2200 block lvl 42-50. From experience I had, I totally agree on that, I have seen and played many 40-50 chars on friends’, I saw there was not any class has more than 2000accuracy, all of them were lower than that, so it really makes sense to hit block2100-2200. And to confirm that I had 2076 block at level 44 <PvP Gear> every physical class would see more of “Block” instead of DPS they make on me, that also without popping skills/buffs.

Now since we aim on 2200 Block, we dont want to fill every slots we have with block do we? Or we will ended up killing 1 Mosbear in 3-4 mins. Here how we socketBlock Attack and Phy Crit from lvl 1 to 50. “Wait what about HP” ? Well i believe HP stones arent not necessary till late game, maybe after 45+. We have enough base HP stat and Buff to carry on PVE/Instances but it really will not help on pvp since the stone lvl is only like giving max 40 HP/Stone. So we need to find the balance in level-range between manastones.

1 to 10, at this stage u really dont get much modification so just level and gear up.

30 to 40, you will be on Abyss most of the time for AP Points and Quest. Glad will jump on  You, Assassin will pop out behind you and what not.
Target: 1750 Block Must!! Rest sockets Phy Crit: Attack 2:1

40 to 50, Abyss is your ground, besides leveling up your level, you are forced to grind
Abyss Points for your gear.
Target: 2200 Block

PVP build Templar has no doubt but to aim Abyss Gear Set, the abyss set and instance set for templar is like Fire and Ice, or PVP and PVE. ALWAYS using Sword and Shield !!! I saw many Templars using 2-Handed sword running around and saying it is better to use them, for me its totally a big NO, if you want to use 2-Handed as a priority weapon might as well roll a Gladiator. But you can equip them as secondary weapon so that you can switch them over in the right situation, let us say switch to 2-Handed for extra damage while waiting on Cool downs. Shield not just giving us block, damage reduction and the most superbly important is, we have so many skills using Shield plus the triggered skills when you block attacks from enemy/ai.

In my experience before level 45 make Shield Abyss as your priority, to be honest its really pain in the fingers to collect the abyss set at this moment unless you have a solid group to go and always together to farm AP.

At level 37 you will get speed boot which is increase running speed by 20% from quest, get that. So before 45;

-Get Abyss Shield level 30, prefer 40. If you good in making Kinah you can use level 35 crafted Expert Shield before you lift the abyss shield.

-Try to craft or buy at least blue item gears level 37+ then you are already look solid on battle field.

For PVP Templar these are MUST!!

There are 2 types of Godstones which are, Damage and Ailments (Physical). I used socket damage Godstone on my weapon, but after researching and getting many information, apparently a Templar does not gain so much from Damage type of godstones, why? Damage Godstones work with Magical Boosting Power, and Templars have low on that. So Physical ailments the one we aim especially Paralysis and it interrupts skills too.

Finally on dueling the classes. Honestly after we have prepared for our manastones, godstones, gears and stigmas/skills, now you have to learn and find what is the best way or tactic you feel the most suitable for you, because everyone has different style of
pvping. You have to maximize the use of them, you need to prepare what are the stigmas to bring on facing which class. Here i share some important tips and experiences on dueling the class.

Tips:
– Dont be “Nervous/Panic” when someone jump on you, its only a game, u dead respawn and revenge.
– Bind the important keys on keyboard conveniently.
– Always bring Speed scrolls, Flying speed potion, foods, CCPots and Hp potions, without these you are pretty much dead already.
– Before you pick a fight see the situation around you and buff up.
– Dont waste all the stun skills at 1 chain. Lets say u trigger Shield stun-> hit it and dont pop shield bash immediately after that, use 2 damage skills followed by Shield Bash.

Vs Cleric and Chanter

Uhmmm these two classes i think are the hardest if we dont have a decent gears, but when You are lvl 50 we need and able to kill them in 1 chain skill, make use of Inescapable Judgment – Shield Bash when they are trying to heal and clear yourself with CC pots. If you able to distract them 1 or 2 times, unload the skills and finish them.

Vs Assassin and Gladiator

They are not easy to fight especially assassins where in almost every mmos out there, sins are the king of pvp. But since they are physical attack, we have many good skills to counter them, Unwavering Devotion and Stone Skinare very important to fight them. Use Empyrean Armor when your HP on 70%, and fight smartly maybe usingBlunting Severe Blow skill to decrease their Evasion and Accuracy, Shield Bash and unload other skills and when
they are try to run off, hit Inescapable Judgment and finish them for Abyss Points.

I had never much problem on fighting them, Use the advantage of the environment like trees, terrain or stones. Since they have many ailments, make use of CCPots, and try to get to the range using Steel wall Defense, when in rangeInescapable Judgment, damage them, followed by Shield Bash and unload all skills and thats it fatality.

I always got surprised nuke-damage by them and there wasn’t much I can do true story @_@, but if we are prepared in a fair fight, Aether Armor the first thing you want to pop-up, and Iron Skin will be helping so much by decreasing those crazy damage 50%. So while the buffs are up, you have to get to them, break their shield, maybe switch to 2-Handed quickly for some major damage and finish them off.

I believe here the gears and block differentiate you and your enemy.

To be honest i have not fought them that much, but one thing very sure you have to break them down in 1 chain skill just like sorcerer. They have so many ailments and debuffs, so while Iron Skin and Aether Armor are on, get them down and if it turns out unsuccessful, Charge -> Speed Pots and runaway @_@ and come back after cooldown.

Being a warrior Templar is great, we have many awesome armors and the appearance is just beastly :D. Templar is struggle at beginning of the game, there is not much we can do in PVP battlefield, I meant by not much is we might not be the fastest and highest DPS out there but still we are always counted. When you hit max level and decent gears, many people agree that Templars are the new king of PVP. As a Templar, you can beat every class down to ground but if you do not play smartly and out of luck, you could be easily taken down too. And remember Gears always play big role in MMO, no matter how smart you play, without or at least equal gear to your enemy you will have a hard time to win.

So guys, these are my experiences in Aion PVP-Build Templar, and it works amazingly, if you are new to Aion, well “Welcome” xD and this guide will help you greatly to become a good PVPer Templar. Please let me know if I mentioned something wrong or you want to give me suggestions, feel free to open a discussion. After all I still have a lot to learn.

Have a nice day and have fun :D

Create a PVP radar chat, so you will be able to detect enemies around you. See the picture and make sure you drag out the PVP tab make it alone. 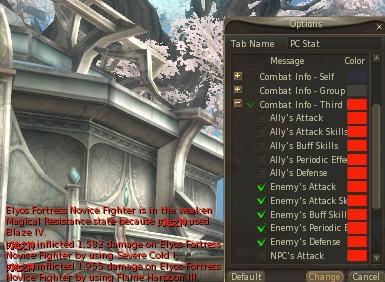