Assuming that you’ve stuck with the class through its terrible teens, your ranger and you should be having a pretty swell time by 25 (though, in the grand scheme of things, this is still pretty early in the game). Here are some ideas of what’s to come or what you should already (maybe) have a pretty good idea about.

Obviously, at 20, you received your first stigma, Arrow Deluge, which leaves you with one stigma slot to go for now. The best option for this second slot is–yeah, you guessed it, Sleep Arrow. This stigma is pivotal in both PvE and small scale PvP (if it’s Zerg Vs Zerg like fortress battles, chances are it will just get broken). Here’s a decent tip: You can actually sleep an enemy without aggroing it, though it will still attack if you’re too close when the sleep wears off. In instances this is especially useful, since you can play hero and sleep a patrol before it comes within range of the group, making for a pretty neat little pause button on their path. At 25 you get access to another essential stigma, yeah, you probably guessed it–again, Silence Arrow. This shot is great for interrupting annoying things like heals and Temporarily Armor Clad (another haphazardly named ability). At 30 your third Stigma slot opens its doors for entry (the fourth is at 40, then the fifth at 50; the advanced stigma quest starts at 45), this slot has a bit more freedom, though most rangers – yours truly included – will recommend Bow of Blessing. When stacked with Devotion, this nice little buff can give you some significant burst to blow things up with. 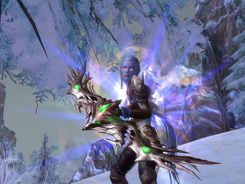 When your fourth and second to final stigma slot opens up, you have a lot more freedom with what to insert into it. I’m not sure if it’s because so few people have made it to 40 to come up with a consensus on what’s best, or if I just missed the memo. I think, though, a great stigma to use at this point is Snare Trap, which performs an aerial lockdown on the target. You may have seen other classes who have an aerial lockdown in their base abilities use it with grouping; it’s when the monster gets tossed into the air with an electrical effect. If you’re especially observant, you may have also noticed this is when your Aerial Wild Shot ability lights up for you to use. This fun little shot has a 0.5 second cooldown, so it can be spammed quite excitingly. And who isn’t a fan of a little spam? A note to save a little kinah: By level 40, Snare Trap actually has three available ranks out there to purchase; I settled for getting level 34s rank two, which is a heck of a lot cheaper than level 40s rank three. It hasn’t seemed to cause any issues with resists yet as it lands the majority of the time. During its duration, if your trigger finger is fast enough, you can get up to five shots off, dealing anywhere between one and two thousand damage.

Since Snare Trap starts at such a low level, you could decide to equip it at 30 instead of Bow of Blessing. They’re both pretty useful, so ultimately it’s your decision, but at the end of the day, I’d say Bow of Blessing probably comes out on top. Most of all, though, aerial lockdown annoys the hell out of people in PvP–that should be reason enough to pick it up, be it at 30 or 40.

Gear is obviously one of the main draws of an RPG of any variety, and through your 30s there’s no shortage of gear to pour hours into getting. Assuming you’ve been keeping up with all the quests in The Abyss, you should have accumulated a nice sum of points by your mid to late 30s even if you haven’t been actively ganking like a bloodthirsty gerbil. The level 30 blue Abyss gear will probably give you the most bang for your buck, you can get two pieces relatively cheaply. All of the Abyss gear has five sockets, which makes them pretty nifty for stacking Physical Crit. Rating. Those manastones should easily be your highest priority, though if you have to you can substitute Attack stones, which aren’t as good for rangers, but still help DPS. Your accessories are a good way to get your crit. rating up too, there’s a level 37 crafted necklace that has over 25 rating you should try your best to get your hands on, Fancy Judge’s Necklace–another interestingly named item.

At 37, you can start grinding for a blue ring and earring, whose quests start from Alsig Village in Morheim. The quest item you need to grind for from the Lepharists drop from the elite variety, and due to their location, they’re rather hard to grind solo by kiting so a group is recommended. The oaths, as they’re called, aren’t technically a quest item so they can be looted without being on the quest (or purchased from the Broker). There is also a repeatable quest to farm 60 of the non elite Lepharists in exchange for ten of the oaths. This is obviously a pretty easy way to grind it out solo, the 200 oaths required for both the ring and the earring take quite a bit of time to grind, but ultimately–it’s worth it. 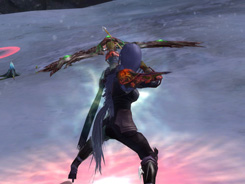 The last piece I’m going to mention is probably the second most important: boots. Speed increasing boots to boot. There are two options available: a PvP grind and a PvE grind. The first option is to grind out the Abyss boots; these are slightly better but take significantly longer to obtain, and really–there are better things to spend your hard earned Abyss Points on. The other better option, are the Silver Mane boots, whose stats are on par with the Abyss pair, but come equipped with less sockets. The quest for these boots is very similar to the accessories from the aforementioned quests–it requires you to gather Mau Hairs from elite Mau, 100 total. And like the Lepharist oaths they aren’t quest items so they can be gathered if you’re not on the quest or sold on the broker. A couple of the elite mobs can be killed solo by kiting, the Grapplers and the Pawsoldiers. You need 100 hairs and a random quest item, so it’ll keep you occupied for quite some time.

If you take the time and effort (which you should) to get those items, you should be able to get around 385 Crit. Rating, pretty nifty if you ask me. Since the rating begins to diminish at around 440, once you get that high you can begin exchanging crit. manastones for attack ones. Also, I believe it’s 10 rating for 1% crit. so by 440, you should be rockin’ a hefty 44% crit. if what I’ve heard is correct–though, considering I did hear it on the internet, there is a significant chance that it is not.

Lastly, and definitely most important–your weapon; there aren’t a lot of options available, but there are enough. The best option is the gold bow from Fire Temple, which ultimately isn’t worth farming for. One of the best more tangible options is the crafted Worthy Noble Salix Bow. Due to its bonuses, it’s better than the durable counterpart at 40 even. If that proves too difficult to attain, the reward for the final campaign quest in Morheim is almost as good. There’s also a spy quest down the line at 43 that leads to a gold bow reward, so that is definitely worth doing. I don’t have really anything to say about it since I haven’t had the chance to do it yet, but it’s something to check out for sure.

This should be a good heads up for what’s to come as you progress toward the mid to final stages of the leveling grind. Optimizing your gear as much as you can at any given level is recommended for all classes, and if you take the time to equip yourself with all of the gear mentioned, you should be able to easily mow through normal mobs with ease.