Now I know you want to get into all the juicy stuff such as strategy and what not, but before I discuss that you should first consider your character’s build. You can customize your characters strength and weakness threw the use of manastones, enchanting, food, drinks, scrolls, etc. However to keep it basic for beginners; I will stick to manastone and enchanting discussion.

Now that being said you could build your character to be in a basic categories’: Offensive, Defensive, and hybrid. Each one adds valuable options to the group. In addition, each comes with there own strength and weakness.

Offensive builds is where you want to take your opponent out before it takes you out. In that sense you most be able to react faster and out maneuver your opponent to use this build to its full potential. If you fail to do so, you leave your self vulnerable to a counter attack to your opponent. That being said these type of builds excel in spike damage in groups, so they have the time to prepare a proper assault on an enemy player, while have the time to retreat to the safety of the group to avoid being counter attack. These builds are generally more vulnerable (not always) to taking more incoming damage then say if you built hybrid or defensive.

Defensive builds are the opposite in the sense you try to out last your opponent threw your increased survivability. In order to bring this build to its full potential you most have the patience to deal with longer fights and not lose focus. Your objective as a defensive build is to interrupt your opponent’s combo flow as much as possible forcing them to make a critical mistake, wasting their opportunity to spike you down. If you can play the fight longer and stay focused, you can force your opponent to trip up. This build is especially common for healers in group fights. For their success largely depends on their ability to hamper their enemies attempts to spike damage them.

Hybrid builds are mix offensive and defense nature. For example crt has an offensive and defensive nature attached to it. When you land a crt hit, you will do more damage. In addition, you also stun your opponent. Thanks to this nature, crt makes a perfect example of a build that be used offensively or defensively. In groups hybrid builds are useful in that they play an offensive and defensive role at the same time. For example a sin or ranger could crt lock a dps attempting to spike a healer. In this situation not only did you kill the enemy, In addition you stunned your opponent which saved your healer.

Builds I would advise for classes as follows in no particular order of importance.

For enchanting offensively you will want to focus on increasing your weapon first as you level. Defensive will want to focus on a shield first (if you have one and are going for a shield defense spec), and then proceed to upgrade armor. While in the future you may be able to afford both, doing so while lving will be difficult.

For example my chanter is currently defensive specked since I live to pvp in groups with my legion. I use shield defense manastones and put priority on my shield. 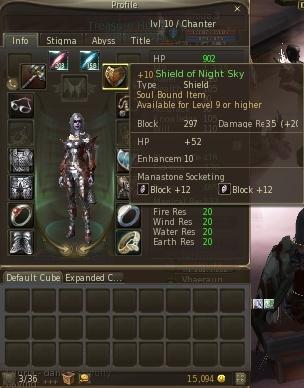 For those of you like to solo, there is good news and bad news for you. While the abyss grants the opportunity to attack unsuspecting opponents in a 1v1 scenario; one most use caution. In the abyss it is common to find solo players or small groups to pick off, the problem you say? Well to put it simply they, lets just say that their friendly faction isn’t to far away normally when they call for back up.

When you pvp alone, you keep what you kill. In other words all the abyss pts you earn threw damaging the target, go straight to you upon your opponent’s death. This is a bonus if you are trying to level up your abyss rank quickly. This is due to that if you are in a group, the pts are split evenly. Although this comes at great risk as well, for traveling alone increases your chance of death. If you die to an opponent in pvp, you will lose abyss points (note there is no exp penalty for dying in pvp).

As a solo player you want to catch your opponent off guard and finish him/her off before they have time to react. Due to this more offensive/hybrid builds are preferred here. While you could attempt a defensive build solo ganking spree, you give your opponent more time to react for a counter attack or escape.

Now I know what your thinking, “should I kill my opponent if there currently attacking a mob?” This is a common ethics question asked in any pvp game. Basically you have to go with your beliefs on this one. If you feel it is wrong then don’t do it. However, don’t expect your enemy to return you the favor. As this strategy does give an advantage that some will defiantly consider taking in solo play.

When camping a particular area, it is always a good idea to bring a kisk with you. A kisk is a bind on the go item that remains stationary on the ground. Hiding it in weal covered area, or a hard to reach spot is advised. Once you have your kisk in a safe area nearby, you can quickly return the favor of the unsuspecting prey that just killed you going, “omg wth I just killed you haxor”:

In addition it is always good to be mobile. Once you begin to kill the enemy, it will not be long before they shout out your location. It is best to stay on the move so the zerg doesn’t find you and take back some of those abyss pts earned.

In a group you want all 3 builds to be present. This way you can cover a little bit of everything, making it easier to overwhelm opponent(s). In addition in group vs. group fights it is very important to stay in formation. If you thin out to much, you just make easy pickings for your opponent(s)

Now then the formation my legion has used in the past and has found to work, Is to bunch up and push as a group. I know this sounds very simple and stupid just asking to be aoed….but it works. There are several reasons why this is a valid tactic and essential for survival in group play.

The first reason is the limit on healing range. Unlike most games, Aion is not very forgiving in healing range. If you move out of heal range, the healing spell will interrupt, if it is not instant cast. In addition, the range of healing magic in this game is noticeably smaller compared to others. That being said if some one runs to far ahead of the group two things happen. They die to focus fire from the enemy team, or the healer has to run an expose themselves to hostile fire to heal them. Obviously that is suicidal in both situations.

The second reason is the limit of ranged damage in Aion. Just like healing, the range is quite limited. Meaning if your ranged dps move to far ahead of the group, they expose themselves to melee attackers. In addition the same can be said about your opponents range. If you move as a group, you force your opponent ranged dps to expose them self to counter attack if they try to spike some one important such as a healer.

The third reason is to for retreating. If you retreat in a scattered formation, you will be picked off one by one and make it all the easier for a complete wipe. However if you retreat as a group, some of your opponent may get cocky and charge ahead of their group (you have no idea how often this actually happens…). In addition, backing off from the enemy group forces them to advance toward your groups new position to reestablish range. If they are unorganized, they will spread out a bit advancing on your groups position, making it all the easier to pick them off. Even better is if you retreat around a corner….. as you break line of sight of rangers and healers, leaving any melee dumb enough to charge ahead after your group with out support…. Usually leading to a very painful death.

When moving as a group you ideally want your stronger melees up front, such as Templar and Gladiator. In the middle you want your healers(to prevent melee ambush, and in the back you want your ranged dps… and your sins.
Now the sin role is pretty important here as they have to pivot a lot in the flow of combat. If they notice some one trying to ambush there back lines, they can stealth and return the favor to them; all the while warning there team of the threat. If your back lines are clear of enemies, the sin should focus on hit and run tactics threw out enemy lines. Kill the squishest target you can find (cough sorcs) and proceed to run away your pansy mane away back to your group before you get focus fired.

The Templar and Gladiator job is to hold the front lines of your group, all the while pressing into the lines of your enemy group. They key is to not to press to far in, but enough to pressure your opponents group to spit up. If your front line succeeds in this, your enemy squishes and healers become easy targets for your dps to spike down. In addition though Templar should focus on cc any one trying to advance into there group, or pull away opponents trying to flee or hiding in the mass of another group. The Gladiator should spam his aoe is up to continue to put pressure on the other group’s healer.

The healer servers as a guide point for the group. Your group leader should make your own healers, so your group doesn’t get carried away and out run there heal distance. It is also a good way to keep tabs on what is happening on your healers. Not only that but they make great rally points for knowing when to stop the advance or retreating, since they are in the middle of the formation. The ranged dps know not to pass the healers, while the templar and gladiators know to stay in front of healers. Having healers knowing when to move and where to hold there ground is essential to moving as a group basics.

The ranged dps obviously wants to hold up the back of the line as far as possible to slow down the incoming of melee dps attempting to kill them. However if the lack of melee dps threat, it is safe to move a bit closer to the melee lines. However, staying at the front of the group for long periods of time should be avoided…. for obvious reasons.

This is the end of the guide. Keep in mind this guide is made from my experience and what has worked. There are multiple ways to pvp, some of which that are not discussed in this guide simply b/c it would take to long to cover all of them. I hope you have found this guide useful and enjoy your pvp experience in Aion.