Do you like pushing your foes, kiting, and sniping them off from a distance? Then the air cra is the choice for you! In this guide I will be going over each of the air tree spells as well as passives and builds.

• Builds
What to stat, AP, MP, etc
Gear that gives essential stats such as AP

• Leveling
What monsters to farm to drop certain gear

The first spell is Homing arrow: 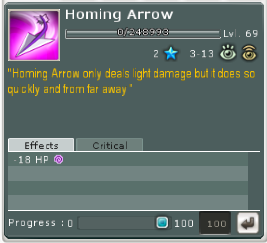 At only 2 AP and an astounding 10 range, Homing Arrow can be great for setting off your Windy Beacon which we will get into in a moment. The one downside however is that this spell is severely lacking in terms of damage. I only suggest using it if you happen to have 2 AP left over from using your other attacks or to push your enemy away with the Windy Beacon.

The second spell in your arsenal is the Windy Beacon: 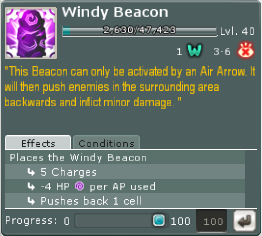 Windy Beacon costs 1 Wakfu Point and has a range of 6. It can also be cast over an obstacle which means you can put it behind a character or monster to stack damage with a spell called Storm Arrow. This beacon although not amazing can be very useful in both pvp and pve. I highly suggest leveling it for it has many uses.

Our third spell is Plaguing Arrow: 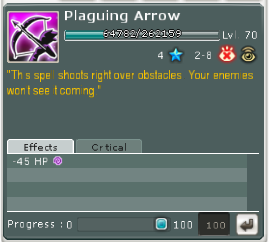 Plaguing Arrow costs 4 AP with a max range of 5 which can be modified. This spell’s main use is for shooting people behind an obstacle. It’s somewhat useful for when people or mobs are hiding behind a rock or other annoying little nooks. In PvP and PvE this can be pretty useful if you don’t want to hit your allies with your area of effect spells (aoes) but still do some damage during your turn.

Our Fourth Spell is Retreat Arrow: 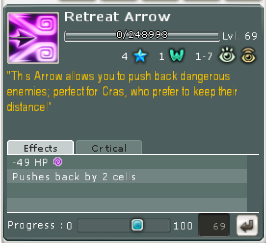 Retreating Arrow is a spell that comes at a really high cost of 4 AP 1 WP and a modifiable range of 4. This spell kind of seems not worth it at first but it also pushes enemies back by 2 whole cells and can be cast on tiles right in front of you. This spell is essential for those situations where you cannot get away with Beacon Sneak or if you just want to push someone or monster farther away from you.

Our Final spell is Storm Arrow: 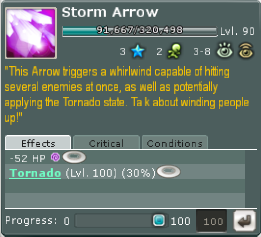 Keep in mind this has a twice per turn limit now

Storm Arrow is going to be your main damage dealing pumping attack spell at a cost of 3 AP 2 MP and a modifiable range of 6. At level 100 this spell gets a 30% chance to proc the Tornado State which is an extra (-27) hp base and on critical this jumps to 45%. This is where your Windy Beacon comes in really handy if you don’t mind the enemy being a tile closer to you. You can gain a pretty nice boost in damage by hitting a Windy Beacon with your aoe while still doing the 100% damage from the Storm Arrow. I personally tend to only do this if I need that little bit of extra damage and I only do it on my last storm arrow of the turn, so it’s entirely up to you. 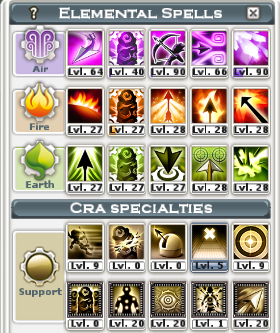 Please take note that you can POSSIBLY if needed make air beacon 35 since the damage does not change I made it that high to get 135% air damage percent. i’ll possibly be making major tweaks to this at a later date on the next respec so i’ll keep this part updated!

Your first two that you are going to want to max are Cra Precision and Powerful Shooting. 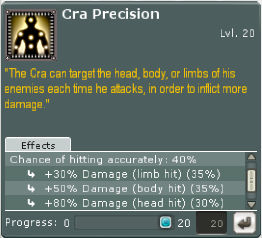 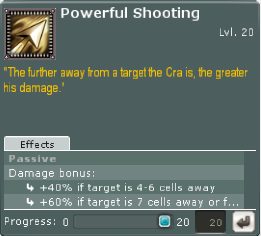 These two are your damage boosting passives. Cra Precision has a 40% chance to proc and when it does it can add 30% Damage, 50% Damage or 80% damage. This passive will be a fairly decent boost to your damage. Powerful Shooting on the other hand works a bit differently. It gives you a damage boost based on how far away the enemy is. If the enemy is 4 – 6 tiles away you gain +40% damage and if they are 7 tiles or more away you gain 60% damage. There are some rumors that this passive doesn’t work but I can assure you that it does and it is very much worth it.

The next passive you are going to want to start leveling is Heightened Vision. 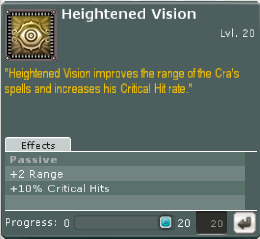 This passive increases your spells range by 2 at max and increases your critical chance by 10%. This is very useful especially since some of your air spells are kind of lacking in terms of range and also gives you more chances to proc Powerful Shooting!

Beacon Sneakin’ although not a passive is still one of your specialties that you will want to max. 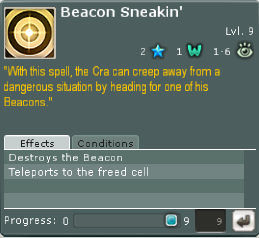 For a cost of 2 AP 1 WP at max Beacon Sneakin’ allows you to teleport to where your beacon currently is placed on the map while also destroying the beacon. This is your escape spell and is an absolute must have for PvP. It’s range has recently been lowered but it still a very handy tool for your arsenal.

The last passive that I like to use is Archery for the +2 to mechanics and +2 charges to my beacons. 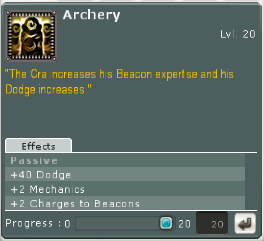 I’m the kind of person who likes to have tons of windy beacons on the field so that I can use them throughout the battle, especially in PvP. So all in all the extra mechanics help a ton and the +40 dodge at max although not amazing is still pretty nice.
The rest of your points I suggest just dumping into Riddled or whatever other passives you see that you might want to use but I’m not going to be going into those since I don’t have much experience with them myself.

The final passive that received a recent little buff was Disengage 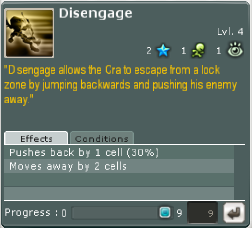 This can be extremely useful when you are out of wakfu points and need to get away quickly the one down side is I don’t recommend maxing it right away because there are to many passives/specialties that are much better than this at level 105 with everything that I wanted to max maxed I was able to get disengage to level 4 which seems to work out perfectly fine for me if you want you could lose a few levels on archery to max it but it’s entirely up to you.

Since I didn’t go over it in the passives section allow me to talk about riddling for a second.

With the recent changes to riddling I find it more useful for earth branch builds then air. While it is a minor nice little feature for cras it is not something that I myself plan on leveling. If you choose to level riddling however I suggest moving points off of bats eye and disengage to do so. Disengage at level 7 gains the 2 tile jump off leaving you with about 30 points to mess around with. Bats eye I use purely for situational instances during pvp.

Reach is something you might have noticed pop up while you’re shooting with riddling leveled. What does it do? What’s its purpose? To put it simply for air cras it does literally nothing. For earth cras reach determines how much riddled stacks will be taken when using spells that take riddled for extra damage. It’s to keep several cras from stacking riddled essentially making the earth cra a walking nuke.

One of the most used builds right now would be the double storm and a plague arrow build
To do this you need 10 AP and at least 4 MP you can aim for 5 MP if you wish to have an extra MP to move with. To achieve this you will need to get an AP set, A maka weapon preferably makacards and an AP amulet like shadowed amulet or white crow amulet. Stat wise you will need to stat at least 1 AP and the optional MP. The rest of your points are a personal preference some prefer crit some prefer agility hell some might even want a range point. I prefer agility to get high damage percents easier but crit is equally as efficient if you like to pvp. 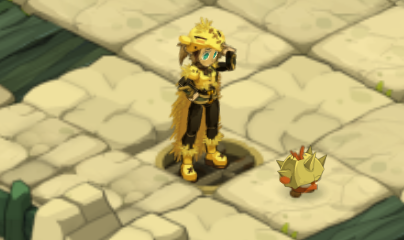 So you’v landed down from astrub and are wondering where to begin? I’ll go over where to level in the beginning specifically where to level while getting gear for your element. 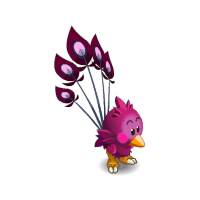 For a budding air cra fresh out of astrub Purple Piwis are going to be your best friends destroy them, hunt them, farm them get their gear while at the same time getting stronger this will get you a Purple Piwi Set, another option to go with this is the Purple Goo Goo Set that drops from Purple GooGoos which tend to be found around the piwis 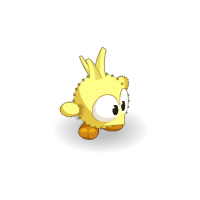 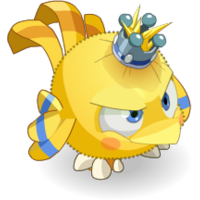 You’re casting double storm arrows dropping monsters left and right you probably dropped plenty of tofu house keys while farming those tofus try the tofu dungeon! The boss will drop a really great set called the Royal Tofu Set this will still give you an MP bonus but will give you more air damage

It may seem boring but soloing three pistes for a while is going to give some hefty experience not to mention plenty of ghostoplasm to sell for some extra kamas since its a very popular material. There’s really not much else I can say about this part so I think we’re gonna move on to the next part. 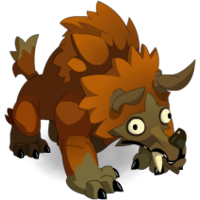 Boowolves are a very popular option that you could easily find a group in once you have gotten your complete crobak set and are feeling more confident you probably won’t need their drops but you can sell the materials that are used in Moowolf Set crafts for a decent amount.

Whisperers while near impossible to solo unless you’re really good are almost ALWAYS packed with groups, give GREAT exp and amazing air damage gear drops. They drop the Whispering Set which is a great air damage set which also adds an AP which if you plan on going for 10 AP is going to come in really handy for the future. From here on out it’s pretty much just whisperers even after 100 so get comfortable. 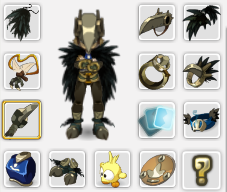 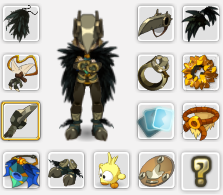 So you’re finally 110 and got your full whispered set. You’re left wondering what is there left to do? Well that’s where Ultimate bosses and Player versus player combat comes into play. Now I won’t go into Ultimate bosses that much since it’s not specifically about air cras but i’ll try and explain the gear I use for both this gear isn’t mandatory it’s just a guideline to sorta lead you towards what you should try and do. Also keep in mind that my gear isn’t exactly “the norm” I tend to wear what gives me the best bonuses out of things that I can afford.

Now when it comes to pvp the first thing that comes to mind is probably initiative I mean you wanna go before your opponent don’t you? That’s where your whispered set is going to come into play. Whispered gives a TON of initiative and will help you out greatly in going before your enemy. But while initiative is nice I still recommend using a damage Tofu or Moofly over an angora bow meow.

Now for Pvm one of the most important things is damage. Most end game monsters and bosses will have ridiculous resists this can be a problem as unless you have a certain amount above theirs you won’t be doing much damage. You will want to try and pick gear that allows you to break their resists and help your team out the best you can. Whispered is still nice for this I used whispered in pvm for a very long time and only recently got my pvm set finished.

Now onto my gear like I said before this gear is not mandatory it is just to help you have a guideline of what to aim for.