Why hello there my young lads,

So, I’ve recently rerolled from crusader to guardian since the change in the skill of guardian force (egg shell) came to cDN. Now that they made it so guardian force can be permanently used and had its durability significantly increased, I was interested as how different it would be to have that skill in DDN. Now the problem was the gears. Guardian is mainly a physical class and a crusader is magic/light based class. So I decided to just simply stick with the gears I have and become what I call a Magic Guardian.
This guide is for PvE only. Since I do not know if there are any other Magic Guardians out there and already there aren’t many Guardians, they may be some flaws to this guide as this is a completely new concept for me and this is purely based on my experience and experimentations

Since these two are both magic/light based they’re similar but I will point out the differences. In terms of DPS, it’s obvious that Guardian will not be able to dish more DPS than a crusader. Goddess relic EX is far superior to the non-EX one. I noticed that the non-EX does about ~65% damage of the EX. Also, the AoE is greatly reduced, so I find myself trying to position my character properly so the relic would hit. Crusader also has Judgement Hammer which is replaced by Justice Crash. Justice crash has over 2x the cooldown of judgement hammer and because of that I find myself using Sacred Hammering (left-click) a lot more. There’s also Lightning Charger EX, which has a greater frontal AoE but is narrower. I don’t feel that the non-EX is that much weaker because I think this skill is more efficient against a group of mobs rather than a single large boss. But I’m not sure, I don’t really pay attention to the damage I do with the skill. As for charge volt and smite, it’s still pretty much the same (until smite EX! I wanted to try the skill ;_;)

Another thing is that Divine Avatar is more of a Crusader’s ultimate rather than a Guardian’s even if it’s technically the Guardian’s. Crusaders benefit more from the buff because they get  an increase in intellect, but also an increase in strength which can increase even more the magic attack with Judge Power. Magic Guardian can only benefit from the intellect increase. It can also be bad to use for a Guardian due to the fact that you cannot collect more Guardian Bubbles under Divine Avatar. So you might lose your guardian bubbles and not be able to use Guardian Force until you collect it back.

New Hybrid DPS/Tank build for 70 cap. Making a 70 cap build is pretty tight. Not a lot of SPs to deal with and a lot of skills to level and get the new EX skill. 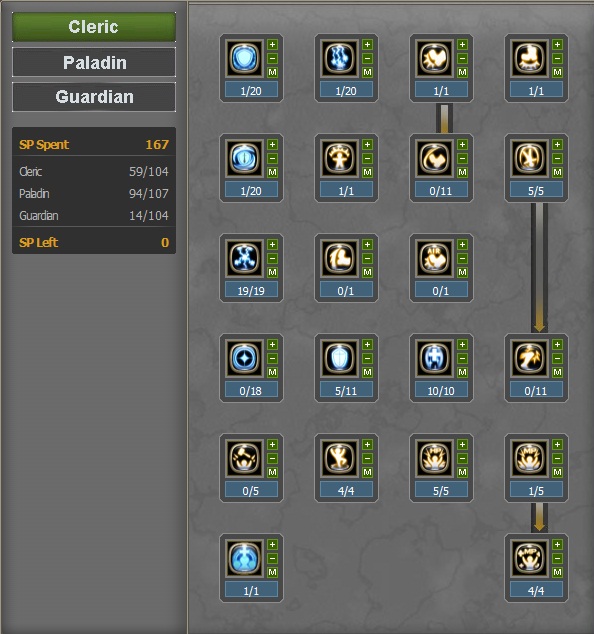 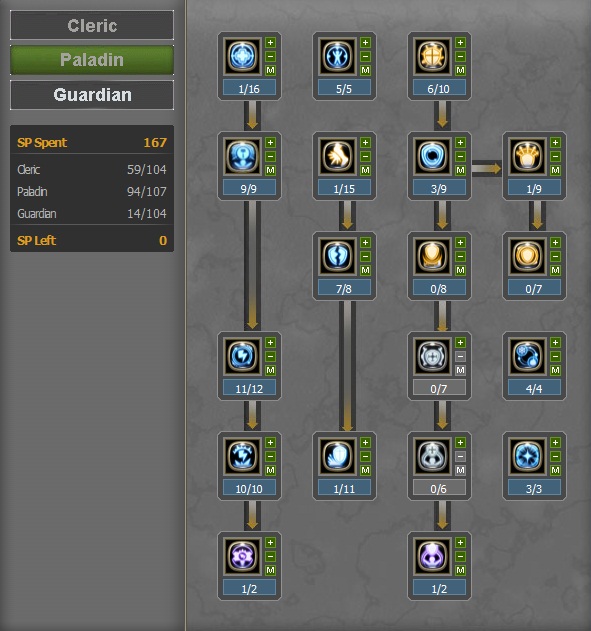 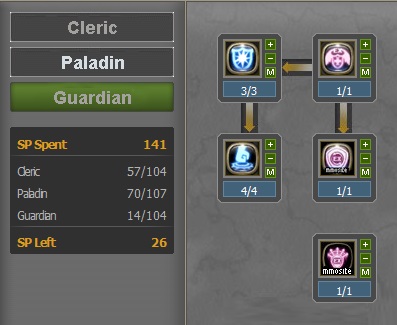 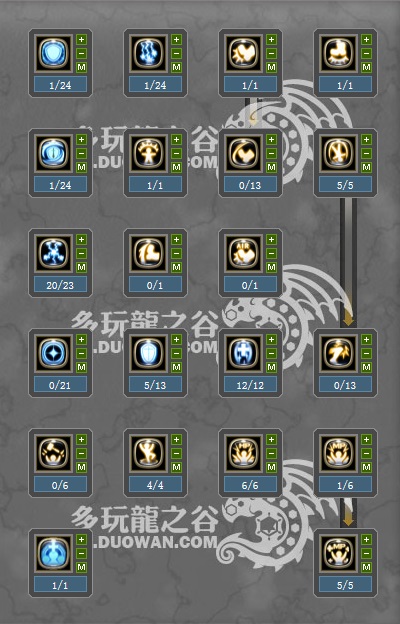 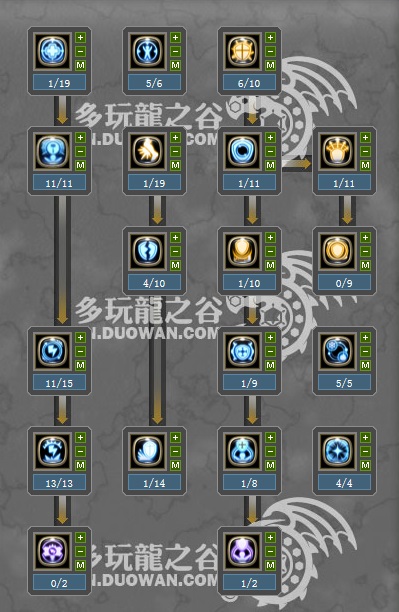 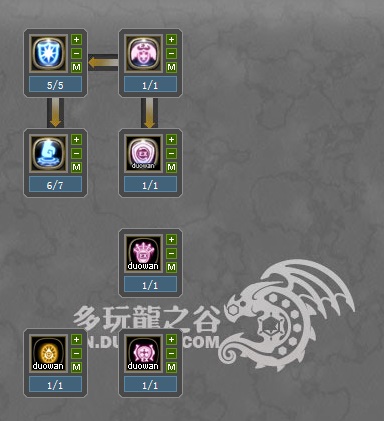 -Good way to get off the ground

-Very powerful DPS Skill, good skill to help DPS with your party. I put it at lvl 20 because i have the cash weapon +1 skill, which makes at lvl 21. Not worth maxing, need to save all the SP you can

-Gotta learn to dodge, can’t tank everything. As for AE, can be chained with justice crash

-Save some SP by dropping this.

-For max MP, magic guardian stacks intellect so…
-Max HP, I would max it
-MP Regen, max it for raids since you’ll permanently have aura on

-I feel that goddess relic is really lacking in DPS and is not worth maxing. Single hit, small AoE and slow growth is not a great skill

-You can put this a lvl 4 if you want, but i want it to put it at lvl 5 just to really have a safe zone in case things happen

-Leave it at pre-requirement lvl to learn EX, pointless and barely any difference compared to max anyways

-WOW. Lvl 11 sacred hammering now. WOW! The damage is so much better now. My numbers literally doubled. I love this skill now

-I decided to save some SPs by putting this at lvl 1. I only really use it to get more counters, so 9 secs is long enough for me

-Light-attribute skill, so it’s good for me. Don’t have any spare points to level it any higher

-Saved some SPs here also(Yeah had to saved SPs in a lot of places). I kept it at lvl 4 which will make the debuff last as long as the cooldown of the skill, at the minimum requirement basically

-Not a reliable skill. Too random and not like you really jump when you try to dodge a powerful attack. Need to put a point in it to access divine punishment though

-Kept it at lvl 11, it’s not worth maxing unless you use skill ring +1 to it which will make it lvl 16. But i don’t have the SP for it anyways

-Get it to have the EX

-Good if you have an elemantalist or alchemist in your party. Also good against bosses that has fire/ice attacks. It’s also helpful to get out of sand bind(the one where you spam A+D) much faster, so recommended to max

-Utility use only for me I don’t consider this as DPS. Has damage reduction when casting it so it helps tank

-So it was between this skill or divine hammer to get Divine Avatar. I though i might as well take this, i don’t use divine hammer much

-Increase your DPS. Also good if you have an inquisitor or crusader in your party (I don’t like partying with other paladins)

-I didn’t use it much when i had it, so i dropped it

-Never met a paladin without this skill

-Need it to be able to use Guardian Force

-The more skills the merrier, even though this is physical based skill still does some decent damage I guess. Leveling at 6 is high enough, don’t need to put it at 7.

-I know it converts it to a physical based skill, but it looks cool and I don’t use this to dps anyways

-I got rid of aerial block to put 1 SP into it and i think it’s pretty nice. Didn’t even knew it was light-based so even better. I know this is a good DPS skill, i never got to test the max level of it and always had it at lvl 1. Already at lvl 1 i find this skill to be very good, so if u really want to max this you can try to save some SPs elsewhere.

-The base skill of this should not be maxed as it does not make any difference for the damage it deals(The EX damage, not the base skill one). All the base skill does is reflect damage, which means you need to get hit to do damage(non-EX) and i don’t think you would want to do that. This skill is really based on personnel preference if you want it or not. For me, i like it and i think it would work really great to use it while you do sacred hammering when you run out of skills to use.

There is about ~38 hits from the skill. It does it about every 0.5 seconds. Mine does an average of 25k ticks when it crits which is pretty good to use with sacred hammering like i said before.
UPDATE: So i forgot about the fact of using this skill in a party with a priest and i gotta say it’s pretty damn good. I went to professor K normal with a priest and mercenary and hotdamn nice damage. I did like 60k+ ticks. Nevermind what I said before, you should get this skill it’s so sexy and cool *-*

Are you not a mercenary? Tired of getting interrupted all the time? Don’t like taking naps on the floor? Well here’s a great deal! Party with a Guardian and you will be able to DPS without any interruption! Receive SA equivalent to Iron Skin by the Guardian! And did I mention that it’s FREE? That’s right! Receive Egg Shell on your character and it will have high SA that will last up to 20 seconds!
Note: Guardians are not held responsible for the death of your character.
Side effects include: Overjoyement, button mashing, loss of care of getting hit & possible HP lost.
But seriously, this skill is really imba. The durability of it is incredibly high. The skill also has been changed to a light-based skill. When I did typhoon hell, at the boss I didn’t make to the protection ogre when the boss did lightning AoE, so I did guardian force and I survived AND the shell was still there. This is a new age for us Guardians! We will not be kicked in public parties anymore because our lack of support. We shall rise and we shall protect all characters that are in the world of Dragon Nest.

So as I promised, i will show you guys my gears. I’ve finally gotten the 50L Flail and got it with a pub pt, who would of though? 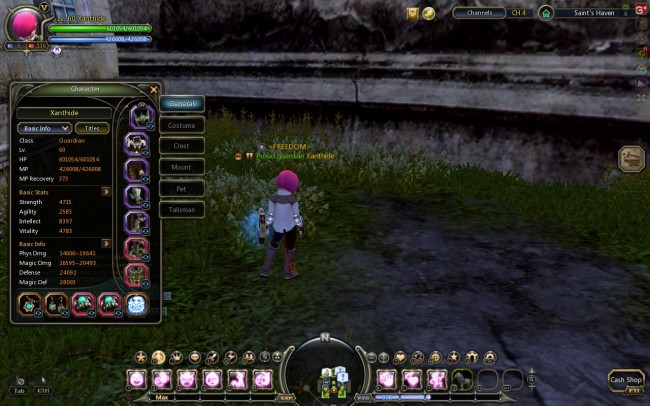 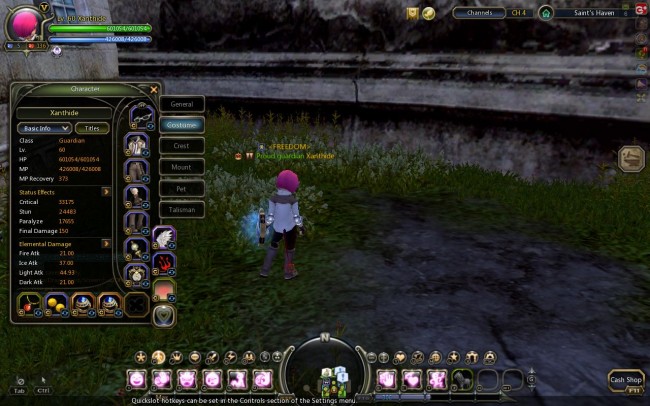 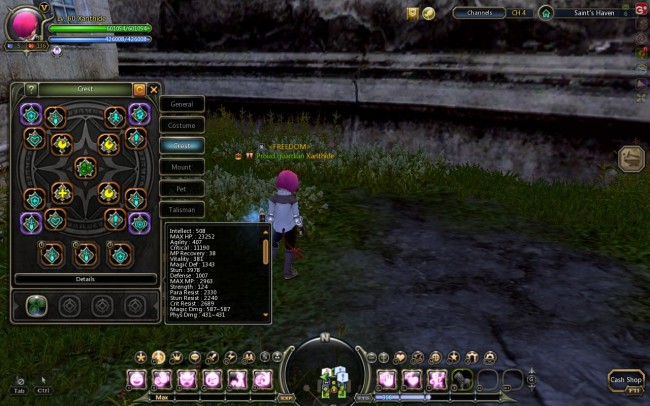 Without blessing stone buff, my magic damage is nearly 20k

My impression on Physical Guardian

So i got to try a Physical Guardian on North American Dragon Nest since they now have the revamp of Guardian Force. I can pretty much say that Physical Guardian’s DPS is lower than Magic Guardian even though my Guardian on NA isn’t well geared for DPS. It’s just the attack skills it has is less and not that great. A kick guardian isn’t very strong with its kicks… Roundhouse kick got nerfed in T4 and you can’t attack very fast if we have to use Holy Kick… You have justice crash to replace lets say Goddess Relic but the cooldown is high. And JC isn’t that bad for me on my Magic Guardian. You also lose Charge Volt which to me is a very high dps skill and I love this skill. Low CD and multiple hits while decreasing light resist. And I rather Sacred Hammering than using kicks, it inflicts more hit in a shorter amount of time. Kicks consume A LOT of MP in raids which isn’t good for solos neither. Also you have to sacrifice Skill Crest slots to get action speed kicks… Well, there goes 2 skills slots. I think if you want to have some DPS on a Physical Guardian, better go Magical.