Compiled a list of common acronyms you might see and hear in game, written for English audience with foreign info as appropriate..
PM me if I missed any.
Translations welcome!

GJ     Gaijin (could also mean Good Job if used alone, during game chat and such)

MM   Match Maker, the system that groups players from various servers into a game.

** This acronyms is based on native saying of the forces, if not correct way to present please let me know.

Cannon  Anything 15mm and bigger

Major classes for munitions (combinations of below possible, except for Ball):
HE      High Explosive type (link is for fragmentation type), effect like a mini-grenade (fragmentation type uses fragments with the HE effect)
AP      Armored Piercing
I          Incendiary (fire causing), often added suffix with AP (less often with HE)
T        Tracer, has easily visible tail, but design is less likely to cause fire, often added suffix to another type
“Ball”   Simple solid round, a Bullet, replaced/updated with others (used because its cheap), often used for practice.

GP      General Purpose (less explosive fill), something in-between an HE and AP.

GJ     Gaijin Entertainment is the maker of WT and other games (do not confuse with Gaijin Games, totally different)
WT      War T… what was it now?
WoP     Wings of Prey precursor to WT.

WoL     WIngs of Luftwaffe add on to WoP, expanding to WT.

UI  (User Interface):
GE     Gold Eagles- Purchased with real money is the major currency that can be exchanged for SL, XP, CS, or special equipment.
SL      Silver Lions- Minor currency used to purchase all manner of items, from airplanes to upgrades to munitions.
XP      eXPeriance- earned to unlock next higher level of units (earned in game or can be purchased from GE).
CS      Crew Skill Experience, earned playing and applied to each crew slot, can be purchased from GE (different from XP).

AB       Arcade Battles (easy flight and DM model, use any or all aircraft in lineup)
HB       Historic Battles (realistic FM, DM, only 1 aircraft)
FRB     Full Real Battle (like HB, but cockpit view only, no markers on any aircraft, object.)

Alpha    Markers (airfields, buildings) with “A”

BnZ     Boom and Zoom, diving in, attacking target, fly away; used by less maneuverable but fast aircraft
TnB     Turn and Burn, turn with target until flaming mess; used by maneuverable aircraft.
TG      Tail Gunner, defensive gun on aircraft that have them (usually but not always refere to rear one).

RTB – Returning to base (if addressing someone else, add their name)
WT or WP – Way Point (path to follow)
IP – Initial Approach (point where bomber turns to target and starts run)

“o’clock”      simple method of indicating direction to object based on analog clock face laid over aircraft (see image at below).
High/Low    simple method to indicate height of object, often said with clock direction
666 (or any combination of 6)     EA behind someone (maybe YOU!), on their “6 o’clock position” 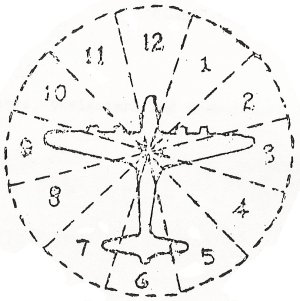