Let me start off by saying that I do not know every single thing about guardian fighters. I have not tried every single GF build, nor do I consider myself professional. I did this on my own time to present my thoughts and opinions about this class to encourage others to maximize their gaming experience.

With the upcoming patch, I took the liberty of testing all of the attributes on my guardian fighter. All the data was collected using the Neverwinter-Preview server. Gear was selected to boost each stat as high as possible, resulting in a range of values between 0 and 4000. Data was recorded in intervals of 75-100 (30-50 data points). The recorded percentages are directly from the stat bonus. Other modifiers that would eventually boost the final percentages were not taken into consideration. Again, the percentages shown are ONLY from the stat itself, nothing else!

The purpose for this data is to inform anyone with a guardian fighter how each stat performs. The following graphs illustrate which stat bonuses are better to stack, and when you hit diminishing returns.

NOTE: The percentages shown in the following graphs were taken from a guardian fighter ONLY. Diminishingreturns for other classes MAY BE DIFFERENT.

*Defense was given its own graph so it wouldn’t interfere with the other stats. Graph ends at 6000 defense since the diminishing returns are way too high to ever go higher than that amount.

NOTE ABOUT GRAPHS: All stat bonuses are roughly equivalent below 1000. Only after more stat bonus are introduced do you see any real differences between them. As you increase any stat bonus you start getting diminished returns. Graphs end at 4000 since there is NO rational reason to socket any stat higher than that on a GF.

WHEN DO DIMINISHING RETURNS KICK IN? 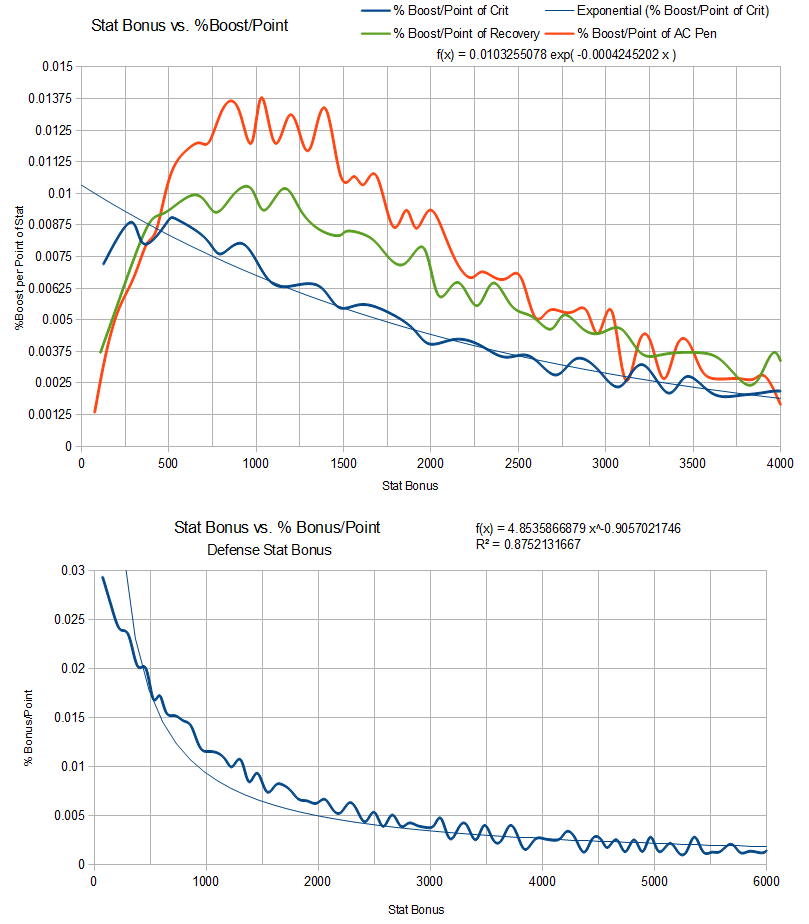 MY THOUGHTS ON THIS DATA

Critical Strike:
The observations made in the preview server lead me to believe that crit isn’t something that should be stacked over 1650. Anything past a 20% crit rate just goes to waste. On average, armor penetration will be 2-3 times better than crit. Just don’t ever go over 1650…
Armor Penetration:
Stack as much as you can. This IS the best offensive stat to stack. Returns will always be good, and it adds straight percent damage increase.
Recovery:
This stat has high return, but I wouldn’t focus on it. Armor penetration is much better for offense. Just get recovery from your weapon, shield, and armor. In my opinion it’s not even worth having on jewelry.
Defense:
The results I obtained also lead me to believe that anything over 3500 defense is wasted. 3500 Defense will give you 45% – 47.5% damage reduction, which is more than enough. The downside to defense is it’s vulnerability to armor penetration. Not worth stacking.
Deflect:
Any defensive slots should be socketed with deflect if you already have 3500 defense. The return for this stat is much greater than defense once your defense is above 3000. It’s quite easy for GF to get at least 20% deflect rate, which is basically 10% damage reduction on top of your 45%. This added 10% damage reduction cannot be reduced by an opponents armor pen, an added bonus. If you’re not running teneberous, stack as much as you can.

Just thought I’d share my results with the community…

I hope some of you can use this data to your advantage to help create your own GF builds. I would also like to hear feedback on my research, and encourage others to do something similar for other classes. If anyone is interested in viewing the spreadsheet data I used to make these charts check out the link below.

I didn’t know where else to upload it, so it’s on Google docs.