Hi all! I finally overcame my laziness and decided to describe my current build. It’s a “glass cannon” build for those, who can dodge red circles.

I use thaumaturge paragon path, cause it gives maximum stabile damage boost both for you and your party. Here is a screenshot of my feats. 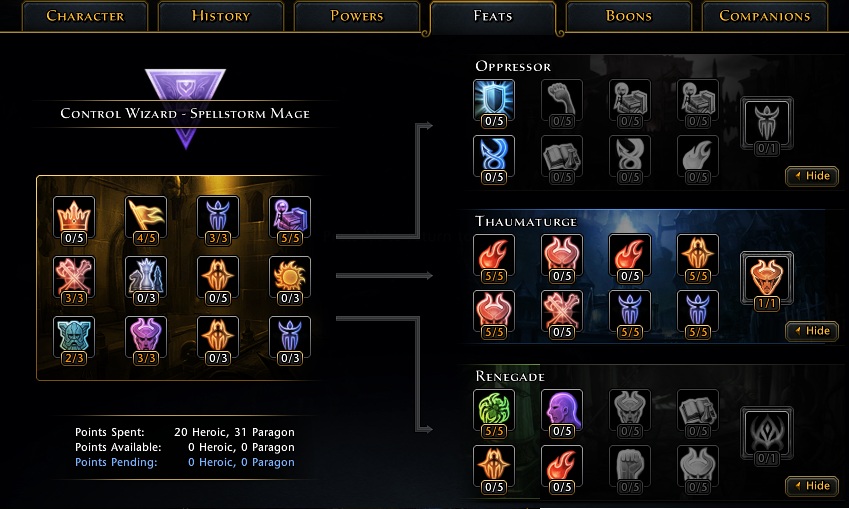 Toughness: 6% extra maximum hitpoints
Just a filler. But it better, than Controlling Action, believe me.

Tier 2
Fight On: Reduces your encounter cooldowns by 8%
Usefull feat, but there are not so much feat points to take all sweet feats.

Tier 3
Blighting Power: Your Cold powers deal an additional 9% extra damage to targets effected by chill.
One of the options of this build is full frost mage, so +9% damage from frost spells are really usefull. But if you want, you can switch it with Arcane Enchancement.

Tier 4
Learned Spellcaster: Increases the bonus damage intelligence provides by 5%
It’s near 6% damage boost for all your spells (depends of your INT).

For humans only. Take one of following
Focused Wizardry: Your area effect powers deal 9% more damage.
AoE damage increase for PvE.
Prestidigitation: You and your allies gain 3% increased Stat Ratings.
For PvP and party buffing.

Malevolent Surge: When you kill a foe you gain 10% more damage for each foe you kill. Stacks up to 3 times, lasts 4 seconds
Nice boost for you damage, when you kill enemies.

Tier 2
Nothing to do there.

Tier 3
Frozen Power Transfer: Chilling Cloud now grants 5% bonus damage for every target you strike with its third strike. (This bonus lasts for 8 seconds and is reset if you cast the third strike of chilling Cloud again)
Core damage increase for my build. Increases your damage up to 25%.

Elemental Empowerment: Your Cold Encounter Spells also deal 30% of your weapon damage over time to their target. Arcane Encounter Spells weaken a target’s defenses by 10% for 3 seconds.
Quite optional feat after Chilling Cloud fix, but increases your burst damage in PvP and increases AoE damage via 10% debuff. You can easily replace this with Destructive Wizardry (don’t forget to take Storm Pillar), Nightmare Wizardry from renegade or Bitter Cold from oppressor.

Final Feat
Assailing Force: Your Conduit of Ice power now reduces the Mitigation of affected targets by 15%
Core thaumaturge feat. Increases party damage for 15% on target and nearby 5 enemies.

Tier 1
Critical power: When you land a critical hit you gain 5% of your total action points. 10 second cooldown.
Very useful feat for tier 1 feats. Can give you up to 25% extra AP, when crits with AoE power. 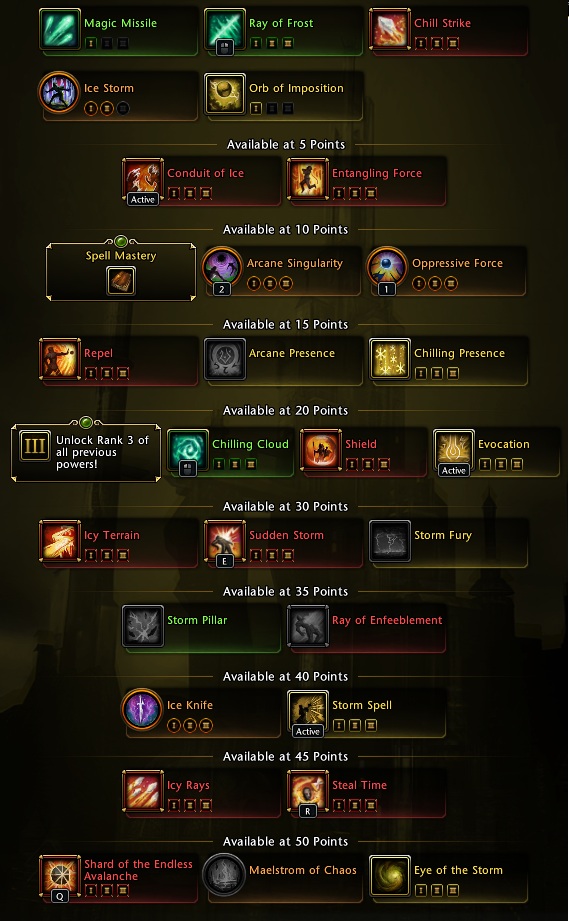 *you can take Ray of Enfeeblement instead of Shard, if you don’t want to use it and take one (or more) point from Icy Terrain to Storm Pillar for charging AP out of combat and Destructive Wizardry build.

High Vizier set is the only option of t2 sets. Gives a lot of damage boost to you and party. Effective both for PvE and PvP.
Stat priority:
Armor Penetration 24% (2540 rating)
Recovery ~3000 (easy to get: HV set and Ancient set of weapons gives A LOT of recovery)
Critical ~3000
Power

This build isn’t an absolute truth, it’s mostly a description of my playstyle. And sorry for my English, it’s not my native language. If you find some mistakes, please, PM me them.

Shield taken only for pushing stuff in plague or CN. If you won’t go there, feel free to max Ray of Frost, Ice Storm or Chilling Presence.