In any journey, it is always best to start at the beginning and work your way to the end. Well, in the case of the long journey to Throne Room know-how, there is no better place to start than with your troops.

Every day that you play, you train them…you reassign them…and, more than likely, you kill a few thousand off. But have you ever really stopped and taken a good look at your troops? Have you ever wondered why you have the assortment you do? Do you know what makes each one special?

Let’s face it folks…without troops, there would be no Kingdoms of Camelot. I couldn’t imagine spending hours sitting around just building buildings and doing research. If I wanted to do something like that, I would have played Farmville or any one of the many variations of it instead of KoC. But, with troops comes battle…and who doesn’t love a good bloody war from time to time?

I am not going to go through each troop type in this guide. I will write a more general KoC guide later on for that. What I will do is point out what the attributes (stats) are that make up your troops and determine how they fare on the battlefield. Knowing what all the stats actually do will help give you a better understanding as to how the Throne Room will alter them. After all, that is all the Throne Room really is…a machine to help you genetically alter your troops, like Gamma Rays turning Bruce Banner into the Incredible Hulk.

In this section, we will take a look at each stat and what it actually does for your troops. I will break each stat down to its simplest explanation and hopefully you will walk away with a better grasp on what makes each of your troops special in different situations. 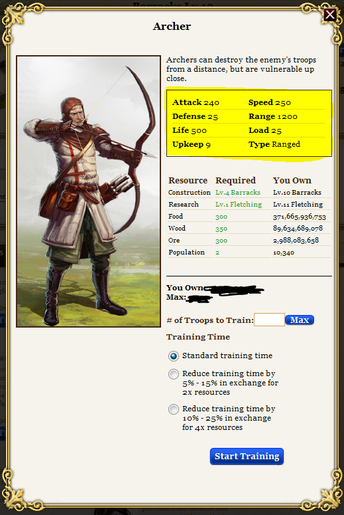 Every troop type in KoC has stats assigned to them. They can be viewed when you go into your barracks and click on them to train them. In Figure 1 we see our friend, the Archer:

You see the box highlighted in yellow? Those are the Archers’ stats. There are eight stats listed:

All of your offensive troops (the ones trained in the Barracks) will have these same set of stats listed, just with different values based on the troop you are looking at.

Defensive troops, such as Traps, Caltrops, Spiked Barriers etc., do not have an Upkeep, Load or Type stat, instead they have a Space stat denoting how many spaces it occupies on your walls.

So, let’s take a look at each stat and what it does:

1. ATTACK – this stat simply refers to the amount of
damage your troop does when it attacks. Anyone one that has ever played a RPG style game before like Final Fantasy or Dungeons & Dragons, should be all too familiar with the DAMAGE(DMG) stat. It’s the same thing.

2. DEFENSE – this is your troops’ ability to absorb damage they receive while being attacked. Consider it like their shield. If your enemy’s ATTACK is 100 and your DEFENSE is 25, it is basically like them hitting you with 75 ATTACK if you had 0 DEFENSE.

3. LIFE – in most video games, especially RPG style games, this is typically referred to as “Hit Points” or “HP”. It is the total amount of damage your troop can receive before they are considered dead.

4. UPKEEP – we all have to eat right? Well, your troops are no different and that is what this stat shows you. UPKEEP is how much food your troop will consume in 1 hour.

5. SPEED – this number refers to is how fast your troops move. In Monopoly, you roll a die and are allowed to move however many spaces according to what comes up on the die. Same concept here. Each troop has a set number of spaces they are allowed to move per turn.

6. RANGE – Range means how far away your troop can be from an enemy and still be able to attack. You always hear sportscasters talking about how a boxer has good range. Same thing here in KoC. If a boxer has 2’ long arms…then, he has a RANGE of 2’. If his opponent is 3’ away, it doesn’t make a whole lot of sense to throw a punch, as he will miss anyway.

7. LOAD – this is how many resources that specific troop can carry. Not a whole lot more explanation needed for that one. LOL

Now, what some folks don’t realize is that there is actually a 9th stat that is not listed in the Training Tool Tip, and that is ACCURACY.

So, what is ACCURACY?

Well, basically, ACCURACY is what is known as a “Troop Multiplier” and influences the effectiveness of your troops in battle. Every troop type has a different ACCURACY stat value based on what troop type it is attacking at the time. An Archers ACCURACY stat against Militiamen will be different than its ACCURACY stat against Cavalry. Confusing, isn’t it? Which is why, I suppose, Kabam did not add them to the tool tip…that and the fact that they would need to list 17 different values for each. (12 Offensive troops and 5 Defensive Units)

How does it work? Well…being a “troop modifier”, when the game is calculating damage caused by your troops to another…it doesn’t necessarily base it on the actual number of troops you sent…instead, it applies the ACCURACY to your troops and calculates damage from that number instead. Let me show you:

I know…the ACCURACY thing is a tad confusing…especially if you don’t know what all the values are for each unit, Offensive and Defensive.

The link above has a chart that contains a good portion of the values. I am working on the rest of them, but it is tedious and takes a bit of time…especially with the lesser troops like Supply Troops and Scouts. Trying to send the right amount of troops to get good numbers can be a little frustrating…but, as soon as I get them, I will share them with you all.