Kingdoms of Camelot Bonus and Debuff Caps by BadOmen

In their attempt to keep the forces of Good and Evil in balance, Kabam programmed some Bonus and Debuff Limits (or “caps”) into the game…to keep anyone from getting completely ridiculous. And…for your viewing pleasure…here they are: 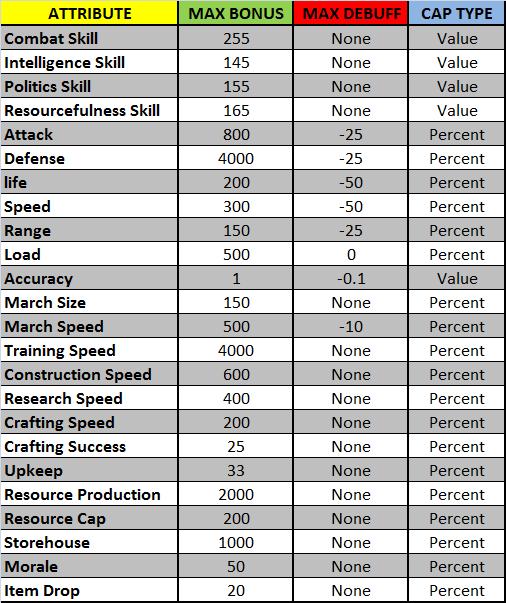 Okay, so now that you know the caps, we can move on right? No? What’s that…you want to know what that all means? Damn…you people are demanding! ;)

Alright, I suppose you do need to know a little bit more about these…so, here we go.

I am pretty sure you can all figure out what the “Attribute” column is all about…but, just in case you are still bewildered by all those words and numbers…Attribute just means the skill that we are dealing with, whether that is Attack or Crafting Speed. Let’s move on…

MAX BONUS refers to the Maximum amount of bonus you can add to your BASE stat using the Throne Room. HOWEVER, all of the caps are what I refer to as “Floating Caps” because they rely on what your opponent has in their Throne Room as well. Confused? Don’t be…I’ll show you using the infamous Range stat and a random BASE stat of 100.

So, you have a 200% Range Bonus in your Throne Room? AWESOME! And, I suppose you think your troops that started with a BASE Range stat of 100, now have a Range of 300, right? Not exactly .

If you attack another player who has no Throne Room at all, the Max Bonus cap for Range drops your Bonus to 150%…so that 100 BASE Range troop is only at 250 Range, not 300.

That same opponent has decided to get his butt in gear and has amassed a Range Debuff of 100%. Now, when you attack him…his Debuff reduces your 200% Bonus to a mere 100%. Ummm…what does that mean? You ask…That means that you can add on another 50% Range Bonus before you are at your Max Bonus Cap. Make sense? Kind of? Sort of? Maybe?

MAX DEBUFF means the most you can reduce their BASE stat by. Those numbers all look pretty low don’t they? Don’t worry…they are that way for a reason. Remember, all the caps are figured off a troop’s BASE STATS (the ones you see when you click on them to train them in your barracks) BEFORE all the other bonuses such as Research, Knight and Shop Items are applied.

It really wouldn’t make much sense if you could Debuff a troop to “0” Life, Attack, Defense…or any other stat that is concerned. In order to maintain some balance, they eliminated the ability to essentially turn another player’s troops into an army of quadriplegics.

So, using the same random BASE Stat of 100 from before…let’s take a look at how the Debuff Caps figure into the equation shall we?

Being the mighty warrior that you are…you have enhanced and upgraded your little heart out to get that intimidating Range Debuff of -200%…Congratulations Conan! But wait…there is a -25 Max Debuff Cap right? So, unless your opponent has Range Bonuses in their Throne Room, that once impressive 200% Debuff has been reduced to a meek and timid -25%. So, the lowest that their Base Stat of 100 will ever go is 75 (100 – 25%).

Well damn! All that Enhancing and Upgrading you did was just a waste of time and Aetherstone! Thanks a lot Kabam!

Just a minute there skippy…not so fast.

What happens when that opponent wins the lottery and devotes all his time and money to getting his Range Bonus to an emasculating 500%???

Your 200% Range Debuff reduces their Bonus to a still-impressive 300%, which means that you can still technically add on another 325% before you reach your limit (300 to counter their remaining Bonus plus an additional 25% for the cap).

It can be a little confusing at first, which is why I would venture to guess Kabam would not post these in the forums…to try and save themselves the hassle of trying to explain it over and over again amidst all the other junk posts and people offering other, incorrect explanations.

You also see that some of the attributes have “none” listed under the Max Debuff column. Look at those…these have no Debuff Cap because debuffs don’t exist for them…mainly because there really is no way to use a debuff on them.

CAP TYPE is the last column and tells you whether the cap is figured as a percentage of the Base Stat, or has a set numerical value.

If it is a “percentage” cap, then that is the max percentage you can increase or reduce the Base Stat by. For a Base Stat of 100, and not considering any other information…you would have a Range of 250 (150% cap) and a minimum Range of 75 (-25% cap).

The main thing you have to remember is that the caps on your stats are directly related to what your opponent has in their Throne Room. Don’t stop Enhancing/Upgrading an item just because you reached the caps listed above…because they could be made completely useless by the next person’s Throne Room.