Cards are the medium in which Hearthstone is played with. Almost everything in the game is represented by a card, whether it is Abilities, Minions, Weapons, Heroes, or Hero Powers. Cards are brought into play through various methods, all of which will be demonstrated below.

Ability Cards, or Spell Cards as some players call them, are cards which are not put directly into play but when played from your hand, will make changes to the game. Abilities range from allowing yourself to draw a card, to buffing your minions, or dealing incredible damage to your foes. Ability Cards are class specific, with the exception of some cards which insert abilities into the game, such as King Mukla, who gives your opponent Bananas.

Be sure to check out our complete collection of ability cards!

Minions are summoned into play using Mana from your Mana Pool. Once brought into play they will have Summoning Sickness and be unable to attack until your next turn. Minions have both offensive (Attack) and defensive (Health) stats. Once a minion’s Health reaches zero, it is removed from play and placed in to the Graveyard.

Minions may be class specific like the Ethereal Arcanist (Mage only), or neutral like Deathwing (Everyone can use him!).

Although in Warcraft Lore, minions may be associated with a faction, in Hearthstone for the sake of gameplay, factions are irrelevant. Both Horde and Alliance minions may coexist within your deck. Hugs for everybody! Except the Trolls. Ugh, those feet..

For a full listing of Minions, we’ve got you covered. Make use of our powerful filters to narrow down your results.

Weapon Cards are class specific cards which are equipped to your hero. Your hero may only wield one weapon at a time. Equipping your hero with a weapon will allow him or her to send out devastating attacks against your enemies to knock them to the ground. Weapons attributes are like Minions, except instead of having Health, they have Durability. Durability is lost each time you make use of your weapon, which means you are only able to attack with a weapon for each point of Durability you have. When a weapon runs out of durability, it is removed from play and placed in your graveyard.

Using Sword of Justice, a Paladin weapon, as an example, You may attack with the weapon a total of five times, each attack will deal one damage to its target. Sword of Justice has an additional effect though, which forces it to lose durability each time you summon a minion while it is in play, but at the cost of one durability. Sword of Justice is unique in this regard and can be used to buff your minions instead of attacking your opponent.

Check out our database to see all of the different weapons in the Hearthstone arsenal.

You’ll be able to build a deck based on one of nine epic Warcraft heroes, each representing one of the original World of Warcraft classes: Druid, Hunter, Mage, Paladin, Priest, Rogue, Shaman, Warlock, and Warrior.

Each Hero has a Hero Power that can be used for 2 mana, once per turn.  Hero Powers may be used on enemy or friendly characters, unless otherwise stated on the Hero Power (i.e. Rexxar is limited to enemy Hero). Hero Powers which summon a Minion onto the board will always summon the minion to the right of the furthest right friendly minion on the battlefield.

The following is a table of Heroes and their Hero Powers. 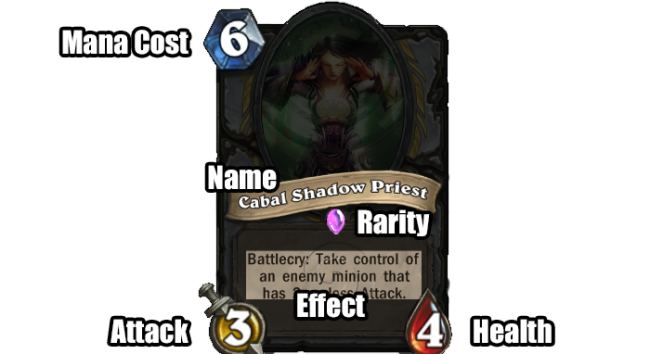 Mana Cost
Every card has a mana cost associated with playing it.  This mana cost is represented by the number in the blue crystal on the upper left of the card.  Players start with 0 mana and gain 1 mana at the beginning of their turn.  Players may only play cards from their hand into the battlefield during their turn, not on their opponent’s turn.

Attack
The amount of damage you do when you attack.

Health
The amount of damage you can take before dying. When this reaches zero, you’re dead!

Durability
The amount of swings you can take with your weapon.

Effect / Description Text
The text of any card, as well as the Hero Abilities, indicate the effect of that card or power.  To understand how the impact of a card’s text, it is useful to understand some other terms used by Hearthstone to describe minions and the players:

Unless otherwise indicated, the stated effect exists as long as the card is in play.

Basic cards are the “starter” cards that form the foundation of each hero’s class, and are earned each time you play a game (you can have up to two of every basic card in the game in your collection).

Expert cards are cards that can only be found in card packs or created using the crafting system (certain achievements grant them as well). They’re distinguished by their rarity—common (white), rare (blue), epic (purple), or legendary (orange). Generally, the rarer a card is, the more complex it is . . . often providing you with new strategic options. You can have any number of expert cards in your collection, though only two of any common, rare, or epic card, and one of any legendary card, can be placed in a deck.

Both basic and expert cards have important roles to play in all decks, regardless of whether you’re just starting out or are a Hearthstone grandmaster.

Players will earn their first set of cards as soon as they start playing Hearthstone, and certain game modes and features will award additional cards through gameplay. In addition, players will have the option to purchase additional card packs through the in-game store using Battle.net Balance or other supported payment methods, such as major credit cards. Here are the different ways to get cards:

Unlike other games, combat and spells are not resolved in phases.  Instead, each action taken by a player is immediately resolved and then the player can take further actions.  For example, if you want to attack with three minions, you attack with each minion one at a time, resolve that attack and then move to the next minion.  As the attacker, you usually choose the target.  Friendly minions/Heroes cannot attack other friendly minions (but a Hero may be able to use its Hero Ability on friendly minions).