Gearing in Marvel Heroes is a lot different than most other MMO’s, so it can lead some to be confused about what the best way to gear their character. Here I’m going to break it down so that you can make informed decisions about if a green is better than a blue and reach your maximum potential.

The first thing you need to know is what stats are and what powers (skills) are. Stats are divided among 6 different classes and come in 7 ranks per stat. Here is how it looks in game: 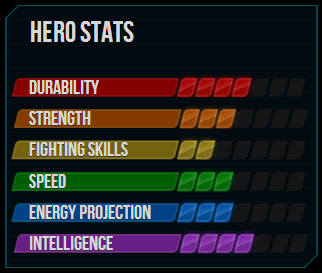 Each stat contributes to some aspect of how your character plays, from speed making you move faster, to intelligence making you gain more XP. Stats play a vital role in everything you do.

Here is where things get tricky, unlike most common MMO’s and ARPG’s you have almost no way to affect your stats. There is no +1 Strength shield for Captain America, no +1 intelligence on Hulk pant’s and so on. Stats are pretty much there as is and you get certain increases based on character level. Now I said ALMOST no way to affect them, there is a way to add cores to costumes once your Crafter reaches level 10. The cores come from drops and specific cores go to specific characters. For now I wouldn’t worry about Stats to much.

Skills (powers) on the other hand you have direct control over at all times (you have the POWAH!). These are the things your putting points into every time you level. These are what your gear is going to affect, and this is where your going to start looking to min-max your character.

Let’s jump back a bit and talk about more general gearing. Gear comes in various colors, shapes and sizes. Each character has 4 pieces of “armor” 1 “weapon” 2 artifacts and a medal slot. Armor has + defense on it weapons have + damage, so pretty simple to figure out which is which. Gear comes in 5 colors grey,white, green, blue, and purple. The exceptions are artifacts which are only orange and Medals which come in medal and medallion form. Rarity just gives you more bonuses per piece of gear.

So in most cases Purples will always be better than greens, but there are times when that wont be true. So how do you figure that out? First you most know your character, and how you want to play them.

Here Is hopefully, all the bonuses you can find on gear:

Weapons
XX% Defense Penetration when you use a basic power
XX% to do X% of targets life as damage when you use a basic power
+X to X damage Type (Physical, Mental, Energy)
XX% chance to freeze target when using a basic power
XX% Chance to cause your target to Bleed for XX damage
XX% Chance to Burn your target for XX damage
+XX Spirit when you hit with a basic attack
+XX Spirit when you defeat an enemy
+XX Health when you defeat an enemy
+XX% to attack Speed
+XX% to attack Speed(Specific Power Tree)

Wow there is a lot of modifiers, and I’m sure I’ve missed a few, that at least gives you a working knowledge of what you can expect. So now we come to the big question, What do I want?

Okay so this is what you’re here for, what gear do I want. This is my opinion and thus may be wrong but this is whats worked best for me.

1) Unless your dying in 1 to 2 hits ignore all defense stats, With the exception of Health Regen. Don’t go out of your way to get it, if its on gear great, otherwise look for something else. I say this because It does add up over the course of long boss fights.
2) From 1-10 find gear with +XX to Power for your basic power. This is because you don’t have a lot of skills to use so your basic power will be doing the most damage. The +X to power level provides more damage Than +X to damage in almost all cases. Beyond level 10 things get more complicated.
3) +X% to attack speed is always a good stat, if affects almost all your skills so a piece of gear with this is generally better than one without.
4) Don’t worry about +Item find and +Rarity the gear will come no matter what, and you’ll be leveling so fast that a purple level 2 item could be passed by a green level 5 item.
5)+XX to Power does not count towards Synergies. Synergies are when a power gains bonuses (normally damage) from points in a previous power. Only Hard points (points you’ve actively spent) count towards synergies, this is why level 10+ gearing becomes more complicated as this is when most characters get their level 2 Basic power.
6) Levels 10+ find the skill that does the most consistent damage and pump that up as much as possible. Use +X to Power items, +XX% to attack speed and +XX to damage type (you can find out damage type of a skill by hovering over it) 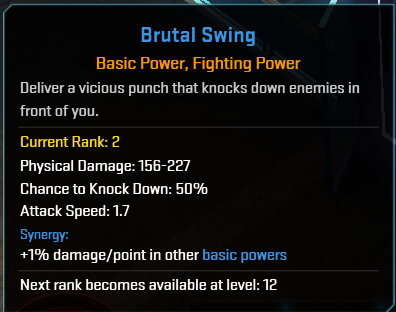 7) Give X (Power Name) at X Rank is good for getting skills early and can be used to get an ability without having to points in it. This works well with passives. 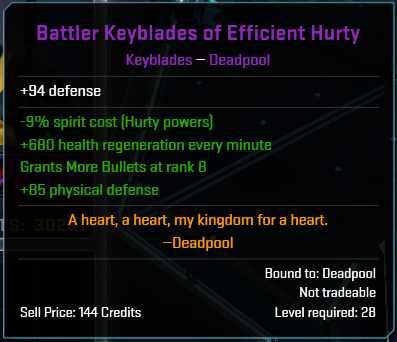 8)+X to Power only works if you’ve invested points in said power (there is a bug that sometimes makes it so it will give you the +X to that power even if you don’t have points in it but this is how its suppose to work)
9)Hard Points and +X to Power does not stack with Give X Power at X Rank, you get whatever is higher.
10) Finally to reiterate what number 6 says, the key to doing the most damage is to focus. Focus on one tree and the grab powers that do the most damage and gear that boosts said damage.

Every character plays different, some you want to focus on basic powers that are augmented by active powers (Deadpool is one of them). To these characters stats that buff basic powers (Armor pen, %heath damage, etc) would be far stronger than say, Iron Man, who uses active powers as primary damage and only use basic powers as a filler. So knowing your own strengths and weaknesses will play a large role and what bonuses to look for.

Lastly are Medals/Medallions and Artifacts. Pretty much you want to look for the ones that are most beneficial to your play style. These are highly Hero dependent so use your own discretion, like + damage to range abilities does Thing little good, but is amazing for Hawkeye.

So There you have it, a working knowledge of how to gear on your quest to endgame. Even in the 30+ world a lot of this holds true, so feel free to take this and expand upon it. The final piece of advise I can give you is level up your crafter by donating (Hold ALT key when selling to vendor) This will allow you to upgrade Blue gear to Purple gear and convert Purple gear for other Heroes to your hero. This will lead to many more gearing options.