Hey guys it’s Ash, and many of you guys here have been having problems with stopping the Hog Rider and Freeze Spell, so I created this guide to help you get a better understanding of how to counter these threats.

The rule of thumb with the Hog Rider is, whenever your opponent sends in a Hog Rider, always be prepared against a possible Freeze Spell. One of the biggest reasons why players struggle against the Hog Freeze combo is because they do not carry a building in their deck. Carrying at least 1 building card is necessary for defending against not only Hog Riders, but also threats such as the Mortar, X-Bow, Balloon, Golem, and many other threats that would otherwise directly target your Arena Towers. These buildings include, Inferno Tower, Goblin Hut, Tombstone, Bomb Tower, Barbarian Hut, Cannon, Tesla, or even the Elixir Collector are all good buildings to block incoming Hog Riders. 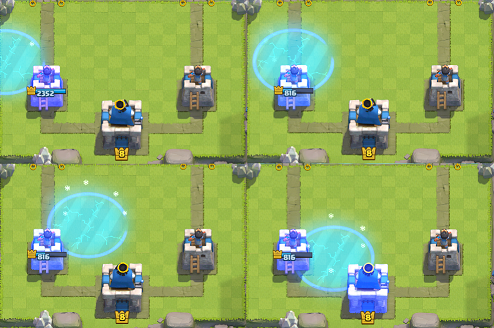 Now first, let’s discuss the radius of the Freeze Spell. The Freeze Spell has a radius of 3 tiles, so I’ve outlined the area that a Freeze Spell can be used to freeze both the Arena Tower and your troops or buildings at the same time. So what this means is, you must avoid deploying your troops away from this area. Especially your ranged attackers such as Archers, Musketeer, Witch, Spear Goblins, Wizard, must all be deployed away from this region! 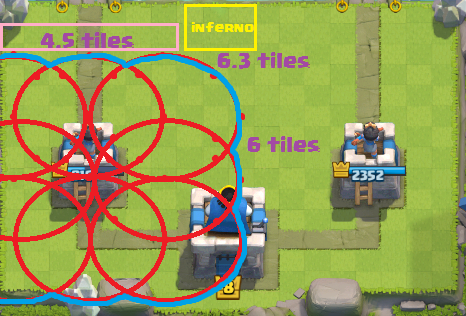 So looking at picture, you can see that the best place to deploy your troops whenever you see a Hog Rider is up top. The Freeze Spell is unable to freeze both the Arena Tower and the top two tiles of your side of the map. And as you can see, I have denoted this region within a pink rectangle, denoting that the distance from this region to the Arena Tower is 4.5 tiles apart. So this allows all your long ranged attackers, your Archers, Musketeer, Spear Goblins, Wizard, and so on, allowing them to target the Hog Rider without having both your troops and Tower frozen at the same time. This is the “sweet spot” for deploying your troops whenever you come across a Hog Rider. I’ve also drawn where you should deploy your Inferno Tower to avoid getting it frozen with your Arena Tower as well. 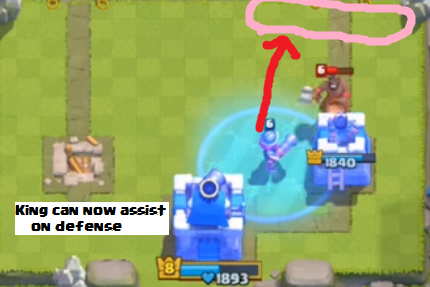 Musketeer (along with other ranged attackers) does more damage than King’s Tower or Arena Tower, so keep her at a distance from your towers to avoid Freeze.

Another thing to keep in mind is when one of your Arena Towers are destroyed, it actually becomes easier to counter Hog Freeze. How you say? Well when one of your Arena Towers are destroyed, your King’s Tower is activated and will help assist you on defense. This means that you must avoid deploying at the area in the middle of your King’s Tower and second Arena Tower! I just love when I’m using the Hog Rider and Freeze Spell and someone deploys their troops in the middle of both their towers, allowing my Hog Rider to quickly take down another tower and secure myself myself of a victory. This is a major error guys.

The “sweet spot” for placing down buildings: 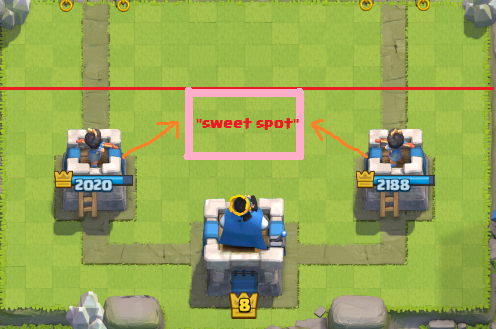 Now let’s talk about building placement. Placing down your building properly is also very important. Usually the best place to place any building is inside this region. Placing any building inside here will allow both your Arena Towers to target the Hog Rider, and also prevent the Hog Rider from directly targeting your Arena Tower. However, it does not protect the building from a Freeze Spell. A Freeze Spell can still freeze both your building and Arena Tower at the same time.

Another very important thing to note is that you should never deploy everything at once when dealing with a Hog Rider. For example, I see attackers just outright deploy everything from their hand just to stop a Hog Rider from targeting their building. They send out their Goblins and Mini Pekka and clump them together next to their Arena Tower. This is a huge error. Because the attacker can not only freeze your Mini Pekka and Goblins and Arena Tower at the same time, but since you’ve also spent all your Elixir and counters to stop the Hog Rider immediately, you’ll have no way to retaliate. Instead you’ll just spend the next 5 or more seconds watching the Hog Rider banging on your Arena Tower. So what you should have done is not only deploy your troops away from danger zone, but you also should have only deployed one troop card at a time. For example, all you needed were the 2 Elixir Goblins to stop the Hog Rider. It doesn’t matter if the Hog Rider damages your Arena Tower, by using the 2 Elixir Goblins to kill the Hog Rider, you’ve profited by 2 Elixir, which is worth a lot more than the small damage dealt by the Hog Rider.