Hello summoners, I was writing a reply to somebody asking about Vi, and it came out longer than expected. So, I’ve decided to share it with everyone in the hopes that it will be helpful for improving your play. I’ve played since mid-season 3, when I reached Platinum playing pretty much only Vi. Last season I hit Diamond with Vi, and this season I’m going for Masters! In total I’ve amassed probably over 4000 games with Vi across multiple accounts.

I learned a lot of what I know from XJ9’s stream, before he got banned. His style is very farm-centric and basically tries to carry out of the jungle.

For Runes and Masteries, I run:

Run AD and arpen because Vi has great ratios. The alternative would be attack speed marks, but Vi doesn’t need them because your combo doesn’t depend on attack speed, only the speed at which you can cancel autos. As for early clears, Vi does fine without any attack speed since her W is a pretty potent steroid.

Armor seals are pretty much mandatory for junglers, but I don’t run magic resist glyphs alongside them because Vi scales so incredibly well with CDR. 9 CDR per level glyphs gives you 15% CDR at level 18, combined with 5% CDR from masteries and 20% CDR from Black Cleaver it’s extremely easy to cap out on CDR. The 10% CDR from the Warrior enchantment means you will hit the 40% cap much earlier than level 18, so even if you exceed the cap, I find the midgame power worth the loss in gold efficiency.

Why does Vi scale so well with CDR?

I max E last because the damage increase per level is negligible, and the decrease in CD doesn’t really help much in early game skirmishes and duels. W is an incredibly strong skill, and you are pretty much guaranteed to proc it at least twice if you can land Q. You need the early Q max for the mobility and the ability salvage failed gank attempts. If you miss, you can just try again.

Now onto the fun part – combos. While Vi is not the most mechanically difficult champion to play, I see too many people (even in high elo) not utilizing her skillset to its full potential. Here is Vi’s bread and butter combo:

In about the time it takes to perform 2 autoattacks, you can dish out about 70% of a champion’s HP in damage. If you include your ultimate, this is a guaranteed 100-0 just from your damage alone, and the best part about it is that they will be CC’ed nearly the entire time so it is VERY difficult to get away. The part where many people fail is the execution. Here are some tips I think can help a lot of players combo more smoothly and increase their success rate in ganks.

The above is the combo you will use pretty much 90% of the time when you want to secure a kill. There are, however, times where landing Q will be impossible, so here are some alternate combos that I like to use.

This one is used if you have allies nearby who are able to dish out some damage and assist in the kill. Use it when you are far away and you notice an enemy out of position. Unless you are very fed, it is very unlikely you can solo kill someone with this combo.

This is the one I see a lot of people use, and while it does have its place, performing the main combo is much better in terms of damage and reliability chasing someone down. This one should only be used if you are already in a fight and there is no path for you to Q to a priority target. Never try to lead with R unless you have backup, and even then a charged Q is preferred.

If all of that was a bit much, here is a simple breakdown of when and how you should use your skills.

Next thing I’ll discuss is item builds. Here is what most people go:

The alternative build if you are behind is:

Most Vi guides will explain the first two builds, so I’ll just talk about why I buy these particular items. Something I’ll add is I usually buy the components for BotRK/Cleaver before finishing the items because they give power spikes much earlier in the game. Typically I’ll want to get a Cutlass right away to make ganks more reliable, and then depending on how much gold I have when I back I’ll go for a Phage or a Kindlegem. If you don’t have enough gold for BotRK and haven’t completed Black Cleaver, buying Black Cleaver components is always better than purchasing the Daggers.

Finally, I’ll share my strategy in-game and what works for me. I love to farm, and try to carry every game no matter how far behind we are, so this might not work for everyone.

So that’s pretty much all of the Vi-specific tips that I have to offer. I hope you can read this wall of text, and that it was helpful in some way. I didn’t include jungle paths/gank paths/warding because that is more general jungle knowledge and I wanted to talk mostly about Vi. If you guys would like, I can update this post with more information.

UPDATE: Sorry everybody, I totally forgot to talk about masteries. Here is what I run: 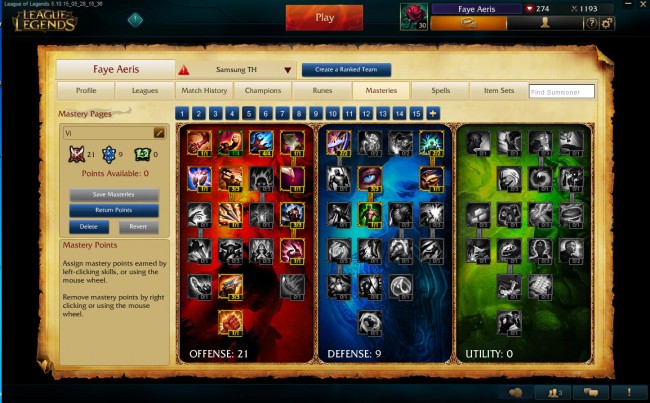 The most important things to take are CDR and Dangerous Game in Offense and the 9th point mastery in Defense. They provide the stats that scale best with Vi.