This guide is done to shed some more PVP blood (like this guide) and show a versatile loadout, which satisfies most needs .

Always remember that the amount of working implants(rank 1, rank 2 , … rank 11) depend on the rank of your ship. So your rank 5 guard frigate won’t benefit from rank 6(and onward) implants.

Note: Hail Plasma is like a semi-automatic gun, you have to press for every single shot (or hold firebutton to charge it).

As there are only (really) 2 Mods in T2 you will be going with them:
– Double Deflector
– Needle Deflector

Since we are using Plasma (EM dmg by default), we want to bring down the shields of our enemies while having “Double Deflector” active and then switch to “Needle Deflector”. Because most ships, unless they stacked it, have:
Kinetic > EM resist on shield
Kinetic < EM resist on hull ,
which is why we want to capitalize on this as much as possible. 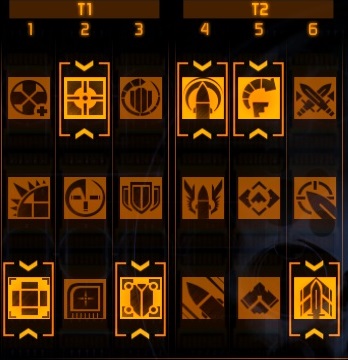 You could go for empire one aswell (i flew with the empire one for a long time), the fed one is just overshadowed by the other 2 in this instance.

Hard to say, all 3 are good.In this case it really depends on your playstlyle. Do you want to spot others? Go fed. Do you want to be disabled for a shorter amount and less spread on your weapon go with fed. Because we wil be fighting a lot and,  most likely, be in a mid to rear position of our team ( not counting beacon hunt 1st beacon encounters), to make good use of our range, we want the empire skill, to be able to change targets faster and also  add some base crit chance for our hail (5 base and 10 from this implant).

You will want the first one, if you fly a lot of intys or fighters, where you gain more from a higher baseregen of your shield, compared to a higher amount (fed) or shield resistances (jericho).

We are not so reliant on missiles, so neither do we need more velocity, nor increased range. Because of that i think it’s best to go for the dmg increase.

If you want another speedboost, because you are addicted to speed, go with the jericho skill. Fed one is pretty good for going up/down around mountains. I go with the empire one, more rotation speed in all axes, means you’ll turn faster which is very essential when it comes to dogfights. Especially when people get up close to you, which happens more than you think in a frigate, you’ll thank the gods for this.

While increased main weapon damage or critical dmg are nice to have, nothing(for our multi ship/versatile loadout , compared to a single Kalah loadout for example) is more valuable for our HAIL than Projectile speed. A few patches ago it already got a 20% proj. speed increase, and added with this, we hit 5k proj. speed, on a max. 4.5k range with the optimum being around 3-3.5 or so.

This basically means that you don’t have to lead much during a fight, due to the “prediction” reticle staying nearly on top of ships and in return  (obviously) making it easier to hit.

Hail Plasma on everything

The main reason to take the Hydra 2 over the only other rank 6 engi frig, Aliigator-M, is that it has actual bonuses and is more tanky. But comes with slightly less pitch&roll compared to the alligator.

We take the Swift MK3, as it’s the only rank 6 covert ops. Covert ops is more useful if you fly solo, whereas Recon&ECM rely a bit more on teamwork, because they don’t pack a quick surprise burst. You can carry your team to victory in detonation with Adaptive Camouflage or blow up captains that are non guard frigates.

The Deimos 2 is my personal favourite. It has quite a drawback in terms of speed, compared to the other fighters, but comes quite closer to frigates in terms of tankiness, which in my opinion you need. It’s the same reason as for why i don’t like the fed fighters, as they just die way too easily.

Asynchronus Shield Projector, you have not much shield to begin with so you’ll profit more from shieldregen

Voltage Regulator, apart from ships with diffusion shield, you always benefit more from energy regen, for example: on our Deimos 2  it  enables us to afterburn nearly infintely long.

Engine overdrive, this, together with our special overdrive module, brings us up to 663 speed, for 15 seconds, faster than anything in T2 (apart from warpgating or microwarp). EO on it’s own it enables us to keep up with fighters & intys for a short amount of time, without having to waste our special module.

Combat reboot, removes negative effects and grants us 2 sec of invulnerability, it’s just too good to pass up on for our “tanky” fighter build.Only 36 sec cd aswell.

Thermal insulator, there’s alot of thermal damage floating around in T2 so you’ll want this.
Reinforced beams, this one can be switched for reactive armor, however, i think that with the new suicide modules you’ll want more hull, to make more use of our thermal resistance (suicide module, disintegrator, torpedoes and laser are all thermal damag).

Nanodrone cloud & Shield Booster, to provide the standard regens.
Warpgate, only other module, apart from survival & restoration modules we could choose from, enables us to cross open space without having to expose us, because frigates are sitting ducks with <270 ms.

Reinforced beams & Reactive armor for kinetic resistance, because frigates have higher thermal resistance to begin with.

Orion Targeting complex: 105% more dmg on blue. Intercepters have 2 guns installed on them (fighter & guard frigates 4, frigates 6), so with this we push up our dmg to that of a fighter for a short time.

Self-Destruct: Good in combination with orion to finish off captains, or just take everyone down with you :D

Adaptive Camouflage: This is the skill we play this class for! Unlike actual “stealth” (which drops the bomb in detonation) it just removes the ability to lock onto you ( the red rectangle around enemies) and removes you from the overview map and because it’s no actual “stealth” it doesn’t make you drop the bomb.

Apart from being the best badass bomb carrier this way, it’s also friggin good to sneak up on people.Unlike “stealth” it’s effect does not stop if you are being hit by the enemy.

Auxiliary Shield Projector, we don’t have much shield, but we should still go for some more than the initial amount.
EM Diffuser, EM is the most common dmg used against shields (hence the -5 on ships for EM shield resistance), so we should try to close the gap a little and not let our shield be gone if an Eletromagnetic breeze comes by.