Many new players want to kick butts right from the start and score a lot of kills. This guide will show you how to achieve such goal in a most efficient way.

Our purpose – be a badass.

Weapon mods:
-Antimatter shells: they are effective against shields and enemies, who have a high kinetic resist. For example: guard frigate with phase shield.
-Explosive shells. 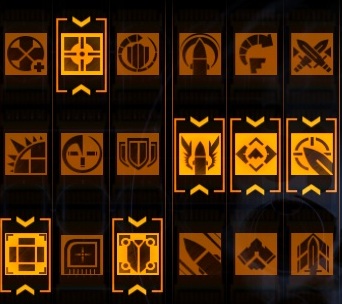 -Try to shoot from your optimal distance, which is 3-3,5 km. You’ll have superior firepower because of crit. attacks and other weapons won’t be able to reach you right away(they have shorter optimal).

–In the beginning of battle, don’t haste to use overdrive and aiming overcharge, wait for the moment when you’ll be able to killtwo or more foes under the work of these modules.

-Do not attack large group of enemies if combat reboot and engine overcharge modules are on cooldown.

-At first launch slowing field missile and after it – cruise missile. Wait one-two seconds before cruise missile launch, it will give you the guarantee, that your target won’t destroy cruise missile or hide between cover.

– Watch on your radar, look after the display how much people have locked you as their target and if there are any missiles flying at you, in any case, if you see something like this

– it’s better to fall back,even when you’re sure that you would be able to finish off your enemy.

-Use slowing field missile before you close up with enemy, especially in capture the beacon and detonation modes. Remember, flying range of slowing field missile is 5.3 km, i.e. if you are in a 3 km range near beacon or bomb, don’t hesitate to launch the missile, enemies will be slowed down on their way and it will give you huge advantage.

-When you fight with interceptor, try to hold 2-2,5 km distance to it.

– Find yourself a squad mate on an engineering frigate. He’ll provide you support with shield and hull restore modules, thus allowing you to tank way more damage, and fight against multiple enemies at once.

Good luck and have fun.