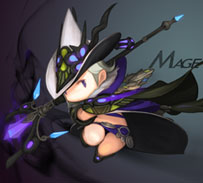 : Chain Lightning: Your basic attack, jumps from enemy to enemy. Attacks 2 enemies at the same time. Can deal as much as 83% of your magic damage, After every jump, damage is reduced by 7%. (No Cooldown)

: Teleport: You dash in the direction you are facing. (No cooldown)

: Ice Spears: Throws ice Spears at the enemy, 20% chance of frozen status, Will recover 350 MP when hitting  a boss, (Yet again, not sure if from you or boss). When using an Ice Skill, press the skill again to use this.

: Lightning Magic Boost: Has a 5% chance of causing an explosion when using Lightning Attacks that will deal 100% of Magic Damage.

: Fireball: Throws a burning ball of fire at the enemy, deals 250% of magic damage and has a 5% chance of igniting the enemy.

: Burning Land: With Fireball or Grenade, there is a 5% chance of causing a pool of fire on the ground for 4 seconds. Every 0.5 seconds it deals damage, has 5% chance of ignition. Deals 50% fire damage.

: Lightning: Shoots a lightning spark down from the sky, has a chance to deal up to 1600% damage to up to 5 enemies. You are invulnerable while using this skill.

: Blessing of God: Provides a 10% decrease of damage when hit with Electrical Attacks.

: HP Shield: When attacked from 6 meters away by an enemy, you have a 20% chance of activating a shield that provides a 20% decrease in damage for 4 Seconds.

: Patron Shield: When hit with status effect (Sleep, Paralysis, or Stun), HP Shield is activated which provides 20% damage decrease from enemies for 4 seconds.

: Big Bang:  Strengthen Lightning. You can now charge Lightning for 1 second to deal 2000% damage up to 5 targets. Deal 1600% to all surrounding targets if you instant cast Lightning. 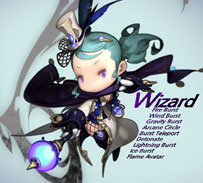 Burst Teleport: Instantly teleport to 8 meters in front of you, cast 6 Magic Missiles to attack your enemy. Each missile deal 132% magic damage.

Supreme Realm: Increases attack speed by 10% for 3 second when you got attacked.

Flame Avatar: Covers yourself with fire and stay invulnerable for 6 seconds. Enemies near you will take 100% fire damage every 0.5 seconds. Cannot cast other skills while Flame Avatar is in effect.

Friend of Elements: Reduces target’s elemental defense by 10% when Element Enchant in effect.

Element Resist: Increases elemental defense by 10% for 5 seconds when you are attacked by fire / lightning / ice attack.

Ruler of Flame: Remove all debuff on yourself when you cast Flame Avatar. Deal 1200% fire damage to your surrounding when Flame Avatar time’s up. 100% chance to inflict burnt status to your enemy.