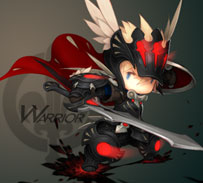 Sword Slash: Your basic attack. Inflicts as much as 93% of your damage and regains 30sp per hit.

Forward Strike: Active Skill. Lunge forward and thrust with your sword. Press the skill key again to launch another strike. If the enemy attacks during this skill, you can trigger a 3rd strike. Inflicts up to 400% of your damage on the first strike, and 300% on each subsequent strike. Uses 100sp per strike. 4 second cooldown.

Circle Slash: Active Skill. Spin your sword in a circle around you. Inflicts up to 200% of your damage. Pressing the skill key again triggers another attack, also dealing 200%. 30% chance to stun enemies, excluding bosses. 16 second cooldown.

Dash Slash: Use Sword Slash directly after rolling to inflict as much as 300% of your damage.

Biting Speculum: Lowers the cooldown of Circle Slash by 4 seconds. Increase sp gained from it by 10-20 depending on monster size.

Courage Cry: Circle Slash has a 30% of activating this skill. Smashes the ground for 500% of your damage. 70% chance to stun monsters, excluding bosses. More sp per subsequent attack. Knockback resistance increased by 2 (lowers time spent knocked back).

Shield Bash: Active Skill. Bash your shield into enemies. Inflicts as much as 100% of your damage. 100% chance to stun enemies, excluding bosses. Cooldown 45 seconds.

Windshear: Circle Slash (and probably other skills, if this is like the berserker equivalent) creates 3 tornadoes. Inflicts as much as 100% of your damage.

Hurricane: Active skill. By spinning really fast enemies are sucked in. Inflicts 400% of your damage. Invulnerability during the skill. Cooldown 60 seconds.

Wind of Victory: Hitting large enemies with Gust Sting returns 15% of your sp.

Vacuum Slash: Where one tornado would appear before, 3 appear now. (Windshear)

Slash Storm: After using hurricane, press the same skill key again to activate. Inflicts as much as 1000% of your damage.

Spirit of the Warrior: Increases sp recovery by 10 for every hit.

Chain Storm: Slash Storm now triggers 3 tornadoes. Inflicts as much as 100% of your damage.

Last Counter: Triggers after Slash Storm by pressing that skill key again. Strikes around you 3 times for 300% damage each, with another final hit dealing 800% damage. Invincible during use. 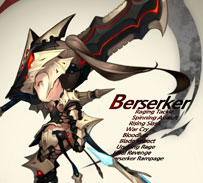 Sword Slash: Your basic attack. It can do as much as 160% of your damage stat. Regains 30 sp every hit. No cooldown.

Roll: Dodge skill. No cooldown. If you have bloodwings on, you do a small teleport instead of a roll.

Spinning Assault: Active skill. Spin your sword in a circle. It can do as much as 360% of your damage. Regains 300 sp if you hit enemies. 5 second cooldown.

Rising Slash: Active skill. Slam your shoulder into the enemy before launching into the air with a massive uppercut. May do up to 600% of your damage stat. Uses 300 sp. No cooldown.

War Cry: Active skill. Smash the ground and scream. Can do up to 100% of your damage in an 8 meter radius. Can heal you as much as 30% of the damage per hit. Chains into Rushing Slash. 30 second cooldown.

Sword Slash Strengthen: Passive. Increases chance of Sword Slash activating Cleave by 10%. Sword Slash can do up to 300% of your damage. (Basically you have a 10% chance of shooting off a giant tornado)

Fury of the Storm: Passive skill. This is Cleave, you have a chance of shooting off tornados. They pass through all enemies. They can do up to 100% of your damage stat.

Determination of the Living: Passive. Increases your natural sp recovery by 10sp per second.

Cry of Rage: Passive. After War Cry it activates every time. Increases damage by 10% for 30 seconds. Enemy damage is reduced by 10% for 30 seconds. Gain 50 sp per hit. (Note: this skill is basically a perma buff/debuff, because war cry has a cooldown of 30 seconds. I’ve also seen this activate on skills like Sword Slash, so this debuff is applied often.)

Attack Instinct: Passive. Increases attack speed by 5%, movement speed by 10%. Sword Slash, Spinning Assault, Rising Slash, and War Cry have an addition 10% speed boost. Duration is 10 seconds. (It has the exact same description as Bloodwings, this might be a bug in the game)

Blood Call: Passive. When large enemies are hit with Rising Slash you can as much as 20% of the damage you inflicted. Increases attack speed by 5%, movement speed by 10%. Sword Slash, Spinning Assault, Rising Slash, and War Cry have an addition 10% speed boost. Duration is 10 seconds. (It has the exact same description as Bloodwings, this might be a bug in the game. Also, this causes healing by any skill, other skills have healed me before.)

Body of Steel: Passive. Reduces cooldown of Rage skills by 20%. Knockback resistance increased by 1 (lowers the time you are knocked back). (Not sure which skills this lowers the cooldowns of, only actives have cooldowns)