Assassin have receive a pretty nice DMG Buff in PvE with the most recent patch and I wanted to share my new PvE built and explain the skills and reasoning behind it.

If wanted I can do the same for Crytals and Bo-Pae. 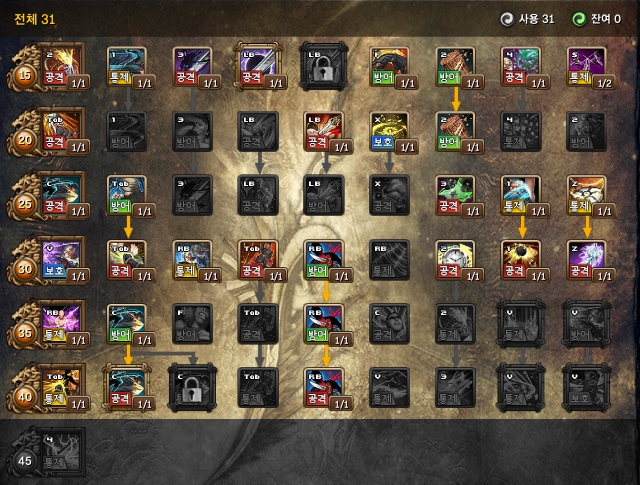 Ill just start with the tiers from top to btm and explain on why I chose the Talents that I did. I will number them from left to right and only count the skills I actually skilled.

1. Reduces the CD of your Stealth by 3 Seconds (9 to 6).
Not mandatory but can be usefull at times.

4. Enables you to use F after most Knockdowns to quickly stand up again. Only works for 0.5-1.5 seconds depending on the Knockdown.

Really usefull skill to quickly get up if getting downed, esepcially when TAB skill is on CD.

5. Reduces the Chi cost of your Nr. 2 to 0. Will also restore 1% max Health on succesfull evade of an Attack using this Skill.

6. Makes your Poison Breath last longer. It will now apply 5 Poison Stacks if cast for the full Duration.
Usefull for Trash AOE and to apply poison if your C skill is on CD if you want to save its CD for other evading.

7. 1 Point only. WIll increase your SS CD by 2 seconds (8 to 10) but will plant nails on the ground dealing damage over time and slowing the enemy.
Not mandatory but a little bit extra damage when evading with SS. It can also Procc weapon effeckts such a Chi Regen or Crit Buff.

1. Decreases your LB (Stealth) CD by 2 seconds (6 to 4). This skill will now apply Bleeding on Hit. It will also now restore 3 Chi.
Must have skill. While you sacrefize the stun (Wich is not needed in Party play). You gain a lot. Bleeding and Chi restore are really useful.

2. Increases the CD of your Smokebomb by 6 Seconds (18 to 24). Your smokebomb will now heal people while standing inside of it.

3. When succesfully evading an Attack using your 2 Skill (the Log) you will gain 99% Evade chance for 2 Seconds. Removes the 1% Max Health Gain.
Mendaroty. Adds a lot of survivability against attacks that hit more then once, i.E. Whirlwind.

2. Your Shuriken now apply Bleeding and Poison on hit.
Pretty basic. A great why to apply your both most important debuff from range.

1. Your TAB(Stealth) skill will now deal greatly increased damage and becomes AOE, it does not Knock back anymore. Additionally it now restores 1 Chi every 2 Seconds for 6 Seconds.
Quite usefull for AOE and DPS as well. Esepcially when you do not need to refresh your bleeding using LB(Stealth) as it deals more Damage.

2. You can now use RB while sprinting to teleport and stealth onto your target.
Usefull skill, again not mendatory but usefull at times.

3. Reduces the Chi Cost of your TAB (On Knockdowned target) Skill to 0. Will half its damage. This skill will now restore 1 Chi each 2 Seconds for 10 Seconds.
Im actually not that sure about this one yet. Never used this skill before the update. Definitly only worth it if you have a KFM in your party, else you wont be able to even use it on bosses. Your Landmine also has a higher priority so make sure to get the to explode first.

4. Your RB will now grant you 6 seconds stealth when being used on a target that has 5 Poison stacks.
One of the most important Talents for PvE, will also be further improves in higher tiers.

5. Your 2(Stealth, Sticky Bomb) Skill will now need to be activated a second time to explode after being sticked to an enemy. If detonated before time runs out it will deal a great amount of AOE damage now while applying bleeding as well. If not detonated manually the damage will be really low.
Great Damage for only 1 Chi cost. While also applying Bleeding. Pick it up!

7. Your Landmine will now deal 300% increased damage on Knockdowned target (Includes target mounted by a KFM). It will apply Bleeding as well. However your Landmine does not Knockdown anymore!
This is a great Talent if you are running with a KFM in your party. Place your Landmine while the KFM mounts a Boss for some big Crits. Keep in mind that you can not support your party with Knock down anymore. But it should not be neccesery in normal parties. If you do not run with a KFM it will be quite hard to use efficently.

1. While using your C skill you are imune to all attacks including CC.
Really really great, not much more to say. Will also further be improved in the next tier.

2. See Level 40 Tier Skill 2. Never skill this without skilling the next Tier!

1. Reduces the CD of your C skill by 15 Seconds (45 to 30). Your C skill also now apply bleeing with each hit (5 in total).
Reduced CD on your best evade skill while also applying Poison? Great! Also a good opener to get Poison on quickly.

2. Your RB now deals additional damage to target with 5 Poison stacks. You will also regenerate 1 Chi whenever you Crit with this skill.
One of the greatest buffs for Sin PvE damage with the recent Patch. Greatly increased Damage and Chi regen on Crit. As a Sin you have the highest Base Crit making this extremly potent.

So this is my current build. I will now explain some Talents that can be useful depending on the situation on may differ on your playstyle and group setup. Here the Skill Numbers are again from Left to Right but counting all Telents.

Skill 7 (Poison Butterflies).
Instead of having a poison breath you will now sent Poison Butterflies to harras your enemy. They will deal some damage, apply poison and will deactivate defensive skills of your enemy in PvP for 8 Seconds. After hitting a target they will to the next enemy, up to 5 in total.

This can be a little bit of increased single Target damage in PvE as well but not good enough to invest a Talent point into it.

Skill 4
Your LB(stealth) will now stun the target for 1 second. Your will gain 30% Dodge for 8 Seconds. You will also heal 20% of your damage dealt.
If your team needs an additonal stun this can be usefull. It will also give you increased survivability for the cost of DPS.

Last Skill, Landmine.
If your team needs an addtional Knockdown and/or does not have a KFM, you can consider saving the points here.

Skilling it on the level 35 Tier will enable you to teleport to your ward while being stunned. But since you need to place it before you even get stunned this is not all that usefull.

Skilling it on the level 40 Tier will now grant you an additional skill after being summoned to your ward. This skill will make Allies as well as yourself imune to damage and CC for 10 Seconds.
Since you can Teleport dead/meditating allies to your ward this can be really usefull to save them from AOE’s and makes you imune to help them rezz, however often times getting them away from the boss with only the ward is enough.