This introduction is written for all English-speaking players who will be joining China’s Blade And Soul. As there is no English patch at the moment, I will try my best to translate the classes, UI and basic controls for your easy understanding. For players that have already played the Korean version, you will find this very familiar. I am currently playing on CN Blade and Soul CBT so should there be any changes when OBT comes, I will keep this updated.

As you can see most of Blade and Soul characters are not gender locked, except for the 天族 aka Celestial race whom only have female characters. There are certain races designed to suit certain class due to their nature of physique and magic inclination. I shall leave it to you to explore more on this during character creation. =) 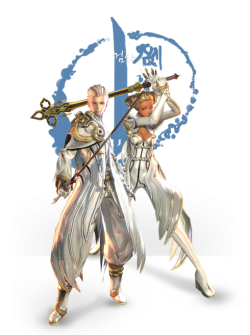 Uses sword to unleash a combo of attacks, fast acting and quick when executing attacks. A Blade Master is consider a tank–like character in a party as they have block/parry to absorb or counter enemies’ attacks. With the new 2.0 update from Korea, Blade Master has the ability to grant invincibility frames to party members (for a short period of time) when they block successfully.
Difficulty to play : Medium 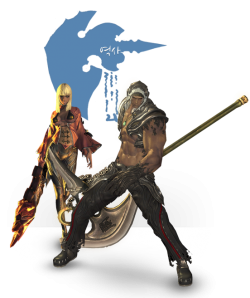 Destroyer has immense strength from within and wields a gigantic axe as a weapon of choice. They love to deal fatal blows to enemies and takes advantage of situations when an enemy is weakened by grabbing the enemy’s body. Destroyer has great defense which makes them ideal for melee attackers and they have the largest AOE damage compared to other classes. Another character that can be the “tank” within the team.
Difficulty to play : Easy 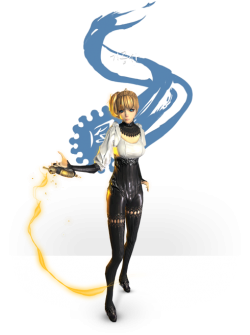 Force Master is considered the highest damage controller that deals damage from a distance. They have a range of abilities from fire to ice and explosions that can inflict conditions on their enemies. (For e.g. slow, burn) As magic users, their defense is relatively weak and more prone to melee range enemies.
Difficulty to play : Medium 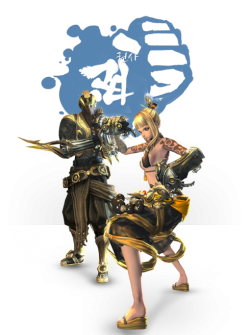 A master of kungfu, this class utilizes their fists in combat. Most of the attacks are delivered fast and in combos for effective melee ranged blows. Kungfu master is fast and can attack and defend with ease.
Difficulty to play : Hard 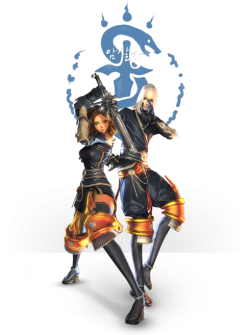 Assassin is a class exclusive to the Jin race. An assassin has stealth capabilities to either sneak in to attack unwary foes or vanish to escape from any incoming threat. Equipped with lightning fast daggers, they can swop in to deal damage and leave booby traps to delay and knock the enemies off balance while they escape.
Difficulty to play : Medium 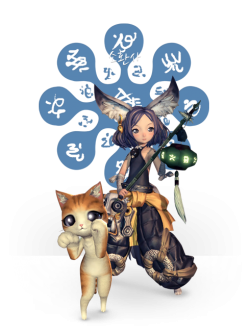 Summoner is the only available for the Lyn Race. The Summoner is able to summon a pet to attack on its behalf. The pet acts as your main arsenal against the endless mobs that you will encounter during your journey.
Difficulty to play : Easy 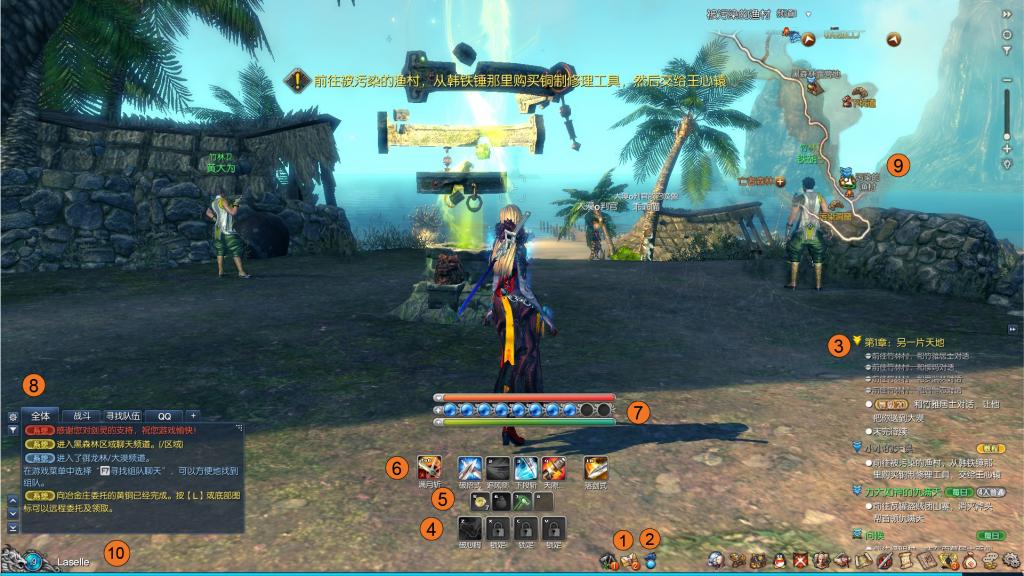 1. Mail system. You will receive daily mails and expired trading house items from here. You can also mail or receive mails from other players.

2. FTG aka Fatigue Button. There is an option for you to save up the ftg you can’t finish today to be used tomorrow. I am not sure how this will work yet as there is no fatique bar in CBT currently.

3. Quests Accepted. This is the Quest Panel that will display all the quests you have accepted till date.

The quest icons are as follows :
Yellow – Main quest. Complete this quest to proceed with the main storyline.
Blue – Side quests that you can attempt to gain more exp, gold or loot.
Red – This is a faction quest. Somewhere around level 16, you will be prompted to select either Red or White faction. This quest usually involve capturing certain locations, or destroying an opposing faction objective. The difficulty for the quests can be easy or downright hellish as players from opposing factions can be up against your objectives. Be prepared to face some level 45 players who can wipe your party in seconds. 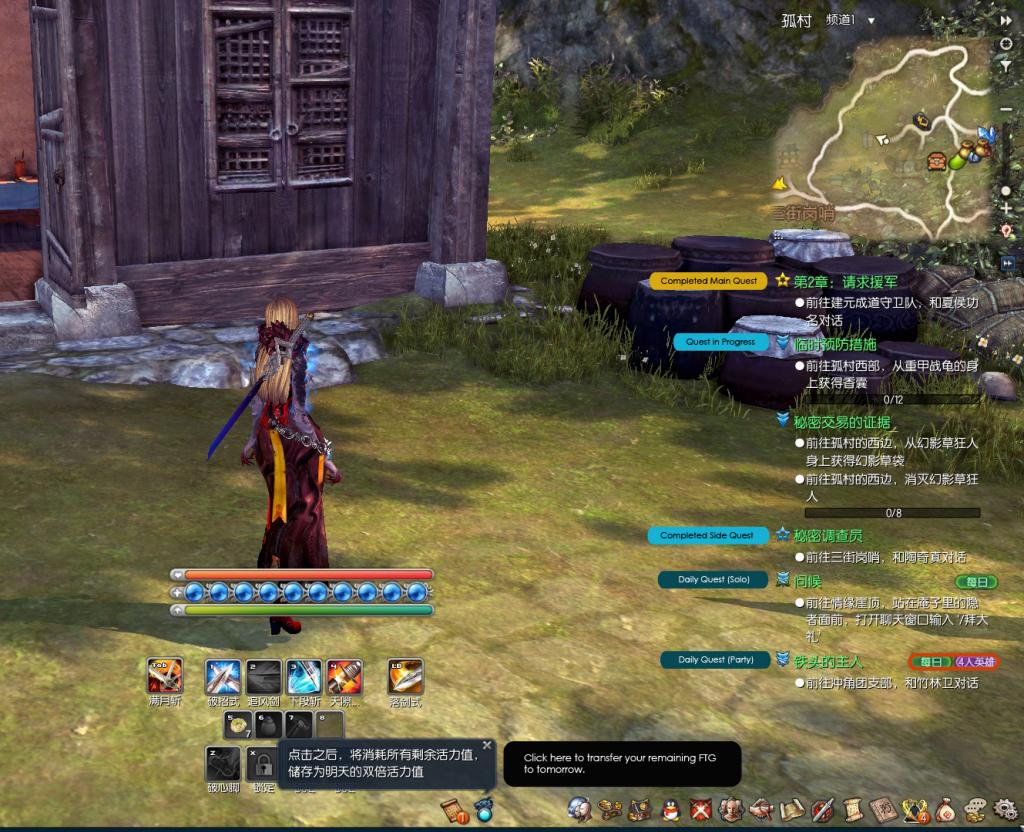 4. Secondary Action Buttons. Basically there are 2 sets of buttons that you will be using to cast your skills. This second set of buttons will unlock as you progress higher in level.  (Buttons  Z,X,C,V) There is also a conditional attack that can trigger powerful attacks by pressing “F” when prompted.

5. Utility Buttons. These are a set of four utility buttons. You can access food and other healing items from here.

6. Primary Action Buttons. This is the primary set of buttons that you will be using to cast your skills and hopefully string them into combos. (I will be explaining this from the perspective of a Blade Master, other classes might differ a little though)

The Left most button can be accessed by pressing “tab”. This is consider a special skill that can be cast anytime when you have enough “chi”.

In the middle, we have the 4 basic buttons for you to input your attacks (Buttons 1 to 4). As your level gets higher, you will unlock new skills that can replace some of your current skills.

The Right most button is the “Right Click” button of your mouse. This is consider another special skill that can be cast anytime when you have enough “chi”

Health Bar (Red Bar) – Health Bar is your HP, deplete it all and you will go into an incapacitated mode. Party members may give you a hand and aid you in your revival or you can simply crawl to a safe place and recover yourself.

While in the incapacitated state,

Press 1 to enter self-recovery mode. You will take approximately 20s to recover 80% of your HP. Should you get hit while in recovery mode, you will die instantly. Other players can give you a hand while you are in this mode to reduce your recovery time.

Press 2 to ask for help from nearby friendly players.

Press 4 to revive at a safe location.

“Chi” Bar (Blue Bar/Globes) – This is your “Chi” bar, you will require “Chi” to execute your attacks. More powerful attacks require more “Chi” to execute. As a Blade Master there are certain skills that help us recover “Chi”.

8. Chat Box. Chat Box has the usual Party Chat, Guild Chat, World Chat and such. There is a window for party recruitment so do check them out while you are looking for party.

10. Character Level and Experience. Your Character’s name and current level of your character, you can also see the progress of your experience bar.

Basic Tips for Beginners
i) Character Menu – Press “I” for your inventory and “P” to access your character stats, items, equips and Bo Phae plates. I will do a more detailed introduction on another post.

ii) Pressing the Escape button allows you to change the settings of the game.
UI section – Here you can select and shift the health bars, action buttons, enemy’s HP bar around your screen to have a fully customized UI experience.
Graphic settings – here you choose the graphical settings that is optimized for your hardware.

iii) Teleporting
Teleporting between 2 discovered waypoints can be pretty convenient by just paying a small fee. The game used to require teleportation scrolls but the current patch allows you to travel just by paying a fee. The fee is pretty negligible and saves a lot of time.

iv) Faction Doboks aka Costume
There will be three types of doboks namely, White Faction, Red Faction and Neutral. Wearing either Faction’s dobok will allow you to attack any opponent who is wearing the opposite faction’s dobok on sight. I would recommend wearing the Neutral Dobok until you have max level to prevent disruptions while attempting quests.

v) Mini Bosses
Throughout the map, you can find mini bosses that you can kill with a bunch of players and loot “essences” to exchange for better equips. Some of the mini bosses to name are the “Golden Destroyer” in the Desert and the Huge Chinese Zombie at the graveyard map.

vi) Loots in Mini Dungeon
The Loot System in Blade and Soul is auction based, meaning you will need to outbid the other player to get the item. The gold bided will be distributed among the other players who did not receive the item.  This is good and bad in a way because the auction-based loot system might sometimes disrupt the tempo of your fight. However, the advantages of having this system is that everyone take away something at the end of the party.
When you are auctioning for loots, only auction for items that your class can use. Skip the items that do not belong to your class as the items in this dungeons are usually binding and cannot be sold at the Trading House.

vii) Mail System and Trading House at Level 15
You will only be able to access these services once you are level 15. Therefore, sell all useless stuff or break them down into powders to keep your inventory clean. Inventory space is very very expensive in Blade & Soul T_T

viii) Choose your class wisely
Depending on the population of Blade and Soul, you might want to choose a class that allows you to compliment your party at the later dungeons as it can be really hard.

viv) Know the boss’s skills and your skills
In Blade and Soul, there is no healer class meaning other than drinking health pots and eating food (which takes damn long) there are no ways for you to replenish your HP during battle. There are also no invulnerable frames that makes you immune to any damage. This can be a painful issue for tanker or player with the highest damage as they will hold the aggro. As you level up, there will be more challenging dungeons end game therefore knowing the boss’ skills is a must.

P.S. Time your attacks and reduce excessive spamming of skills to keep yourself alive.I have included a first 15 mins gameplay of Blade and Soul below. Enjoy~