This article is about a special category of damage increase effect in Dragon Nest: damage duplicator.
The most prominent examples of this effect are the additional damage from Finishing Attack of gladiator and the Dark Elf Dance (Dance 2) of Dancer. The new assassin class introduces 2 new party buffs with dmg duplication effect as well.

The term “Damage Duplicator” is used to describe such effect for 2 reasons:

(a) To differentiate it from other dmg amplification debuffs which “amplify” the original damage, such as frozen status, and general damage debuff from haemorahage of sword master.

(b) To highlight its characteristic whereby a different figure pops up instead of a higher damage number: the effect basically duplicate the original damage figure by a certain % and appear as a separate number.

Recently (end of aug 2013), DN KR has implemented a small change to the display of damage duplicator: a “+” sign is added to the damage figure (yet to be applied to cdn though). This is to differentiate it from its original damage and further highlight its role in damage dealing. 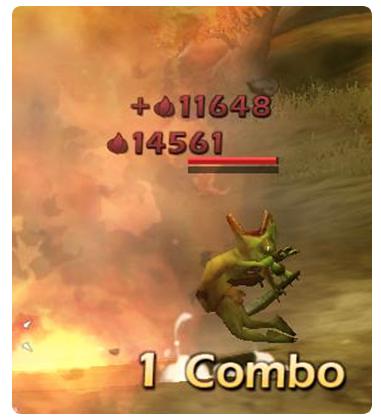 The characteristic advantages of damage duplicator are:

(a) free from the cap of other damage amplifications mechanics.
(b) duplicate the amplified damage as a result from freeze status and other general damage debuff, not the original skill damage.
(c) do not interfere with or limited by other damage duplicator effect.
(d) by-pass bosses semi-invulnerable effect (to be explained in detailed later)

Each of the characteristics will be explained in further details.

As you may notice, freeze status and general damage damage debuff are quite saturated in the current environment. To increase the damage further, damage duplicator is required since they are not in the same category as those damage amplificators.

Duplication of Amplified Damage
The effect of damage duplicator works on the final damage figure which encompasses all other amplification effects.

For example, suppose your skill deal 100k damage only.

Your total damage output is literally 8 x original damage, which explains why dancer’s popularity has been soaring in DDN.

Non-interference Effect
List of damage duplication effect: (only show the max skill effect with +1 accessory if any)

Passive
Burning Hand (Saleana): 100% dmg at 20% chance, fire skills only, dmg or chance can be increased with plate.

Gravity Controller (Majesty): 100% dmg. only work for gravity switch, blackhole and gravity ascension, on targets which cannot be disabled by them.

Critical Break (Sniper): 50% dmg at 50% chance. dmg or chance can be increased with plate, only trigger when dealing unresisted crit dmg.

The damage duplicator will just be applied to the amplified damage separately and appear asseparate, standalone damage figures, not as one single figure only.

For example, if you hit a target at say 50% HP with Finishing Attacking, under the effect of Dance 2 and Dedicate Crow, you will see 4 different damage figures: 1 original damage, 1 “+” from Finishing Attack itself, and another 2 more “+” from Dance 2 buff and Dedicated crow.

Which of the two is more effective at what % hp of the boss? 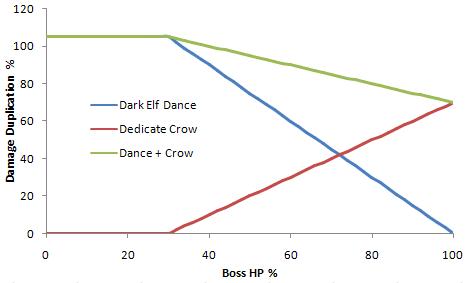 The graph shows the extra dmg of the dance 2, dedicated crow and the sum of extra dmg % from both. Obviously, dedicate crow is more effective than Dance 2 at the start of the battle when the boss is almost full HP.

However, the damage duplication % drop steadily afterwards. At 72% HP, the two lines cross. Dance 2 will be superior from 72% HP onwards. This is especially so, when the effect of Dedicate Shadow disappear totally below 30% HP.

If the party has both chaser and dancer, the sum of damage from the two is actually very respectable. The additional damage % from the combination of the two buffs ranges from 70% – 105% throughout the whole battle.

Nonetheless, due to the short duration (15sec) and moderately long CD (90sec, though easily shorten by Time Acceleration or Spirit Boost), the party needs to be well-coordinated to maximize the damage duplication effect from these 2 buffs.

This is the only limitation for damage duplicator party buff as compared to the freeze status or general debuff which are typically applied constantly throughout the whole battle.

Piercing Semi-Invulnerability
This is one of the most interesting aspects of damage duplicator, which I am not even sure if it is a bug. In DDN, some bosses will enter a semi-invulnerable state, when it is casting certain skills, which reduces all your normal damage to 2 digits.

This mechanic has been exploited in DDN HC mode to shorten clear time, with proper selection of classes with dmg duplication effects. More importantly, it creates new DPS windows which wasn’t even there before. The most prominent examples are, medusa while casting 4 lizards and golem in DDN HC mode, during curse casting, the party can actually deal huge damage to them, thanks to dance 2.

Not to mention, they have also given assassin a rare defence reduction debuff (similar to iron wall suffix). The prospect of assassin is still unknown in the upcoming black dragon nest, but it looks promising due to those unique party buff/ debuff.

If I make any mistake in writing or give any wrong info, please comment/feedback since some of the things I have written might be beyond my knowledge.

There are a few more skills which generate a separate number following the original damage.However, i do not classify them as damage duplicator since they do not ‘duplicate’ the dmg which generate them.

The main difference between these skills and damage duplicator is that they are not affected by freeze status or any other normal debuff. Nonetheless, I believe these skills also have the ability to pierce semi-invul state.