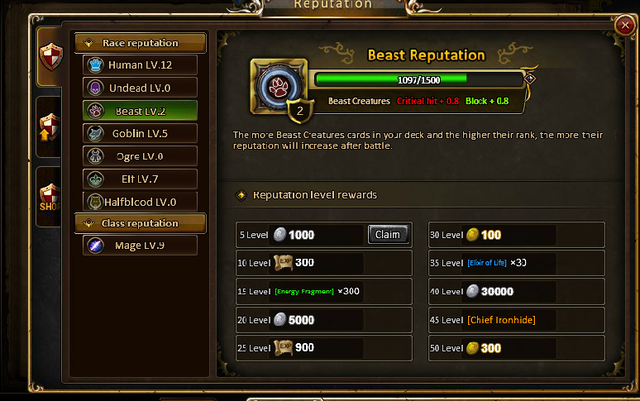 While your purchasing options are limited, the Beast race is very versatile and can play many different roles on the battlefield. With multiple offensive and defensive options, this is certainly a race that deserves respect. It is split up into three groups, and one very special group:

While reading the thread you can navigate to the cards using this list.
http://wiki.kingsandlegends.com/index.php/Beast_Cards

First up are the Hounds. are split up into two additional groups:
-Melee users
-Fire users

In the Melee users category, we have the Hunting Dogs, Hounds, and Fiery Hounds.
The Hunting Dogs are the main offensive monsters, with their low cool down of 1 and their Sprint ability making them able to move 1 extra space. Putting these in your deck is essential, should you choose to create an offensive Beast build.
The same goes for the Hounds. The only difference is that their cool down is 2. With this higher cool down however, comes more health, which means they can utilize Counterattack more than the normal Hunting Dog. This allows them to attack enemies that attack them; if they are in range.
The Fiery Hounds are a little different. As well as having the usual abilities a Hunting Dog would have, they also haveRage 1, allowing them to gain 1 attack point after taking damage. This is increased to Rage 2 at higher levels. In tandem with the Sprint and Counterattack abilities, the Fiery Hound can cause devastating damage on the battlefield.

Next up are the Lizards, split up into 2 groups yet again.
-Melee Lizards
-Thunder Lizards

In the Melee Lizards category, we have the Lizard, Armoured Lizard, Aegis Lizard, and Chief Ironhide.

The Lizard is a defensive monster in the Beasts category. With the potential to have Armour 2, it is a cheap way to defend yourself.
The same goes for the Armoured Lizard and Aegis Lizard. however, both have the Knock Back ability. This can be used very effectively to push enemies off your side of the field, should you feel pressured.
Finally, Chief Ironhide, the captain of the Melee Lizards. Although it has low power, it makes up for this with the Attack 1: Beasts ability. This gives Beasts an extra 1 attack point. This will be increased to 2 when at the Godlike rank, but there haven’t been any so far who have accomplished this. Chief Ironhide is the only support character in the Beasts race, but he will be able to support for a long time, thanks to his armour.

Next is the Bats category, split up into 2 additional groups
-Vampire Bats (A.K.A Undead wannabes)
-Poisonous Bats

In the Vampire Bats group, we have the Bat, Bloodthirsty Bat, and the Scarlet Bat.
The Bat is an inexpensive flying unit, which acts similar to the Vampires in the undead race, having theVampirismability. It difference is that it has the Flying ability. The bats are the Beast’s only flying units, so they are the only monsters who can tackle air units effectively.
The same goes for the Bloodthirsty Bat.
The Scarlet Bat is different however. It has the Bleeding Attack ability. So if you get impatient when trapped in a battlefield swarmed with priests, this is the one to use.

In the Poisonous Bats group we have the Venomous Bat, Septic Bat, and Spiteful Bat.
All these bats are similar. As well as having the ability to fly, they also possess the power to inflict Shadow Damage.
Venemous Bats can have Toxic Blade 1 or 2
Septic Bats can have only up to 2, and Spiteful Bats can have up to 3. If there is a card with minimal armour, but high health, these bats are a good option to take that card out. Note that the Shadow damage is affected by abilities that involve magical resistance.

There is one card that falls into both categories of bats: The Virulent Bat King. It can also use the Scarlet Bat’s Bleeding Attack ability. But it’s most devastating feature is the Decay 5 ability which deals 5 Shadow damage at the end of the affected card’s turn. It is the most devastating Shadow Damage ability, increased to 7 at godlike level. In combination with the ability to fly, this bat plays a hit and go strategy, poisoning enemies, then jumping over them next turn to attack the next one

Last but not least, the possible king of beasts: King Asterion. Perhaps the most mystifying trait of this card: It wields an axe, yet it attacks with Lightning.
Another error is found in the wiki: The unique ability this card possesses is not Stasis Shield 2, but Static Shield 2. This is increased to 3 afterwards. This is devastation at it’s finest. After taking physical damage(Damage from melee or bows), the attacker takes 2 lightning damage (3 if Asterion is at Godlike level,) and is stunned for 1 turn. Which means the safest way to attack this is by using magic or Holy Light wielders. This brings us to it’s next ability: Resistance 2, increased to 4 at Godlike level. Possibly one of the best tanks in the game, this cow is truly a death threat to fast food restaurants everywhere.

Thanks for reading the guide guys!