Since i don’t see anyone else making one of these guides, i decided to make one of my own.
My decks aren’t the best and i do rely a lot on reputation bonuses to do critical damage. But don’t worry that’s not what gets you to level 46, it’s the strategy used.

I got to tower level 46 and I am not sure i can progress any further, since there are an awful lot of godlike units being spammed. The boss draws quicker than me with premeditations. T___T

Although these are mainly ranger decks, they might still give you a good idea of what might help you to pass a level in the tower. If you got a level you can’t pass (and it’s 45 or below) feel free to ask me for guidance. I am sure I can give some useful advice!

I have multiple decks for the tower and i split them in categories. I use same decks regardless of difficulty, rarity level of the boss cards that is. And yes i usually make a special deck for each type of encounter, even if just the main character differs.

Here are the decks for each encounter (sorry i can’t remember all the units in each individual encounter):

Disinfo is mainly for augustus since he is high cooldown.
Note i have vigis as well as centaurs with hit and run, these are there for a better beat down of enemy cards. They focus down to 0 health the enemy units much faster.

It’s similar to the first deck. Note the use of cavalery to counter the archers. I usually try to add in the direct counter if i have it!
Feles and Tengu deal lots of damage. I do focus a lot on dealing much damage quickly since the opposing units get quite a lot of health on the later levels.

Here you might be tempted to use a pegasus deck. Didn’t work for me on the higher levels of same encounter tho.
So what i did is add some holy lights and cures. Basically heal yourself to hold out while you deal some straight forward damage and work yourself forward. Yes cure is indeed very important, you don’t want to loose anything!
The one pegasus has 3 resistance, that’s what i like about it. There were some ghosts, so it did help.

Cavalry and Pegasus with 1-2 cooldown 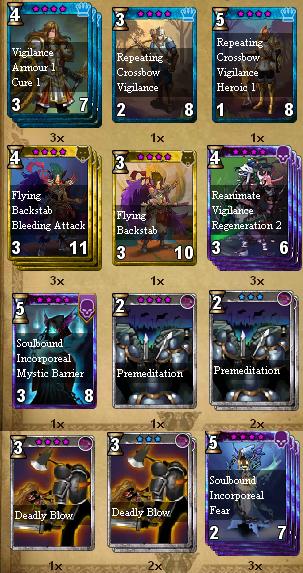 Now for this you need lots of vigi backstab and some damage skills. The enemy will get very quickly to your health.
I’d also recommend building up some health by adding gems in your armor, not that it’s mandatory, but if you got 25 health then you obviously might loose just because of that.

Cavalry and Flying friends with 4-5 cooldown 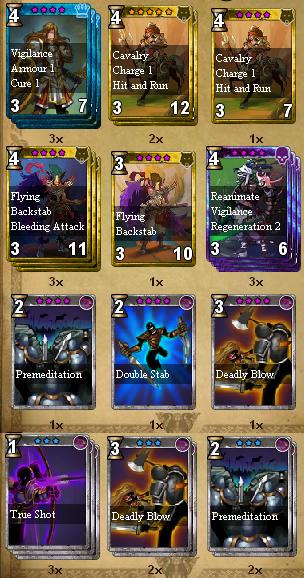 You might not note much of a difference, but look closely. This deck is more offensively while the one above is more defensively built.
In both cases i got vigi units because they help me get rid much faster of threats that are speeding towards my character.

This has disinfos for emrys and also reveal weakness because the units were quite high on heatlh. I suggest you pack something to disable emrys even if only for few turns.
I use vigi and backstab because this encounter had also low cooldown cavalry!
The units with damage reduction are supposed to hold the lane until you clean off the cavalry and slowly work your way forward.

Cavalry units are the direct counter to archers. Use some of them.
Hit and run centaurs help an awful lot since the crossbow units don’t have very long range.
Place some vigis on the side lane so you don’t have to (always) deal head on with 6-9 damage.
I use disinfo since some of these units have 6 cooldown!

Note some feles don’t have sunder armor, so the damage reduction units are very useful in this case.
Centaurs with hit and run are wonderful since you want to somewhat keep distance. Don’t forget to kill Harfn when he comes out!
Drop feles when his feles are close enough to take the damage so they won’t hurt you.

This is a sort of defensive beat down.
You got your tanky units front holding the lines agains the centaurs and the vigi / centaurs in the back dealing damage.
Don’t forget feles with sunder armor for the lizards!
Important Note: the boss casted Hermes Wings against me so the tengus weren’t there just for the extra damage, but actually protected my life points too!

You don’t need the elke. You don’t need the desperate soul either.
You DO NEED something that helps you focus damage on a single unit. I use aoe spells to increase the damage dealt. Those are the only skills that do deal damage to nimble units.
Overall the nimble units have relatively low damage, so a few tanky units will help for sure!

I use something similar to my sanguine tribe deck. A bit of tank and a bit of massive damage.
It works very well until level 46. At least it worked very well for me!

Sorann is a low cooldown card that can counter a rush alone with ease. So you can either risk rushing (which i don’t recommend) or you can go in for a slow beat down of the opponent (which is safer). Sorann isn’t as much trouble with 3-5 cooldown units.
Basically get something tanky at the front so it won’t matter if Vel uses forestfall or not. Lizard or something with 2+ armor or a Dread Phantom will work just fine. In fact Dread Phantom is really fun when fear activates!
Centaurs and Disinfo are mainly for Ryli, but they do help overall as well! They are there because centaurs keep distance from Ryli and the disinfo can disable her.
I took care of vel with the damage skills and the vigilance units on the side row.

This was a strange encounter, but nonetheless one that i’ve met even at the godlike stages (36-45).
It can get quite nasty if you don’t get rid quickly of these units and it’s actually very difficult to get rid of them because of the constant heal. I am not sure but i think the boss was even using a human priest card with cure that was healing all allies.
Tengu with bleeding and ruptures are somewhat mandatory for this encounter. You’ll want to stop the healing for good.
Also they aren’t very high on attack. Some armor will increase your winning chances!

Well hope this helped. If you have any troubles with an encounter prior to level 45 feel free to ask, i might have forgotten to add some important details, so do ask if something is not clear!
In fact you can give a list of cards you have available and i’ll try my best to build a viable deck for an encounter in the tower you have trouble dealing with, regardless of class.