Templar Assassin is perhaps the most under-rated, under-played and unappreciated midsolo hero in the metagame right now, despite her impressive early game ability curve and overwhelming snowball potential. Here’s a guide to optimise her abilities, abuse her potential and explore the overpowered usefullness of a single hero.

Although a common starting ability to avoid the point blank 140 base range, it is an ability with one of the highest skill->return ratios in Dota2.

Compare it to great abilities like Dazzle’s Healing Wave or Sven’s Storm Bolt, that can at best hit the highest number of targets for an optimum amount of damage. The skill required to hit a 3 man stun or a full surround heal can be shared by both extremely good players and above average players.

Psi Blades however, based on your skill, can be used to nail the enemy hero 1/3 hits easily with a bit of practise. Consider 2/3. Imagine every hit a harrass connection. Not only do you gain base range, you behave like a longer-ranged range unit when harrassing your opponent.

Another great reason Psi Blades perform at lvl 1 is the way in which creep waves clash. A standoff between players baiting distance, harrassing or just waiting for last hit will often leave 1 creep from each team on low hp, making it impossible to get both a deny and $last hit$.

Psi Blades say ‘have some no’

The units hit as a result of Psi Blades take pure damage equal to the damage taken by the initial target. This means that your highest priority is to damage an enemy hero via creep hit. The creep has the lowest physical resistance and will take the largest amount of damage. Here is a small vid showing the optimization of damage when choice presents itself. (Granted this was agains a support tree but any hero would have lost that amount of health)

Psi Blades Also have a disgusting synergy with Refraction

The true beauty of Templar Assassin, Refraction’s +3 instances of whosyourdaddy, to the exception of Damage Over Time opponents, will just about cease all agro harrass against you in the lane.

When denying an allied unit, no wait even more unreasonable, when attacking an allied unit: your free 20 dmg (40,60,80) doesn’t drop an instance counter… … …
You still have +3 (4,5,6) in offensive Psi Blades…
untill the timer on the buff runs off…
which is identical to the cooldown timer….

Here is a short video of the 30s-1min stage of the game (wave 2) and refraction counters abuse. Clinkz gets harrass hit 4 times by the same refraction after which the buff still remains +1 to offensive till the timer ran out. The 1st instance of harrass still went through even though the target died before the projectile connected.

Few heros can outlasthit indefinite bonus damage, at best (for them) all of your opponents’ mana will be spent at attempts to $last hit$. Unless they have 100+ damage spells, and based on projectile speed even then, your opponent will find it very, very hard to farm up.

While pushing a tower Refraction serves as great tanking of the tower while the damage-per-second from the creep wave is preserved. Taking a hit or few over and above makes for a good use of a Bottle charge.

This aggressive build into Meld is used mostly to counter any opponents’ attempt to harrass you out of lane. The burst in damage and setup in -armour allows you to hard- hit most heros to 1/2 hp in the 1-3 hits of direct damage given through Refraction.

Meld is mainly maxed out first since the abuse of aggresive Refraction counters leaves you with little motivation to push Refraction lvls 4-7. Meld is also arguably more usefull on your side lane gangs with Bottle as both Invisibility and Haste set it up quite easily.

Although the bonus (50,100,150,200) damage does not pierce with Psi Blades, the bonus damage as a result of armour reduction still does.

Second only to invoker for diversity of use, Psionic Trap like all ultimates is the most powerfull ability in Templar Assassin’s arsenal.

Cheap mana cost, easy micro, incrementing max number of traps and decrementing cooldown make Psionic Trap used all the time, everwhere in every way.
At lvl 6 (sub 5 minutes) Templar Assassin ordains:
-I will see where the rune spawns
-You will not beat me to the rune
-I can scout your camp stacks/ancients
-You will not surprise rosh
-I can solo rosh lvl 7
-I can slow creep waves to line them up for Psi Blades
-I can more easily escape you
-I will kill you

Psionic Trap powers up over 4 seconds (5% slow per second to a maximum of 50%) after being placed and motivates you to set your traps up in advance. One successfull 50% trigger allows you to power up your next next trap slightly longer making it that much more effective in a run-down. 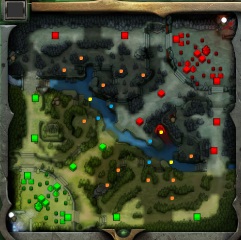 The yellow dots are the must-have rune-rosh scouts.
The blue dots are the passes trapped to prevent most heros from beating you to the rune.
The orange dots are the general neutral scouts.
In general any high-ground placement is also usefull as it gives you small warning for fog-of-war ambushes.

Item of interest Quelling Blade???
Although Quelling Blade only buffs ranged heros by 12%, and not the ridiculous 36% for melee, it serves to essentially cancel out the creep’s physical damage resistance of 13% from its 2 armour. At lvl 1 with Templar’s 58 base damage with just 2 Iron Branches and reliable dice of damage of 3, getting last hits should be uncontested…
Quelling Blade has almost become an indespensible item against Nature’s Prophet and his spike in appearance since TI3.
Lets not even begin on the abuse of Quelling Blade on Refraction.
The true scary part about Quelling Blade is that by hitting creeps, on well placed Psi Blades you are essentially nailing the enemy hero for 12% too.

The standard Healing Salve, Tango and Clarity fit in for reliable early regeneration in the lane with the two Iron Branches slotting in for cheap stats with open options for a Magic Wand.

Rushing the early Bottle is an absolute must because of the overwhelming rune control a Templar Assassin exerts after lvl 6.
I prefer Phase Boots over Power Treads on Templar Assassin any day since it performs so well on a Psionic Trap detonation -> slow the opponent -> sprint and cover the distance -> Meld strike ->->-> rinse repeat.
Blink Dagger is just the signature on the bounty slip. Incredible for escape, priceless for Meld strike engage, near guarantee on a rune collection and abusable for Psi Blades angle setup.

All the situational items for Templar Assassin are based on your opposing 5 heros and their presented threats. Ultimately if your job has been done well, your snowball will grow so fast you could even fiddle with an Aether Blade + Dagon combo for ultimate mid-top end humuliation.

Counters and other Problems:

Templar Assassin has many strengths and few weaknesses, but one fatal flaw.

Like all other carry heros if Templar Assassin gets horribly ganged or somehow roughed out of lane and denied a start, she will struggle to efficiently contribute to the teams’ chance of winning. The easiest way to give Templar Assassin a hard time in lane is with certain ranged Damage Over Time ability heros such as Huskar, Viper, and most prominantly Venomancer. Just one very easily landed attack will shred the defensive Refraction counters making it very easy to get some actual damage and harrassment going.