A quick guide to Leon built as an early-game ganker and then transitioning into a pusher / backdoor threat.

This build is meant for pubbing and focuses on disrupting the enemy team by: 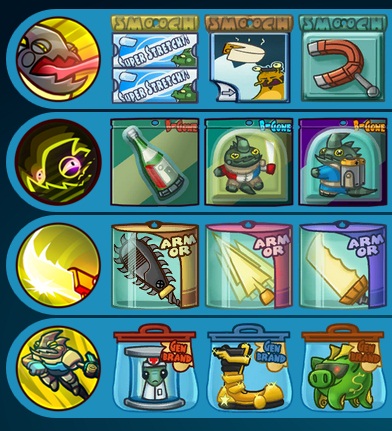 At the start of the match, pick up a Piggy Bank and purchase Tongue Snatch, Cloaking Skin, andMagnet Piercing.

Prioritize farming Solar over getting kills as you still don’t have much damage at this point.

Cloaking Skin should allow you to escape ganks whilst farming.

2 levels of Backstab Blade early should allow you to kill enemy nauts who are caught out of position with ease. If you can’t find opportunity for kills however, then continue farming.

At this point, the skills you choose will depend on the current situation

*Do enemy nauts escape you because they run faster than you?
Get Boots!

*Do enemy nauts escape you because they have an easy snare or a dash skill? (Froggy G, Vinnie&Spike, Genji, Derpl, Raelynn)
Grab Silence Tongue!

* Do enemy nauts keep out of reach because they can fly for extended periouds? (Yuri, Vinnie&Spike)
* Do you have a naut on your team that can plant hazards on the map for you to pull enemy nauts into? (Yuri, Derpl, Gnaw)
Upgrade your Tongue’s reach!

* Do you find yourself taking too much damage or harass?
Get a Med-i’-can or 2!
Or Pinot Noir to regen while cloaked.

If you were able to secure some kills during the early game, then the enemy team should be more cautious of you and tend to group up. If they group up, push the other lane so they’ll split-up to defend or risk losing a turret. Try to get more kills whenever they’re split-up.

Once you have the Extra Battery Pack upgrade, you can now backdoor turrets/drill by running close to the turret and dropping a clone, let your clone tank the turret while you attack. Having health regen at this point is nice because you’ll be taking some damage when doing this. Be careful as yourCloak will be on cooldown whenever you use the dummy to tank the turret for you so always watch your minimap to see if enemy nauts are coming for you and bail out. Alternatively you can just attack it and save your Cloak for when you have to bail out.

Once you have the Aggressive AI Chip upgrade, the clone will now attack with the same attack speed as you do but with only half your damage. Still, the pressure of you and your clone attacking a turret/drill will destroy it pretty fast if the enemy team doesn’t react.

Maximize attack speed and damage for your auto-attacks.

Always remember that every bit of structure damage brings you closer to winning as it isn’t something the enemy can get back, but you should absolutely avoid dying when doing this as this will give the enemy breathing room from your pressure and might allow for a comeback.

Why health regen instead of max health increase?

2 Med-i’-cans combined with Pinot Noir upgrade gives you a whopping 500 health per minute or8.33 health per second whenever you are in stealth. This allows you to keep pressuring enemy turrets/drill with very little downtime in-between backdoor attempts as you’d only need 5 to 15 seconds to get yourself back to full health (provided you do not die).

Why Piggy Bank and not Solar Tree?

Piggy Bank allows you to get Tongue Snatch, Magnet Piercing, and Cloaking Skin right at the start of the game – giving you a safe early game with opportunity for kills and farm.

Piggy Bank gives you an extra 115 Solar for free, while Solar Tree needs at least 6 minutes for it to give you more than 115 Solar (8 minutes if you count the 50 Solar cost you used to upgrade it). Getting Solar Tree also means you cannot have both Tongue Snatch and Cloaking Skin right at the start because of the 50 Solar cost.

Thank you for your time reading this guide. I’m sure you won’t win 100% all the time with this build but I hope it helped you even just a little bit with your games. Don’t forget to have fun and also try to experiment with it to see what suits you.